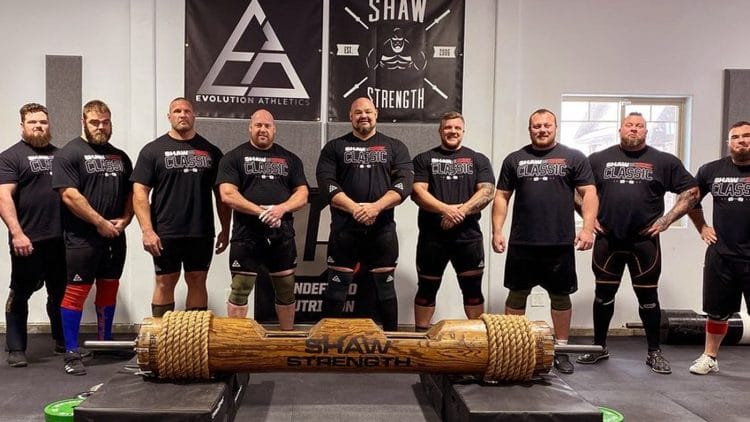 Strongman Brian Shaw is a very busy man these days. He recently announced plans of making an even bigger house with an (somehow) even bigger home gym and earlier today Jan. 11, 2022, he dropped some BIG news regarding his Shaw Classic 2022 event and the return of the “SHAWSTRENGTH” Podcast via his YouTube channel.

The third annual Shaw Classic is scheduled for Aug. 13-14, 2022 from inside the Budweiser Event Center in Loveland, CO.

The best part about this stacked list is that it’s not even finished yet! Brian said that he’s still waiting on some names to confirm their participation. Now let’s dissect some of these names to give a perspective on what to expect.

If you ever watched a Strongman competition on tv or youtube at any point in the last 15 years, you’ve seen “Big Z” in action. The man is oftentimes being called “the Michael Jordan of the Strongman world” and just taking a quick peek at his Wikipedia page will tell he’s worthy of that title. His log lifting ability is a thing of beauty that not even the younger guys can replicate.

The same thing as Big Z, if you ever saw a youtube video from a Strongman event or saw WSM on tv at any point in the past 10 or so years you probably saw the bald towering American dominate everyone in sight. Over the years Brian has won titles and broken many records. One of his career-defining achievements has got to be the fact that he has won the World’s Strongest Man contest 4 times. Which is a feat only a select few Strongman have managed to achieve.

The other big news regarding the Shaw Classic is that it will be featuring an “Open” division for both men and women. It will serve as an “Amateur” or “qualifying” contest for next year’s Shaw Classic event as the “Men’s Open” winner will be receiving an invitation to compete with the “big boys” at the main show. Brian has stated that to compete at the Men’s open or Women’s open you just have to be a Strongman/Strongwoman. No resume, no prior qualification, or anything will be required for you to compete in the “Open” division.  Even though Brian said “no qualification” or “pro card” will be needed to compete in the “Open” division, I’m guessing a certain strength level will be required for the selected for competition.  At this moment, Brian also didn’t expand on how to sign up for this but I’m sure this will be elaborated very soon.

“We want to give an opportunity to up-and-comers.”

Now, this is speculation on my part but something is telling me Brian will be expanding on the concept of the  “Open” division in the near future. At this point, the requirements for competing are basically “just be strong enough to lift this” and the winner gets a shot at the main show.  This should bring a lot of casual lifters out of “hiding” and into the limelight because the risk to reward ratio is heavily favored in their favor.

I would also believe that the Woman’s “open” should be getting more spotlight should it do well in its first year.