TikToker Libby Christensen praised a man at the gym for keeping to himself. 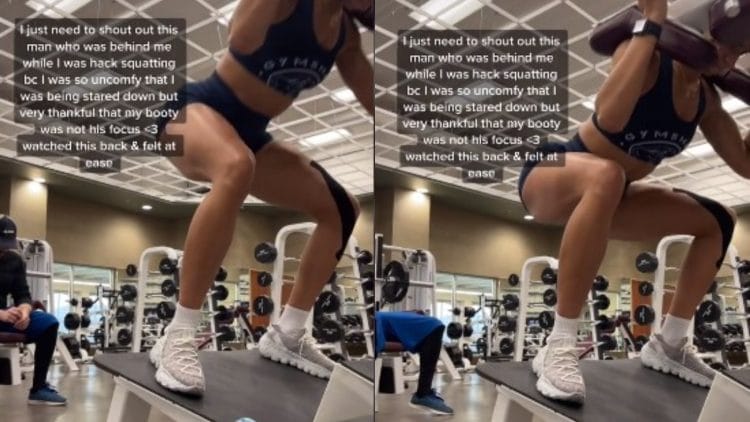 Lately, more and more strange encounters have been occurring in the gym, most of these interactions end up on camera too. Recently, TikToker Libby Christensen shared a video in which she praises a man for minding his business while she works out in front of him.

The Tiktoker began her workout and recorded the entirety of the routine. While doing weighted squats right in front of the gentlemen, the unidentified man in the hat is seen looking down and away from her body. It’s refreshing to see a young man respecting women even when being recorded unknowingly.

Sometimes these types of situations worsen, as there have been a number of cases with ladies encountering problems at their local gyms. The issue has evolved into a stubborn problem. In one particular case, a TikToker claimed that a man followed her home from the LA Fitness that she was working out at.

READ: Female TikToker Found a ‘Life Hack’ That Keeps Men From Bothering Her At The Gym

Following the aforementioned case, law enforcement got involved and the stalking situation was dealt with accordingly. Suffice to say, problems like these seem to keep surfacing for women participating at local gyms.

Gym TikToker Thanks Man For Not Staring At Her Butt

Taking to the streaming platform, the TikToker happily shared her viral video to give thanks to the gentlemen who treated her body with respect. The fitness enthusiast also thanked the man for his kind service.

“ty for you service kind sir. the TikToker @libbychristsen shared.

“I just need to shout out this man who was behind me while I was hack squatting,” Christensen wrote in the video’s overlay text. “I was so uncomfy that I was being stared down but very thankful that my booty was not his focus.” She even said that watching the video back made her feel “at ease.” TikToker @libbychristsen shared.

In response to the viral video share, commentators flocked to respond to the TikToker about the situation that could have easily devolved into something worse.

“There’s more guys doing everything they can to make sure it’s very clear they’re not staring at women in the gym,” someone commented.

Related: Joey Swoll enlightened a TikToker who was making fun of a gym-goer’s workout routine

While some commentators thought Chistensen’s outfit was to blame for any unwanted attention, other commentators aren’t buying that idea. After hearing such claims, another person took to the comment section in an effort to defend the TikToker’s choice of clothing.

“A woman’s outfit has nothing to do with how comfortable she feels when working out.” @ashleymatteson5 wrote.

While women being bothered at gyms is still an issue today, it’s safe to say that men are beginning to address the problem. In fact, some men are starting to feel uncomfortable themselves when a woman is wearing inappropriate clothes at a gym. Certainly, there is room for growth on both sides, as the problem has become pervasive regardless of where one lands on the gender spectrum.