Nick Best continues aging like fine wine, as he throws around 600 pounds just days before celebrating his 54th birthday. 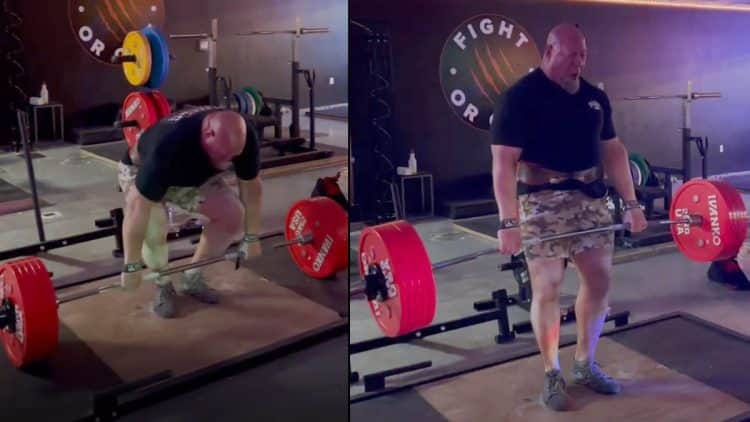 Strongman legend Nick Best has continued to push past his limits as he got into his 50s. Nick’s insane feats of strength in the training room still often leave much younger gymgoers envious. This was the case in a recent post seen on Nick’s Instagram, as Best smashed through a massive 600-pound (272-kilogram) deadlift for 16 reps just five days before turning 54-years-old.

Nick Best first gained attention as a world-class Strongman athlete, having built an immense legacy in the sport. Best was a consistent threat at the World’s Strongest Man competition, where he competed for a total of ten times during his career. His best performance got him a sixth-place finish at the 2010 WSM. However, he chose to step away from the sport after 36 International Strongman contests to compete in powerlifting. Of those 36 competitions, Nick managed to win three and stand and numerous other podiums. His wins came at:

Best competed in the 140 kg weight class of the Masters (50-54 years old) age division in May at the 2022 WRPF FQ Classic 2 powerlifting competition. He put in an impressive performance and set the new WRPF Squat & Deadlift Masters’ World Record. He managed to squat a massive 821.5 lbs (372.5-kg). While Nick needed knee wraps to perform this squat, he managed to pull off an insane 744 lbs (337.5-kg) deadlift raw. It is also worth noting he came in considerably underweight at 138.1-kg and walked away with all 4 of the WRPF Masters World Records in the 140-kg weight class.

The 53-year-old recently announced his comeback to Strongman, having made his way to Columbia, Missouri in July for the 2022 Clash of the Masters Invitational. Despite it being his first show after returning to the sport, Best managed to lift a huge 700-pound (317.5-kg) 13-inch deadlift for eight reps in preparation for the show. He only used a deadlift suit, lifting belt, and lifting straps to perform the exercise. He also elevated the bar to 13-inches by placing two small boxes under it.

In a recent post on Instagram, Nick Best smashed a huge set of 600-pound (272-kilogram) deadlifts for 16 reps in an age-defying lift just five days before turning 54-years-old.

Nick Best can be seen performing the exercise at a steady pace using a lifting belt and lifting straps. He also performed the set by using a conventional stance.

Nick Best’s comeback at the Clash of The Masters was a historic one for the Strongman veteran. Despite being away from the sport for over two years, Nick finished third at the show, with only Tim Filus and Travis Ortmayer getting a higher placing. Although he did not come out victorious, Best proved he still has what it takes to compete at the highest level.

Nick Best completed a massive 700-pound deadlift for 10 reps at the contest, displaying the smooth form and steady pacing. So, with his recent mind-blowing 16-rep set, Nick proved that the higher volume deadlift sets are his greatest prowess. If recent updates are any indication, Best will continue to age like fine wine and achieve new goals in his fitness journey.