Cormier discussed the timeless debate between aesthetics and size while comparing a number of Men's Open contenders for this year's Olympia. 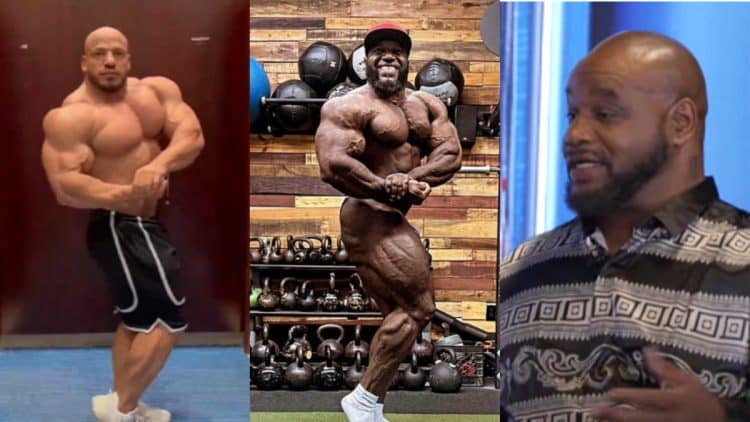 A veteran of bodybuilding, Chris Cormier has developed an eye for the sport after leading a successful IFBB career for over two decades. In a recent episode of Prime Time Muscle, Cormier tackled the aesthetics versus size debate and which bodybuilders might blend those qualities best at 2022 Olympia.

Discussions regarding size and aesthetics have been around for a while and were especially prevalent during Dorian Yates‘ dominant six-year Olympia reign. He ushered in an era of mass monsters, who have staked their claim in the IFBB with shocking muscularity and overbearing size.

While Yates’ time on top came to an end, mass monsters in the Open still dominate today. Currently, two-time Mr. Olympia Mamdouh ‘Big Ramy’ Elssbiay is sitting on the throne and plans to replicate the success he had last year with size and conditioning.

While Ramy made his career with an astounding level of mass, there are some Open class bodybuilders Cormier feels could push the champion. In his latest effort to discuss 2022 Olympia, Cormier compared the physiques of several Men’s Open competitors who boast aesthetics and/or size.

“These are the cream of the crop. These are the big boys of the sport. Judging from the back of Ramy, sometimes he has some issues back there in the lower area of the body but like you say, the overall body of work is there. His posing is pretty good for a big guy like that,” Chris Cormier explained.

Cormier believes Ramy is strongest from the front and added that judging his physique using a video/magazine isn’t the same as in person.

“From the back, I think his [Ramy’s] strong point is from the front. Just being up there close to these guys — it’s a totally different ball game than judging from a magazine or from a video.”

After winning the 2022 Vancouver Pro earlier this year, Cormier predicted that Iain Valliere will be at his best when he takes to the stage this winter.

“When you see Iain in person, he has a very ginormous type of back. That’s some of his best poses from the rear and the front lat spread. These guys [Ramy and Walker] are ahead of Iain, you know obviously. He’s a fighter. He’s going to have a strong off-season. It’s probably going to be the best Iain Valliere we’ve seen so far.”

According to El Guindy, who judges IFBB contests, side poses are more favorable for mass monsters due to their muscle density.

“When a mass monster shows up with lines on their hamstrings, lines on their quads, in the midsection you see some separation. The stomach is not [hanging] forward. You don’t see that big gut. The side poses are favorable to the mass monsters because then they can display their density as they pose,” El Guindy shared.

Cormier said Nick Walker may struggle from structural limitations like a long torso and short pecs, however.

“Nick. He’s strong in a lot of shots and he’s a hard worker. I feel like he’s going to be improved from this [2021 Olympia]. Judging from his Instagram, he’s way ahead of the game this year,” Cormier said.

“He just been focused on that Mr. Olympia the whole year. He’s structurally challenged a little bit. I feel like the pecs are kind of short. He has a lot of torso from up to the sternum. If he had more width, that may change the dynamic of his physique.”

Moving on to the aesthetics segment, Cormier and El Guindy examined the physiques of Brandon Curry, Hunter Labrada, and Akim Williams.

In Cormier’s opinion, Akim Williams is a ‘hybrid’ because he has the aesthetics but also the qualities of a mass monster.

“Speaking of Akim [Williams], keeping it there. The side of his leg can also go up against Big Ramy’s. I mean, he’s like a hybrid. He’s borderline mass monster, he’s borderline aesthetics just because the tight waistline but Akim can definitely do some real damage in the show,” Cormier explained.

When contemplating who could win 2022 Olympia, Cormier said Curry could get his title back if he puts everything ‘together.’

“Brandon Curry — former Mr. Olympia — he can always do it again. All he has to do is put it together. He’s out there in Kuwait right now doing so. I feel like his physique is one that can actually get that title back. He’s a past winner that can actually do that.”

“I love it, the tight waist, the quads flaring, the definition all the way up to the hips. The Sartorius muscles are all standing out [in these front double biceps pose]. This shows [Brandon Curry’s] shape. This is where he’s either a hybrid of aesthetics but also can hang with the mass monsters because of the dynamic of his physique.”

“Hunter Labrada, he’s mass with class all day. Being the son of [Lee Labrada], having those genetics going for you but actually bigger than your father,” Chris Cormier said.

Before ending the discussion, Cormier compared William Bonac with Hadi Choopan. Despite his smaller size, Cormier believes Choopan has the graininess to stand up against a mass monster like Big Ramy.

“The ‘People’s Champ’ [Hadi Choopan] is always hard. I like him because he’s the one guy that stands next to Big Ramy and it don’t matter. It don’t matter. He looks like a mass monster but he’s just shorter. He also has the graininess of a hybrid competitor that can go against a smaller guy and a bigger guy.”

This isn’t the first time the size versus aesthetics debate has come up. In August, top Men’s Open competitors Iain Valliere and Blessing Awodibu fired shots at each other while discussing the topic. Awodibu thinks judges will soon favor aesthetics more than size at bodybuilding shows. However, Valliere believes Classic Physique should showcase more aesthetic builds, not the Open.

While Ramy has dominated with size over the past two years, Cormier specified that ‘hybrids’ like Akim Williams could shake up the competition. Fans can expect an exciting battle between size and aesthetics at the upcoming 2022 Olympia.