Nick Best smashed through eight reps of 700 pounds in preparation for a Strongman competition. 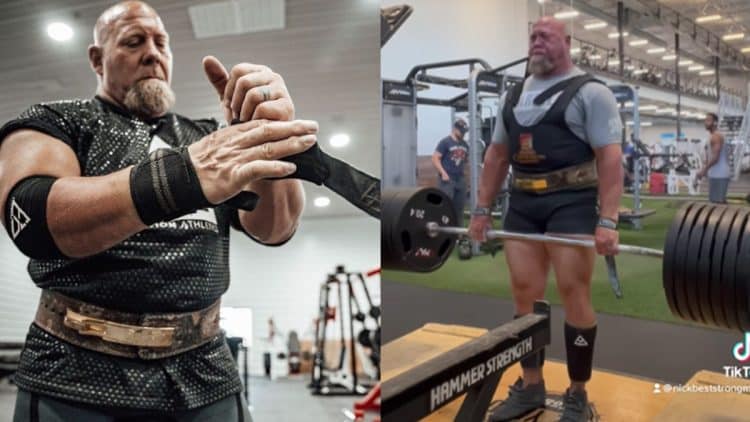 As Nick Best’s training feats of strength constantly prove, he is aging like fine wine. At 53 years old, Nick is not slowing down with his training and is still pushing himself to the absolute limits. Obviously, Nick has made a name for himself in the sport of Strongman, however, in recent years he has become more interested in powerlifting as well. As a result, he developed great deadlifting skills, which he will soon demonstrate in a competition. However, for now, we only get to see his training accomplishments. Most recently, Nick crushed a 700-pound (317.5-kilogram) 13-inch deadlift for eight repetitions.

Nick Best used a deadlift suit, lifting belt, and lifting straps to perform this set. He also used two smaller boxes in order to elevate the bar to 13-inches. According to his Instagram caption, Nick is training this way in preparation for the 2022 Clash Of The Masters Invitational. This competition is set to take place on July 23, 2022, in Columbia, MO. One of the events will be the 13” Train Wheel Deadlift, where competitors will have 60 seconds to perform as many reps as possible. Nick Best will definitely be one of the favorites for this event.

Nick Best has had a lengthy Strongman career, as his first professional competition came in 2006. Since then, he has taken part in 36 International and five National competitions. He finished first three times, while his most notable achievement is taking part in ten separate World’s Strongest Man contests. His highest placing out of these ten was in the 2010 WSM where he finished sixth.

Before starting Strongman, Nick Best first trained in powerlifting for a very long time. He then chose to put it aside when he moved to Strongman, but ultimately came back to powerlifting in 2016. In total, Nick took part in 33 sanctioned competitions and tallied up 20 victories.

Apart from his professional performances, Nick Best was also featured in a successful TV show called “Strongest Man In History”. He was one of the show’s main characters alongside Brian Shaw, Robert Oberst, and Eddie Hall. Well, according to Robert Oberst, they will continue their adventures in season two of the show. Despite having a busy schedule, Nick Best will somehow find the energy to join the crew once again, which is beyond impressive.