Priest discussed taking Deca at a young age and how he's been able to retain muscle mass for most of his life: "I've Always Kept Training." 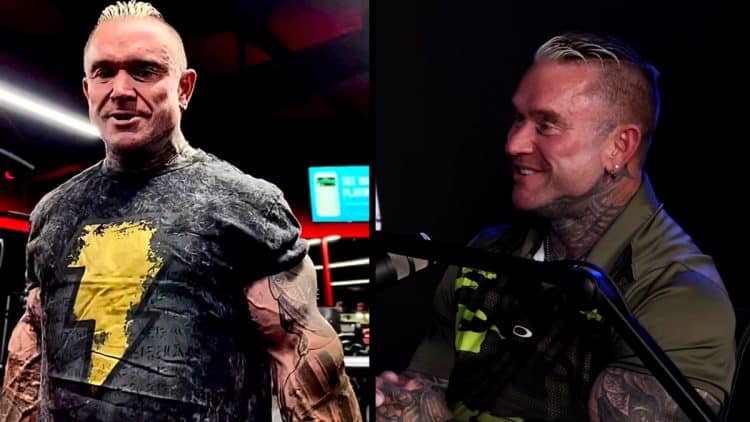 Australia’s Lee Priest proved himself with granite conditioning and competed for over two decades. In a recent video, the retired veteran discussed taking gear and retaining an impressive amount of muscle mass throughout his career.

Lee Priest sported arguably some of the best biceps in the league during his prime. His long-lasting tenure saw him face a number of Mr. Olympia champions on stage, like eight-time winner Ronnie Coleman, four-time champ Jay Cutler, and Dexter Jackson.

While he was never able to win a prestigious Olympia title, Priest competed at the show several times and gave elite talent a run for their money. Since walking away from bodybuilding in 2013 after winning the NABBA Mr. Universe, Priest has been an open book. In late July, Lee opened up about one of the ‘small’ cycles he used to keep up with many of his opponents.

In his latest endeavor, Lee Priest joined Spanian’s The Search Podcast to discuss taking gear, his physique, and how he’s managed to retain much of his size since retiring from the sport almost ten years ago.

Note: Fitness Volt does not condone and/or recommend the use of recreational or performance-enhancing drugs. This article reports on information relayed by the athlete. Fitness Volt is not a medical resource and the content provided to you is for informational purposes only.

Lee Priest on Taking Deca at 19: ‘I Looked Like a Miniature Dorian Yates’

During the interview, Priest reflected on taking Deca (Nandrolone) at the age of 19. He says he took 200 milligrams in eight weeks. As a result, Priest added 20 pounds of muscle and looked like a ‘miniature’ Dorian Yates.

“At the end of the year [when I was 19], when I’ve taken Deca, I took 200 milligrams in eight weeks, and I put on 20 pounds of muscle. I looked like this little miniature Dorian [Yates]. You could tell when I went on it pretty quick.

Priest Reflects on Cycles and Maintaining Mass: ‘I Train and Eat Every Day’

Priest had his first neck operation in 2015. At the time, he didn’t want to take Deca again but started the regimen anyway. As of late, Lee admits to taking Sus 250 to facilitate his recent physique transformation.

“I think just because I’ve always kept training. That’s the thing is after my car accident in 2015, I had my first neck operation. I took a bit of Deca. And I thought, ‘ugh fuc**ng hate taking gear again.’ It was until probably this year I started using a bit of test, like Sus 250, one mill every eight days — I was doing that transformation thing for Species, my sponsor.”

Priest says he’s been able to keep muscle mass most of his life because he continues to eat and train often.

“That’s what I was taking. Up until that, people were saying, ‘you must be on gear.’ I’m like, ‘why?’ They said, ‘how do you keep your muscle?’ I still train every day. I eat. Why would my muscle disappear. Like sure, if I stop training, muscle will atrophy. If you’re not eating enough, you’ll get smaller or if I stop training, but I keep eating a lot of food I’ll get fatter.”

When Priest came off cycles during his career, he remembers only losing around five pounds of water weight.

“I just kept training the whole time. I always had a good base foundation. I never really lost size. Even if I came off a cycle, I might drop five pounds of water weight,” says Lee Priest.

In addition to gear protocols, Priest explained why his eating habits have helped him maintain muscularity.

“I can almost have two meals a day and I won’t lose any size. Whereas my friends are saying they needing six meals. If I’m busy now, or getting busy during the day, I hate stopping to eat. I go six, seven hours without eating. Eat at night, go to bed. I’ve been lucky that way.”

Priest recently underwent a physique transformation, which elicited a strong reaction from the bodybuilding community. At age 50, many of Priest’s strongest attributes, like his arms, look massive.

Olympia President Jake Wood announced that Masters Olympia would ‘definitely’ be returning in 2023. While the show’s return is just rumored at this point, many believe Lee Priest would fit right in at the competition.

According to Chris Cormier and IFBB judge Terrick El Guindy, the Men’s Open age cap is expected to be set at 45+. In the past, Priest has dismissed a Masters return but mentioned he would seriously consider a comeback if they made the age cap 50 and over.

Despite leaving the sport on top, it’s evident Priest still appreciates many of the practices that guided him to success. He credits his lasting muscle mass to training and eating consistently in retirement.