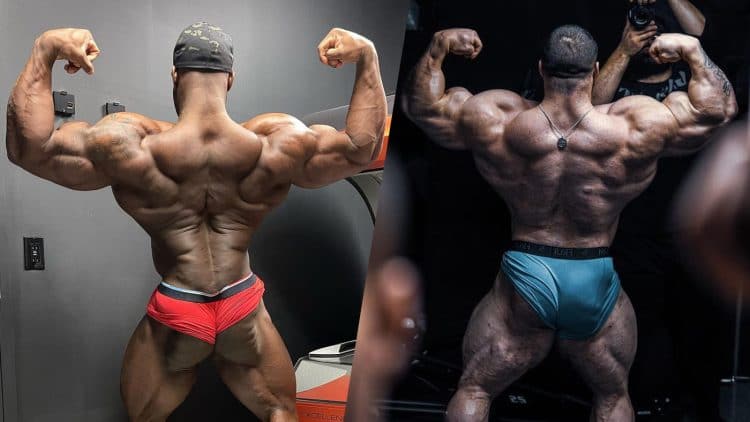 2021 Arnold Classic winner Nick Walker recently collaborated with another up-and-comer in Quinton ‘Beastwood’ Eriya for a back workout. One of the highly touted prospects, Walker has established himself as a serious contender for the Olympia crown by winning the 2021 New York Pro and the 2021 Arnold Classic within one year of earning his IFBB pro card. The Walker-Eriya duo had some interesting conversations on a variety of topics and Walker shared the workout video on his YouTube channel.

Quinton Eriya is a Canadian IFBB Pro bodybuilder and another rising prospect in the open pro division. Eriya took a long leave of absence from the sport after his eighth-place finish at the 2020 New York Pro and returned with an impressive showing at the 2021 Romania Muscle Fest Pro (5th place) and the 2021 Toronto Pro Supershow (2nd place). The workout was Walker and Eriya’s first interaction. Eriya stated that a high-rep workout for every muscle group other than the chest works best for him and here is the break-up of Walker and Eriya’s back workout.

Nick Walker has never been so lean at 290lbs+

After the workout, Nick Walker and Quinton Eriya spoke about a variety of topics ranging from weight management to the current state of professional bodybuilding. Walker revealed that he was heaviest in the off-season before starting the prep for 2021 New York Pro and weighed 284lbs. His training post-2021 Olympia and high-rep workouts have helped him stay lean at his current weight of 290lbs.

“That’s why I was so happy that I beat him… no disrespect if he’s watching the video… but I was just so happy I beat him. It just solidified that I probably won the Arnold Classic. If he didn’t compete at the Olympia, then they would have been like, “well…!” So the fact that I beat him, I was like, that’s fine,” Nick Walker said.

Open Pro bodybuilding is in a transition phase at the moment as the next-generation bodybuilders are fiercely challenging many elite bodybuilders at the tail end of their careers. Walker stated that bodybuilders like him are circling in to claim the top spot. After his 2021 Mr. Olympia appearance, many people opined that Walker is too bulky for his height and frame. Mutant seems to be aware of the criticism and acknowledged that his biggest challenge will come from the taller and more aesthetic bodybuilders of his generation.

“I think the newer guys that are like more taller and aesthetic. I think that’s gonna f* me up in the long run.”

Nick Walker said that cheat days are his way to get a mental break more than satisfying his craving. Walker added that he plans his cheat days on weekends to be able to socialize and spoke about his routine during the 2021 New York Pro prep season.

“We would go Monday to Saturday, a pretty strict diet. On Sunday, which I trained legs, we had a – we didn’t cheat all day but I would go out and have a big breakfast and have two or three normal meals and then go out at night for a big dinner. I would gain four to five pounds. But by the time the next Sunday came, I was down two more pounds than I was from Monday of the following week. It worked. We literally did that up until six weeks out from New York Pro,” Nick Walker said.

Walker stated that his dietitian planned the diet in such a way that he reached a point where an entire cheat day would result in a pound of weight gain at maximum as the metabolism increased over time.

“It’s like when you get into that fatigue stage, he wants to load you up to keep you going for the first half of the week. Then the rest of the half for that Sunday, you’re f*d. Then you redo it. So I understood it and it worked. It’s a good way to go about it,” Nick Walker said.