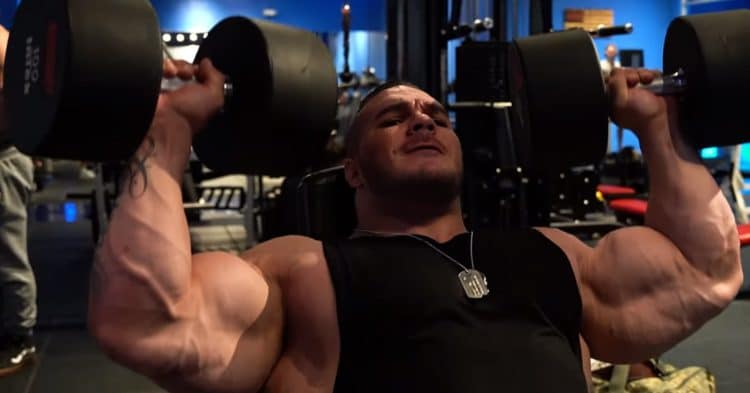 In preparation for 2022 Mr. Olympia, Nick Walker looks to be hard at work in the offseason and getting in a good pump. “The Mutant” recently shared a video on his YouTube channel detailing a grueling shoulder and tricep workout.

While training at the RedCon1 gym in Boca Raton, FL., Nick Walker decided to test the waters of a different gym while preparing for the biggest bodybuilding show of the year. After winning the New York Pro and the 2021 Arnold Classic last year back-to-back, Walker has explained a number of times that his focus is now on improving his physique for 2022 Mr. Olympia.

After qualifying with a win at the New York Pro, Walker took his talents to the 2021 Mr. Olympia show where he secured fifth place in his first-ever appearance. With redemption weighing on his mind, Walker continues to work tirelessly in order to improve his gargantuan physique.

Here is what the session of shoulders and triceps workout consisted of:

Nick Walker shared his shoulder and tricep workout on a video posted to his YouTube channel.

“Alright guys that concludes our shoulder and tricep workout. So we started with the Atlantas seated side lateral machine. That was a new one for me, I really liked that one. I did about three working sets there to a double drop. Then we went over to the Atlantas standing Viking press type thing. That worked out really good, we were able to go really heavy on that one. I only did 2 sets there, one set 8-10 and one set 12-15. From there we went to the reverse pec deck, where we did about two sets of 15-20 reps to a double drop set there. Nick Walker shared.

Then we moved over to the dumbbell shoulder press. I did, just two working sets there again, 12-reps and then cable single-arm side lateral raise, 3 sets, 10-12 reps. Then we moved over to the rope pushdowns, with a different type of grip. Three working sets there till a double drop. Then we moved over to the Panatta tricep overhead extension machine. That felt really good. That was a new one for me. Three sets there, 10-12 reps and then we end it with the Panatta dip machine. Three sets, 12 reps there, no drops or nothing. Three straight sets. Then I end it, with a Panatta lat pull down, to keep blood into my lats and keep them nice and pumped. Three sets, 10-12 there. That machine felt really good.”

Walker added that his weight is steadily increasing and is pushing 300lbs currently. With his diet steadied, the young yet disciplined bodybuilder is looking forward to what another year in the sport will bring.

“The weight is steadily going up. I’m about 295(lbs), 294 in the morning. The weight is going up, going up slowly, which is good for me. Diet hasn’t really budged much, weights just kind of doing its thing.” Nick Walker said.

Walker is always looking to make improvements. Walker admits the last time he was at RedCon1 was with Blessing Awodibu where the pair of bodybuilders got busy with a crushing leg day. With his focus fixated on the 2022 Mr. Olympia title, Walker is making the most of his time.

Given the freakish build of “The Mutant”, many fans believe that Walker will use this offseason time to achieve a better placement at the upcoming Olympia show. While that remains to be seen as of yet, it appears Walker is making the necessary sacrifices in the gym to help facilitate an even more jaw-dropping physique.