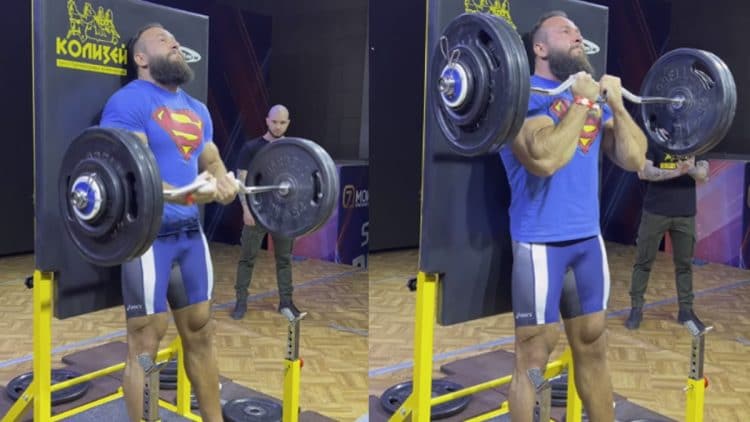 Following Walker’s strict-curl world record in 2021, Russia’s Tagiev rejected the validity of the lift after it was deemed controversial. In response to Leroy Walker‘s record, Tagiev responded with a video of his own lift where he added one kilogram to Walker’s record by hitting a strict curl of 115 kilograms. However, Walker’s lift was done in an official competition sanctioned by the National Powerlifting Committee (NPLC) and Tagiev’s record (at the time) was not, therefore it wasn’t counted.

Nizami wasn’t the only person to set a world record at the Siberian Power Show. Podoshevkina Inna curled 52.5 kilograms, which was enough weight to achieve the women’s strict curl world record. Sakovich Oleg set a record in the 85-kilogram weight class by curling 105 kilograms, 20 kilograms more than his bodyweight. Though, it was Nizami who likely walked away as the biggest winner.

Tagiev is calling this lift an all-time world record because of the controversy surrounding Walker’s prior record. He rejected Walker’s strict curl, questioned his form, the wall, the way he was being handed the barbell, his grip width, and the amount of weight.

Check out Nizami Tagiev’s recent lift in the video below.

The tension between the powerlifting juggernauts continues to build. On the heels of Walker’s 2021 strict-curl record, Tagiev refused to acknowledge it and instead, recognized Dennis Cyplenkov’s 113-kilogram lift as the legitimate former record. Those who have challenged Walker’s record, believe his elbows were bent too much in the starting position which can give an advantage since the range of motion window becomes shortened.

Others have mentioned that Walker’s grip was too narrow, suggesting that he may have been handed the barbell by spotters. In addition, some have critiqued the way in which the weight was loaded on the barbell. In spite of all those purported issues, the NPLC reviewed the lift and deemed it to be acceptable.

In order for a strict curl record to be green lit, a competitor must follow a number of rules. The head, upper body, and glutes must remain against the wall. In addition, heels must be 12-inches from the wall and legs cannot be used to assist during the lift. The weight must be in a fully-curled position near the throat or chin. Competitors also must control the weight at the peak of ascent and hold it until a judge can verify and give the down signal. Lastly, the lifter can opt to perform the exercise with an EZ or straight barbell.

Starting his powerlifting journey in 2011, Tagiev has been improving and slowly adding weight to the rack in order to separate his name from the rest of the pack.

It appears Russia’s Nizami Tagiev is only scratching the surface as a competitive powerlifter. After matching the strict-curl record with a recent 114 kg lift, fans are beaming with excitement as they anticipate Tagiev’s next sanctioned competition.