In his latest video, bodybuilding royalty Ronnie Coleman can't believe his eyes after watching some unorthodox lifts from Bradley Martyn. 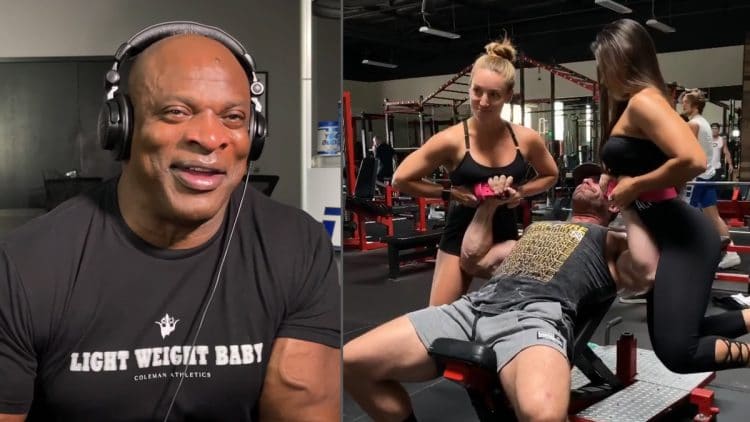 Retired IFBB Pro and eight-time Mr. Olympia Ronnie Coleman took a rest from lifting weights to watch YouTube personality Bradley Martyn pump some iron instead. In a recent video published on his YouTube channel, Coleman shares his raw reactions to some of the craziest and most jaw-dropping lifts shown by Martyn.

Coleman is regarded as one of the best bodybuilders to ever perform on stage. During his furious reign, he captured a total of eight Mr. Olympia titles, a feat which has only been accomplished by fellow bodybuilding legend Lee Haney. Known for his intense rivalry with the comeback kid Jay Cutler, Ronnie’s reign as Mr. Olympia champion ended in 2006 after Cutler edged him out for the victory.

While his days competing as a Pro are behind him, that hasn’t stopped Ronnie from remaining active in the sport of bodybuilding. Every year, “The King” hosts the Ronnie Coleman Classic, which pits amateur competitors against each other to determine who walks away with a Pro card. However, Coleman hinted months ago that his next event in 2022 might be a Pro show instead.

Meanwhile, YouTube sensation Bradley Martyn has remained in the headlines as of late given his wild training videos. While the lifts are pretty hilarious due to their unpredictable nature, Bradley has proven himself to be more than capable of hanging with some legitimate talent in the fitness world.

In a recent video shared on YouTube, Coleman is stunned by some of the wild lifts featured by Bradley.

The video starts with Bradley deadlifting an undisclosed amount of weight showing several plates on both sides of the bar. Each plate read 45lbs apiece, so surely, it was a challenging pull. A few plates begin to fall to the ground and Bradley shows his chalked hands covered in ripped calluses and bloody blisters. While he may have incurred some damage to his hands, Ronnie was quite impressed with the overall lift.

If that wasn’t shocking enough, Bradley proceeds in the next clip by sniffing smelling salts, body painted and dressed as Kratos from the PlayStation gaming franchise, God of War. During the footage, the mythical god deadlifts 675lbs for at least one clean rep. Following the Kratos deadlift, Bradley starts pressing with a dumbbell in one hand and carries a young female in his other. Then, Martyn moves to the bench press where he begins pumping a barbell in each hand with plates amounting to 225lbs apiece.

In what Ronnie deemed ‘the most impressive thing he’s seen in his life’, Bradley is balancing on a hover board while deadlifting a total of 375lbs for a couple reps. Bradley continues the streak of insane lifts by pulling off a farmer’s carry while pulling a woman on a weight sled behind him. After witnessing the clip, Ronnie deems the farmer’s carry as ‘super strength’ since the total weight amounts to roughly 775lbs.

The next clip shows Bradley in the rain, bench pressing in the middle of a seemingly busy highway. In addition, Bradley is shown pushing a weight sled totaling 1,000 lbs. Finally, Bradley wraps the video with a one-handed deadlift, while performing dumbbell curls with his other hand.

Last month, Ronnie was featured in a video where he reacted to a compilation of ‘greatest gym fails‘. It’s always fun to see a decorated legend like Coleman keeping things light in retirement.

While many of Bradley’s lifts were unconventional, it seems the hover board deadlift is what Ronnie considered the most impressive by the end of the video.