Nick "The Mutant" Walker is making gains in the off-season as he aims to add mass to his physique while still keeping his waist slim. 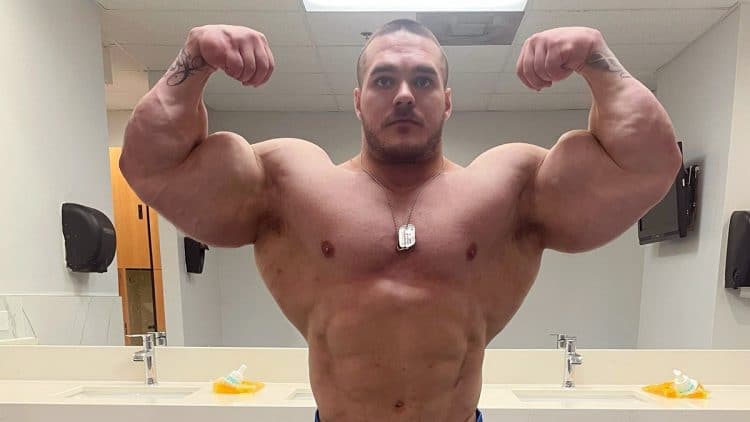 2021 Arnold Classic champion Nick Walker is steadily adding mass to his physique as he aims to bring a refined package to Mr. Olympia later this year. In a recent physique update, Walker shows off an impressive V-taper and huge arms.

Walker’s short time in bodybuilding has been meteoric. Within a year of claiming his Pro card, he won the 2021 New York Pro and the Arnold Classic. His Arnold victory was even more impressive because the Men’s Open competitor predicted he would win the show and backed up his words.

Instead of defending his title in Ohio last month, Nick opted to take extra time away from the competition to prepare his physique for 2022 Mr. Olympia. Following back-to-back victories in 2021, Nick impressed at the biggest show of the year by placing fifth.

The 27-year-old routinely shares his training progress and provides glimpses into his off-season preparation. As of late, he got to work by hitting leg day, and focused most of his efforts on training the quads. Nick had an amazing rookie season last year with the help of his former coach, Matt Jansen. While the duo achieved a lot together, Matt and Nick separated with no hard feelings. Despite no longer working with “The Mutant”, Matt wishes only the best for his former pupil. Now working with a new coach and dietician, Dominick Mutascio, the two have begun making the necessary adjustments to improve Nick’s conditioning.

In a recent post on social media, Nick Walker shows off his massive arms in a front-double bicep pose. His V-taper looks astonishing as he continues to add mass to his physique.

Nick is managing to keep his waist tight and adding mass to the areas he wants to improve. Hovering around 300lbs, Nick is addressing his prep in a thorough manner to make sure he doesn’t run into the same issues that prevented him from reaching the podium at last year’s Olympia. Achieving a Sandow-winning physique is extremely challenging, and Nick believes it can be done if he can add size and keep his abdomen less blocky when it’s finally time to perform on stage.

Despite his preference for machines, Nick has also been lifting heavy weight as he continues to improve his conditioning for the upcoming Mr. Olympia event. Nick recently pushed himself in a training session with 150 lb dumbbell curls for 13 reps.

Given the detail of his body’s silhouette, Nick’s off-season physique is a prelude to what he plans to present on stage in 2022. With the current balance of his build, Walker is going to be difficult to stand next to when Mr. Olympia returns this Dec.