The 19-year-old, Olivia Reeves, put up a sensational performance to break the American Record. 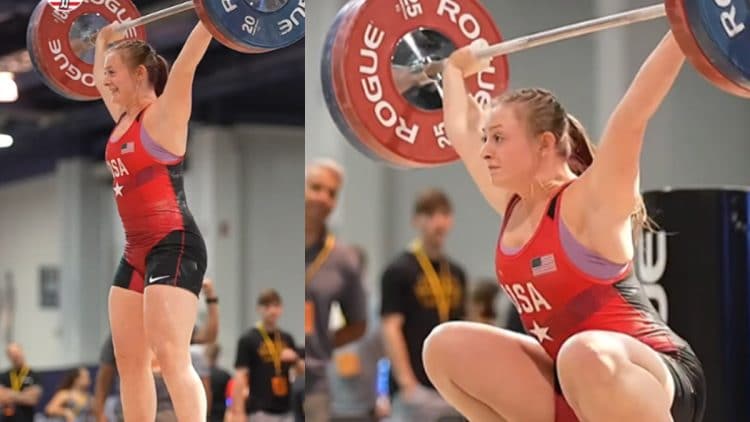 The 2022 USA Weightlifting (USAW) National Championships Week is taking place from June 25 to July 03, 2022, in Las Vegas, NV. Six days of the competition have already passed and it seems that Olivia Reeves has made the greatest impression yet. Olivia is just 19 years old and she competed in and won the Junior 71-kilogram weight class. Furthermore, she proved herself to be one of the potential candidates for the 2024 Olympic Games.

Apart from impressing everyone with her overall win, Olivia Reeves’ performance in the Clean & Jerk event is what really stood out. Olivia’s 138-kilogram (304.2-pound) Clean & Jerk was enough to break the Senior American Record. Kate Vibert held the previous record of 137 kilograms (302 pounds), which she set at the 2019 Junior World Weightlifting Championships.

Olivia Reeves weighed in at 70.72 kilograms (155.9 pounds) for the 2022 USAW National Championships Week. She progressively upped the weight on each event, and went 6/6. All of her lifts looked relatively comfortable, so it seemed like she could have added a bit more weight.

If Olivia Reeves weighed in at just 0.03 kilograms (0.06 pounds) lighter, she would have become the lightest woman to Clean & Jerk at least 300 pounds (136.1 kilograms). That achievement will remain in Kate Vibert’s possession for now.

Olivia Reeves’ Total is definitely very competitive and might even be an Olympic Games level one. However, despite her young age of 19 years old Olivia should strive to qualify for the 2024 Olympics in Paris, as it is very likely that Weightlifting won’t be in the repertoire for the 2028 Olympics. Nonetheless, Olivia could also build her reputation by performing well at World Championships.

Interestingly, Olivia Reeves did CrossFit in her early career, but she realized at one point that lifting weights is more suitable for her. It is now clear that it was the right move for Olivia, as she is quickly taking over the weightlifting scene. Her 248-kilogram (546.7-pound) Total is the ultimate proof of that, as it would have secured her a gold medal in the 2021 Senior World Championships and 2022 Junior World Championships.

Olivia Reeves has shown signs of being a potential champion for a very long time, but it now seems that she became good enough to against the few greatest competitors in the world. She still has a long way until she qualifies for the 2024 Olympics, but this is a very promising start.

Gaelle Nayo Ketchanke, 30, had a freak accident at the European Weightlifting Championships in Batumi, Georgia when she attempted to...

At 2018 Arnold Sports Festival, a Russian weightlifter was left with blood exploding from his nose before completing a nearly...

This is the painful moment a weightlifter dropped 545lbs on himself during a failed bench press. The man, referred to...