A training tip from reigning 212 Olympia champion Derek Lunsford for your delts and calves, and how to indulge in a clean cheat meal. 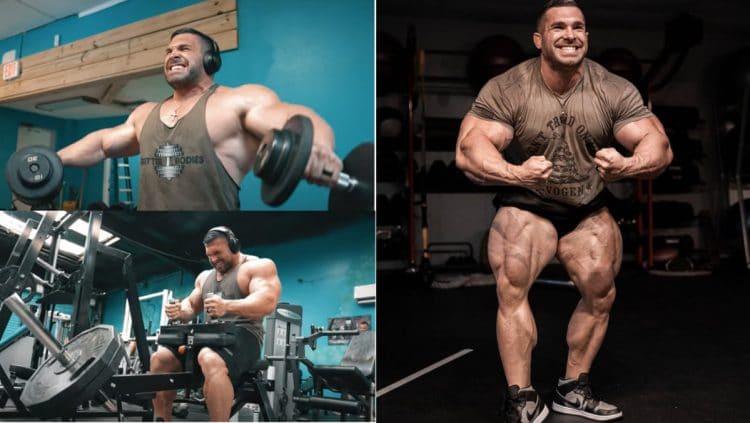 Derek Lunsford is quickly emerging as one of the most popular bodybuilders in the 212 division. In a recent video, Lunsford performed a series of exercises aimed at building bigger calves and delts in preparation for 2022 Olympia.

It didn’t take very long for Lunsford to gather steam as an IFBB Pro. The 212 standout placed second behind divisional kingpin Flex Lewis at the 2018 Olympia. He placed in second at Olympia yet again in 2019, behind champion Kamal Elgargni. Determined to break the streak of runner-up appearances, the 212 contender brought a solid package to 2020 Olympia, but found himself outside the podium in fourth place, respectively.

Patience is a virtue, and Lunsford learned that lesson the following year, as he finally nailed down first place in the 212 division at 2021 Olympia, defeating the likes of former champion Kamal Elgargni, and the “Giant Killer” Shaun Clarida. Thus far, 2022 has seen Lunsford in the spotlight due to his freaky size and massive proportions.

Those qualities were on full display at the recent 2022 Pittsburgh Pro, an event that saw the reigning 212 champion make a guest posing appearance. Many in the community were shocked to see a 212 competitor like Derek Lunsford stand next to Men’s Open mass monsters like Nick Walker, Brandon Curry, and Hunter Labrada without appearing undersized. Clearly, Lunsford’s commitment to his craft shows in the developments he’s made to his physique in the last few years.

*Some sets and reps were unclear based on the footage provided

Lunsford kicks off the training session with donkey calf raises. He believes ‘slowing the tempo down’ during calf training garners better results, especially in the fully stretched position. When performed in a slow and controlled manner, these exercises can help thicken the calf muscle.

“If you’re just up and down, up and down, really fast tempo and a ton of reps. Even if you’re doing a ton of weight and not so much reps, and you’re going really fast with the repetitions, I noticed myself, that the calves won’t grow as much as they will if you slow the tempo down and really make it burn. Especially in that most stretched position. Lunsford explained.

Lunsford deliberately performed the five sets slowly to get the most out of each rep.

“As you’re watching me to these sets, every rep I’m trying to go very controlled and a little bit slower than what I would like to go so that I get the most out of every single rep.”

“Alright we will do one more seated calf raise. We did five sets of the first exercise. Four sets of this one. We’ll do a couple sets standing. We’re going to do it a certain way that’s not my typical standing calf raise. Then that’ll be done for calves.”

According to the 212 Olympia champion, it doesn’t take much weight to get an insane pump from smith machine standing calf raises.

“It doesn’t take a lot of weight.”

For his next movement, Lunsford practiced standing dumbbell lateral raises. He admitted he was sick for a few days prior to this workout routine. While he wouldn’t call today’s training session a restart perse, he made a mental note, acknowledging where he is now, and where he knows he needs to be in the coming months.

“I definitely got to get stronger. But it’s okay. This is like the start of what’s to come. Like I said, I got sick for a few days and scaled the training back for a week. I wouldn’t call it a restart because it’s not like I’m starting over. It’s not like I haven’t been training the whole time, I can’t say that. This is a good mental note of where I am now, and I know where I need to be. And I know where I want to be.”

One pro tip offered by Lunsford was warming up the delts by starting with the middle delt. Additionally, he advocated for increasing the weight load in a progressive manner while performing on the seated shoulder press machine.

“I don’t know if it’s much of a tip as it is a preference, but I always like to make sure when I’m warming up my delts, that I start with my middle delt. Again, I start with very light weight something that’s comfortable. Then, I move to moderate weight and then moderately heavy weight.

Then, I start getting into my working sets. Definitely with the shoulders, I usually… 90 percent of the time I like to do dumbbell side lateral raises or some variation of side laterals.”

Lunsford insists that hitting the middle delt for him, typically results in a more ‘capped’ appearance. He suggested starting with the middle delt, front, and then ending with rear delt work.

“Whether it be on the cable machine or if they have a side lateral raise machine. Doing the middle delt for me, first of all, gives more of that capped delt. It has the illusion that the shoulders are wider and broader as well as it just seems to be one of the best things to warm up in the entire shoulder. Sometimes if I don’t do that, I’ll either start with the front or the rear delts and move from let’s say front to back or back to front. Most cases I will do middle delt, front delt, rear delt.”

Lunsford explained that some of the muscles in the back, like the rhomboids and traps help stabilize the shoulder, which helps the process of shoulder training.

“This is actually going to target a little bit of the back too. Why is this important, why are we wanting to train it if it’s shoulder day? Well, some of the muscles that are in the back, such as the rhomboids and the traps, are going to help stabilize the shoulder, which is going to help improve shoulder training.”

“It’s guilt free. It’s the perfect bodybuilding food. It’s like a cheat meal but not really, because it’s clean.”

His post-workout meal might be small, but Derek’s physique has many in the community questioning how long he can remain in the 212 division, given his size. Lunsford’s coach, Hany Rambod, has echoed that sentiment, indicating that ‘it is becoming very difficult for him [Lunsford] to make weight’.

Aside from his extremely healthy cheat meal, Derek has given fans a taste of his off-season diet for 2022 Olympia. Throughout the day, he consumes six meals, which typically come out to about 50 grams of protein and 60 grams of carbohydrates during each course.

It’s evident that Lunsford attacks his prep in a detailed manner. Judging by his recent delt and calves workout, Lunsford intends to make another statement when he looks to defend his 212 Olympia title in Las Vegas this December.