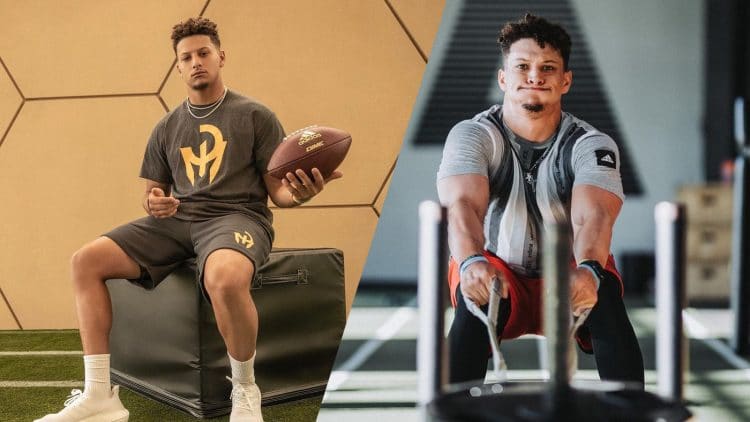 With people already giving him nicknames like baby GOAT, Patrick Mahomes is set to be one of the greatest NFL players of this generation. His pure talent is unmatched, and he can really throw the football. Pat hasn’t been in the league for long, and is already a force to be reckoned with. Patrick Mahomes joined the Kansas City Chiefs back in 2017. He wasn’t a starter in his first year. However, in 2018, Mahomes was able to make it to the first team as the starting quarterback.

As the first team’s quarterback, Mahomes passed over 5000 yards and threw 50 touchdown passes in his first year. What is even more impressive is the fact that he was able to win the NFL MVP award just two seasons into the league.  Despite not being in the league for a long time, Patrick Mahomes already has a number of accolades to his name. He won the league MVP in 2018 and was also able to win the Super Bowl and Super Bowl MVP in the 2019-2020 season.

Patrick Mahomes is the son of Pat Mahomes Sr., a former major league baseball pitcher who has taught the quarterback so much. Patrick Mahomes, in an interview, once said that he learned of the work ethic it takes to be a professional from his dad. From that, he understands that he has to put in the work every day. The 2020 Superbowl MVP knows he cannot just show up and play even if he is good or talented. Pat has to be ready, and from that, he prepares all week for his games.

As an athlete, Pat understands the importance of working out and eating well. He knows he has to keep his body in top-notch form so that he can go out there and dominate. Since Mahomes understands that, he is very serious when it comes to his eating habits and working out. With that said, in this read, we shall look to shed some light on the Patrick Mahomes diet and workout plan.

Patrick Mahomes’ main goal when it comes to his diet is to eat healthier. He once said in an interview that nutrition is something that you can’t ignore when you get to the NFL because it is what helps you stay in the best possible shape. When Pat was asked about his fitness ambitions in 2019, he replied by saying,

“I think the biggest thing for me (has been) learning how to eat better, learning how to take away the snacks, the candies, the desserts, all that stuff and just focus in on how I eat and how I take care of my body that way.”

What makes it a bit easier for Mahomes is the fact that he has a secret weapon when it comes to dieting and nutrition. His secret weapon is his fiancé and the mother to his daughter, Brittany Matthews. Brittany runs her own fitness company called Brittany Matthews Fitness. She offers workout plans and merchandise through her website. Brittany and Pat have been together since high school. In an interview, Mahomes said,

“Eating-wise, I’m blessed that my girlfriend is (big on) nutrition so she helps me out with that—she’s (about) fitness. I just try to eliminate some of the bad meals, the fast food, the foods that aren’t great for your body and don’t help you get the most out of it. I’m a picky eater, but I still try to eat healthy stuff like chicken, salmon, and all the (other) stuff I like a lot.”

He also follows Brittany’s advice and consumes lean proteins and other healthy food.

When it comes to his daily food intake, Mahomes revealed that he eats four to five small meals in a day. After having breakfast and lunch, he likes to spread out his dinner into a couple of meals. He does this to make sure he is not eating too much food in a single sitting. Mahomes does not count his calories. When it comes to snacks, he revealed that he prefers to snack on fruits such as apples, strawberries and oranges.

Most people who try to eat healthier have cheat days, and the same can be said about Pat Mahomes. During his cheat days, he likes eating burrito bowls from Chipotle, chicken biscuits from Chick-fil-A, prime ribs and barbecue with fries from local establishments in the city of Kansas. He is also occasionally seen chugging beers with his friends.

There is something baby GOAT can’t live without, and that is ketchup. Mahomes is literally the biggest ketchup fan. He puts ketchup on every meal he eats. He was even invited to collaborate with Hunt’s on the brand’s best-ever ketchup. When commenting about that, Mahomes said he just hopes that they can find different ways of expanding his love of ketchup.

That is all there is to know about Patrick Mahomes diet plan. As you have seen, he tries as much as possible to eat foods that are good for his body and avoids foods that are not beneficial to his body.

Just like dieting, Pat also takes working out very seriously, although he rarely discloses the Patrick Mahomes workout plan. Mahomes is said to train not only during the season but also during the offseason. He’s been working with Bobby Stroupe, who is his personal trainer, since he was in the fourth grade. The two now have a relationship that is unbreakable.

When it comes to working out, Mahomes isn’t one to be all over the place. There are things he knows are important, and he makes sure to stick to them. For instance, Pat understands the importance of rest and sleep after working out. Good sleep is associated with better physical and mental health, and hence he makes sure to get plenty of it.

Bobby is the one who designs Mahomes workout regime. His main priority is to keep Pat healthy and resilient. He also helps him shed as much body fat as possible and gets him as sculpted as he is.

Due to the position he plays, Mahomes is known to concentrate more on his shoulders and arms when it comes to working out. This is because the 2019 MVP needs his arms and shoulders to be strong so that he can throw the football. Pat had this to say on his shoulder and arms training in an interview,

“Shoulder care is definitely something I’m doing more than I used to…My trainer, Bobby Stroupe, takes me through a routine where my shoulder is in awkward positions while gaining strength. I throw from so many awkward positions on the field, so it’s an important part of my routine.”

Mahomes also played baseball when he was younger. The quarterback said that baseball has had a significant impact on how he trains and his mentality. Baseball players are required to have strong arms. Since the position Mahomes plays requires the same, he has been able to steal some strategies from baseball and use them to improve his game.

However, that does not mean he only works on his arms and shoulders. If you are a fan of the NFL, then you should by now have noticed that the game is changing and quarterbacks are required to do more than just throw the football. There are times when they are required to run to escape tackles or just to make plays, and this requires their mobility to be at par with that of the rest of the players. As a result, Mahomes works on the mobility of his joints and hip flexors.

For Mahomes to improve on his movement and reaction, Bobby makes him do an eight-point leaping sequence. During this movement exercise, Pat has to jump in different directions. He follows this up with some stability, mobility and flexibility exercises to help him be more mobile, flexible and stable.

Mahomes also does a lot of resistance training. Patrick Mahomes’ strength-training workout program involves tossing up objects that weigh up to 20 pounds. He also does standard lifts. Pat is said to be able to deadlift more than 500 pounds which is nearly two and a half times his body weight.

In an interview, Patrick Mahomes was asked how a typical day in the gym looks for him, and he had this to say.

“I make sure to get in some foam rolling and time with the Hypervolt volt to warm up. I have to make sure my body is ready to work out. I do legs one day and arms the next and then keep switching back and forth. We also always do shoulder mobility workouts and throwing mobility exercises. It’s important that I always make sure my shoulder is the healthiest it can be.”

That is all there is to know about the Patrick Mahomes workout plan. As you have seen, he focuses on what is important to his game and ignores the rest.

The Patrick Mahomes diet and workout plan requires a lot of discipline and consistency. You have to be disciplined to keep away from all the sugar, fast food and unhealthy foods for the betterment of your career, and this is something Mahomes does. His workout plan requires consistency. It is not easy to train during the season and during the off-season when everyone else is enjoying their free time.

To be on top, you have to do things differently, and that is something Mahomes truly does. Mahomes does not waste time doing exercises and movements that do not benefit his game. All the exercises in his workout regime help improve his game in one way or the other. When his personal trainer is designing his workouts, he looks at his game videos and creates a workout program that puts him in positions he is likely to be put in while playing the game he loves. This helps him to get comfortable in such situations and find ways to overcome them and be better.

Patrick Mahomes’ champion-caliber workout and diet plan are key to the superstar’s success on the field. He invests a lot of time into training and preparing for the big games and his discipline has paid off, to say the least.

With that said, Mahomes regime is tailored for him and it gets him results. While anyone can follow his routine and make progress too, it’s also a good idea to use his training methods and workouts as a guide to design your own gridiron-inspired workout program based on your goals and experience level.