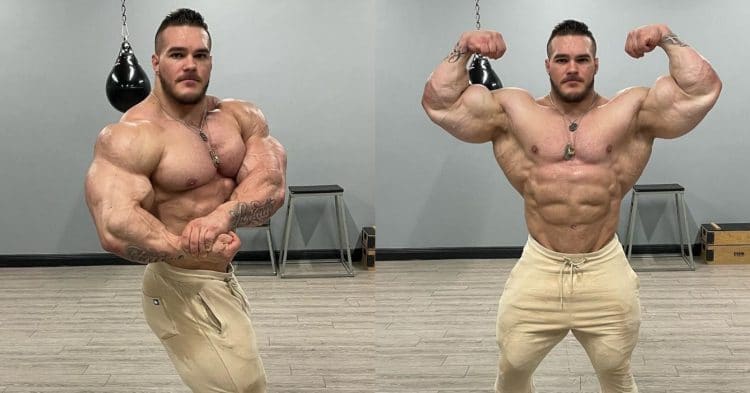 Coming off the back of one of the best rookie years in pro bodybuilding history, Nick Walker is currently hard at work during the offseason. His recent updates paint a picture of a man with nothing but utter focus.

Walker burst onto the pro bodybuilding scene by earning his pro card and making his debut late last year, but it was his efforts this year that got a ton of attention. Not only did he win the 2021 Arnold Classic and New York Pro, but then he scored an unprecedented fifth place in his first Olympia appearance.

Nick has made it clear after this busy year, that he will likely not be competing again until the 2022 Olympia, taking time to work hard and make improvements on his physique. If his recent posts to Instagram are any indication, he has been doing precisely that, looking absolutely massive in his recent physique updates.

This update from Nick Walker shows that he has been working hard to improve on his already impressive physique. He seems to be the only bodybuilder coming up the IFBB Pro League ranks with the mass to rival two-time champ Big Ramy, but he has been putting in the effort to work on his specific weak points.

One of his major knocks was on his legs, which is something he has particularly been trying to improve. He recently shared a video on YouTube where he went through an intense hamstring workout, consisting of the following exercises:

You can check out the whole video below, and see Walker putting in the work. Towards the end, he even shows off his leg pump, and it appears that he has made improvements on his hamstrings, even from the Olympia last month.

After the year that he had this year, it is impossible to deny that Nick Walker is going to be someone fans will be keeping a close eye on moving forward. If he is able to keep up this hard work in the gym, and make the gains that are needed to appease the judges, he is going to be a top contender at every contest he is in, for years to come.