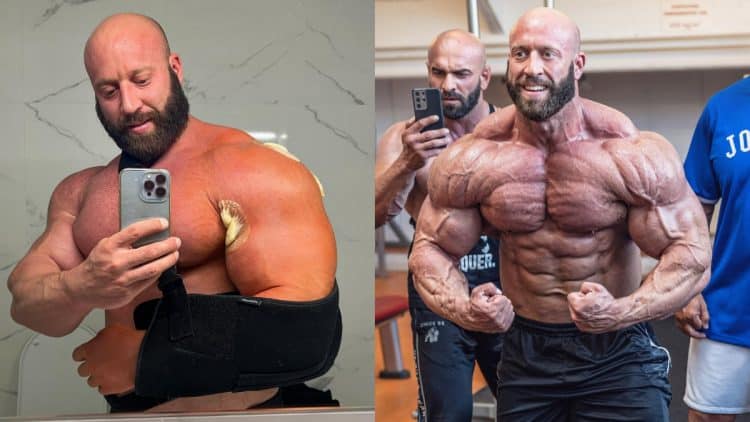 Bodybuilder Petar Klancir is one of the hottest rising stars in the Men’s Open division but has faced many road bumps in his journey. In a recent post uploaded on Instagram, Klancir shared that he will have a speedy recovery after getting surgery for a right bicep injury.

Petar Klancir gained popularity after making his way to the stages of the IFBB Pro League over the past few years. He showed potential in the Men’s Open division when he earned a 10th place finish at the 2017 San Marino Pro. Klancir boasts a humongous physique with an especially full chest and gigantic biceps. He also has an impressive grainy look that brings out the details of his muscles.

Although Klancir showed promising signs, he needed to work on his physique to match the mass monsters of the Men’s Open. While some focus on getting huge or getting ripped, Klancir brings an incredibly symmetric physique that combines the best of mass and aesthetics.

The 32-year-old Croatian bodybuilder is determined to improve and took some time off to pack on the pounds and bring a better package. Klancir’s return got delayed after he faced visa issues but managed to come back in May to compete at the 2022 California State Pro. He placed fifth at the contest.

On Aug. 4, Klancir announced that he would be calling an end to the 2022 season after suffering another major setback. He sustained an injury to his right bicep, which proved to be one of his greater challenges since starting in the sport.

In a recent post uploaded on his Instagram, Klancir told his following that he had successful surgery for the ruptured bicep tendon in his right arm and will make a quick recovery.

“First of all I would like to thank you for all the support, kind words and positive energy you gave me🙏Surgery was a success! Biceps tendon ruptured at the grip point so it was just screwed back to the position.

“I had the best @akromionhospital surgical team beside me, Prof. Čičak made an excellent work so I will have speedy recovery. In a few days I will be back on training ground focusing.”

Petar Klancir informed his 106K fans on the social media platform that he will be back to training in the gym in a few days and is looking forward to advancing his leg and ab development.

It looks like Klancir is in high spirits and excited to make his comeback soon. He had a tough 2022 bodybuilding season so far but has not lost his enthusiasm to compete. As of this writing, it’s unclear when he will compete next or how the quality of his next package will compare with his past looks.