The four-time Mr. Olympia says the Open class landscape is changing and new talent is starting to take over. 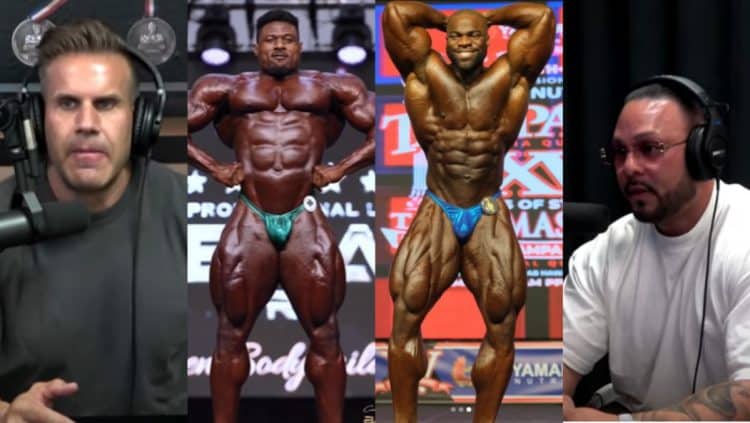 As one of the most visible ambassadors of the sport, Jay Cutler’s eye for talent is among the best. In a recent video, bodybuilder Mark Anthony and Cutler discuss the Men’s Open landscape as well as the bright futures ahead for Andrew Jacked and Quinton Eriya.

The IFBB’s Open class is brimming with talent and continues to prove itself as one of the most competitive bodybuilding divisions around. The category is home to some of the biggest and freakiest athletes, even though many believe aesthetics are making a comeback.

Earlier this month, Andrew Jacked emerged as an athlete to watch this season following his dominant 2022 Texas Pro victory. En route to winning the contest, Andrew defeated fifth place finisher Quinton Eriya, who many have dubbed as a legitimate threat in the Open class, including Mark Anthony.

Mark Anthony was the first ever Men’s Physique Olympia champion, a title he secured in 2013. At his next three Olympia performances (2014, 2016, 2017), he was unable to retrieve his lost title. He last competed at the 2017 Ferrigno Legacy Pro where he placed 13th before stepping away from the sport. Anthony recently joined bodybuilding legend Jay Cutler to discuss the future of the Men’s Open division.

During the video, Cutler asked about Andrew Jacked, and Anthony had the following to say:

“Andrew Jacked… dude he has it all,” Mark Anthony told Jay Cutler. “You know in the gym, he’s always covered up. He’s tall. Big structure, big frame. You can see what’s happening under the clothes but when I saw him in Texas.”

He acknowledged that Jacked ‘has it all,’ but said once Eriya has a little more time to fill out his frame, he’s going to be the best. Anthony added that many ‘seasoned’ people in the industry have told Eriya he has the potential to be Mr. Olympia.

“I was there to support me close friend Quinton Eriya. He’s personally my favorite bodybuilder today,” Anthony said. “He has the shape. He has the structure… he just got some baby muscle. He just needs a little time. I feel like this off-season he really made some really good improvements.”

“I feel like now he’s finally gaining his confidence. You have to believe in yourself that you can do these things. If other people are saying it, you know people that are very seasoned in this industry have told him, ‘listen dude, you can be the best, you can be Mr. Olympia.’ He just needs time to fill out his frame right Jay. Mark Anthony said.

“Yeah, I mean he was here and I told him this exact thing: you gotta be confident. Looking at some of his shots dude, he can stand right with the best but he just got a little bit of a gap to fill. I mean, another thing — he’s a little taller right,” Cutler said.

Cutler Looks at the ‘Changing’ Open Landscape: ‘The Younger Generation is Coming’

Cutler believes the Open class is on the precipice of big changes.

“There’s a lot of shows, a lot of good guys coming up but he had an outstanding showing. He just needs another year, like you said, he made great progress but you know, I think [Andrew] Jacked stole the whole show there. Martin Fitzwater looked good,” Cutler said.

The four-time Mr. Olympia believes the younger generation is slowly pushing out seasoned bodybuilders like Big Ramy, who plans to retire at 38, Brandon Curry, and William Bonac. In addition, Cutler highlighted the newly signed NPC bodybuilder Michal Krizo, who is preparing to earn his pro card at the 2022 Amateur Olympia Italy contest scheduled for next month.

“I’ve seen this [Michal] Krizo guy in person… he looks very impressive. I don’t know if you got to see him when he was at Dragon’s [Lair]. You know, the landscape is changing. We have a lot of guys that are on their way out.

Ramy is coming towards it. Brandon is getting there. Then, we’re seeing William Bonac, we’re seeing the Hunters, the Nick Walkers, these younger generation coming in and that includes Quinton also. Iain Valliere — he looks really good,” Cutler said.

Before ending the discussion, they circled back to Andrew Jacked.

“Andrew Jacked has everything. He has all the tools. All the body parts are there. When I interviewed him for NPC News online after, he said this was just 80 percent,” says Mark Anthony.

“Flex Wheeler really wanted him to do that show [2022 Texas Pro]. He had originally planned for the UK Arnold, and then he said, ‘hey jump in and you’re going to win this.’ Hell of a decision. Shout out to Flex Wheeler,” Cutler said.

This isn’t the first time Cutler praised Andrew Jacked’s potential. In a sit-down with coach Milos Sarcev, Jay compared Jacked’s back to reigning Mr. Olympia Big Ramy’s. Bodybuilding veteran Samir Bannout chimed in recently and believes Andrew would ‘automatically’ place in the top four at Mr. Olympia should he attempt the show.

While Cutler and Bannout have high hopes for Jacked and Krizo, Mark Anthony sees his close friend Quinton Eriya one day winning the Olympia title. Following the discussion, Jay Cutler emphasized that the Open class is changing with newer athletes like Jacked and Eriya making an impact on the division.