Looking for motivation for your next biceps workout? It doesn't get any better than this. 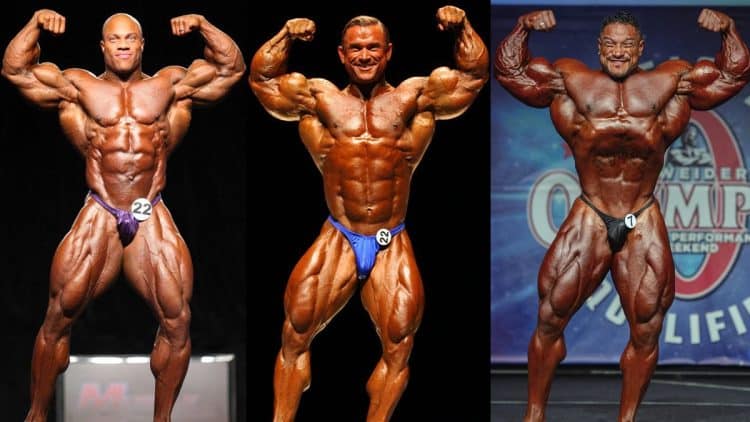 Man’s fascination with big biceps is well known. Although arm size doesn’t add to your functionality or strength after a point, it doesn’t hamper its popularity amongst gym bros.

Look around your gym and you’ll probably find people working on their guns like it’s the end of the world. Ask your buddy to flex their muscles and they will, in all likelihood, hit a front double biceps.

Big arms are considered symbols of strength and masculinity. Biceps with good peaks, thickness, definition, and separation can make you stand apart. Many bodybuilding legends like Arnold Schwarzenegger and Sergio Oliva are, to this day, acclaimed for their biceps development.

In this article, we go over the 12 bodybuilders with the biggest biceps in the world and a workout to help you grow your pythons.

12 Bodybuilders with the Biggest Biceps in the World

It’s no secret that steroid use is widespread in bodybuilding, especially at the highest level. Hence, this article includes bodybuilders that allegedly use gear. However, we have avoided including bodybuilders who have been accused of using site-enhancement oils like synthol. But why is that, you ask?

While gear can help a bodybuilder pack on size, they still require stringent training, diet, recovery program, and genetics. On the other hand, site-enhancement oils are directly injected into the target muscles. Synthol has no medical value and doesn’t improve muscle strength. Plus, excessive use of synthol can lead to muscle disformity. [1]

Disclaimer: Fitness Volt doesn’t endorse the use of drugs or site-enhancement oils. The list is for education purposes only.

Below are 12 bodybuilders that have the mountains for biceps:

You were probably expecting the eight-time Mr. Olympia champion “The King” to be on the list. Weren’t you?

In his off-season, Ronnie Coleman’s bis measured around 24-inch. However, he has previously disclosed that his arms were around 23 inches when he stepped on stage.

Besides having some of the biggest biceps in the pro bodybuilding circuit, Ronnie’s guns had unparalleled definition and separation. Plus, his long biceps head made his peaks resemble Mount Everest.

At the peak of his career, Phil Heath’s 23-inch biceps were second to none. Furthermore, his 17-inch forearms were bigger than many of his competitors’ biceps.

Nicknamed “The Gift” because of his insane genetics, Heath’s flawless physique blew his competition out of the water. His diced biceps and horseshoe triceps put him on our list of the biggest biceps in the world.

With seven titles under his belt, James “Flex” Lewis is the winningest 212 Olympia champ. In his heydays, Lewis had 22-inch biceps, which looked humongous on his five-foot-five frame.

The recently retired bodybuilder is known for his incredible symmetry and round and full muscle bellies. His fans will surely miss seeing him with the big boys on the Men’s Open division stage at the Olympia.

Rich Piana was a freak of nature. On second thought, it would not be correct to call him a freak of “nature.” If anything, Piana was hell-bent on challenging nature and molding it to his liking, which he indeed was successful in accomplishing.

Piana loved training arms and his pythons measured a mind-boggling 24 inches. Watch his training videos, and you’ll want to employ all his training techniques in your next biceps workout.

Kai Greene undoubtedly had one of the best biceps peaks in the business. In his prime, Greene’s biceps were 22 inches and had peaks that eclipsed his competition.

A few scrolls on his Instagram profile tell you that Greene loves training and showing off his arms. Although he has never won a Sandow, bodybuilding fans consider him one of the greatest bodybuilders of all time.

Thanks to his 24 inches, Roelly Winklaar earns a spot on the biggest biceps in the world list. His biceps are humongous, and the separation and lines on his arms also make him a threat to his competition.

Besides his biceps, Winklaar has some of the best triceps in the sport of bodybuilding. Per Winklaar, his biceps don’t grow nearly as quickly as his triceps.

In his prime, Priest had some of the best biceps in the business. The five-foot-four bodybuilder’s 22-inch guns made him stand out. Furthermore, his forearm size and conditioning added to his overall physique aesthetics.

Priest is one of the most outspoken bodybuilders and doesn’t shy away from sharing his opinion about the developments in the sport on social media.

Although Bill Pettis is not a big name in bodybuilding, he competed with the likes of Arnold Schwarzenegger, Lou Ferrigno, and Franco Columbu. Per Joe Weider, Pettis’ arms measured a monster 23.25 inches, even overshadowing The Austrian Oak’s 22-inch and Ferrigno’s 23-inch pythons.

After his pro bodybuilding career came to an end, Pettis became homeless and was found dead near a creek in Pennsylvania at the age of 69. He was allegedly an alcoholic and suffered from mental health issues.

“The Sultan of Symmetry” is often referred to as one of the uncrowned Mr. Olympias. His 24-inch pythons and flowing physique made him a frontrunner for the prestigious Mr. O title.

In 1999, Flex Wheeler discovered that he had focal segmental glomerulosclerosis, a form of kidney disease. The bodybuilding legend had to undergo a partial leg amputation in October 2019 due to his medical condition.

At six-foot-four and a contest weight of 330 pounds, Kovacs was one of the biggest bodybuilders of all time. He made his competitors look like rookies on stage.

The Canadian bodybuilder had 25-inch arms. Furthermore, his arms reportedly measured over 27 inches in the prime of his career. However, per experts, his guns lacked conditioning and separation.

Mike “Big Guns” Matarazzo wowed audiences with his enormous 23-inch arms. Matarazzo’s competitive bodybuilding came to an abrupt end when he had to undergo triple bypass surgery at only 38 years old.

Besides his insane arm development, Matarazzo was known for his chiseled calves and showmanship on stage.

At the peak of his bodybuilding career, Markus Rühl was a mass monster in his own right. The German bodybuilder boasted 24-inch biceps, which had good peaks and separation. Besides his ginormous arms, Rühl is credited with having some of the best shoulders in the business.

Although not a bodybuilder, Manfred Hoeberl deserves a place on this list due to his ginormous arms. Measured 25.75 inches un-pumped and 26 inches pumped at the 1994 Arnold Sports Festival, the elite strongman competitor had the biggest arms of any strength sports athlete in the 1990s.

Furthermore, he was the first man in history at that point to have an arm measurement that was thrice the circumference of his wrist. The six-foot-three Austrian was a two-time Europe’s Strongest Man winner and a runner-up at the 1994 World’s Strongest Man contest.

Being a powerlifter and strongman, Hoeberl is arguably the most functional athlete on the biggest biceps in the world list. His PRs included a 628-pound raw bench press, 794-pound raw squat, and an 860-pound deadlift.

Notably, many experts speculated that Hoeberl used synthol in his arms. However, the powerlifter dismissed such claims.

How to Build Bigger Biceps?

Now that you’ve witnessed the biggest biceps in the bodybuilding world, you’re probably wondering how you could turn your twigs into tea trunks.

Let us take the guesswork out of the equation. Given below is eight-time Mr. Olympia Ronnie Coleman’s biceps training routine that will help you pack on serious mass on your upper arms:

Learn more about the bicep exercises and step up your biceps training even more. Check out the following articles.

Who has the biggest biceps in the world?

Which natural pro bodybuilder has the biggest biceps in the world?

Doug Miller is a natural bodybuilder whose arms measure 20 inches. The two-time IFPA world champion has a great shape, symmetry, and conditioning in his biceps and triceps.

Who has the strongest biceps in the world?

Building sleeve-ripping pythons are easier said than done. If adding muscle mass to your upper arms was so easy, everyone would be walking around with 24-inch guns.

However, don’t use this as an excuse to give up your gym membership. Add the biceps workout listed above to your training regimen and watch your arms take a life of their own.

Looking for something to read next? Check out the Top 18 girls with the biggest biceps in the world.

Rows and pull-ups getting a little redundant? If so, the London Bridge should definitely be on your radar. A powerful...