Ahead of the 2020 Mr. Olympia, Phil Heath and Brandon Curry have tense face to face encounter at the athlete meeting 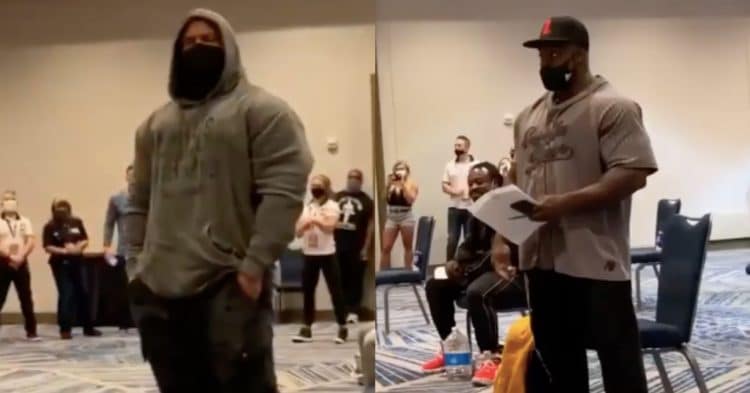 Heading into the 2020 Mr. Olympia, all eyes are on Brandon Curry and Phil Heath to see who will win this year’s contest. These two champions came face to face for the first time ahead of the contest, and you could cut the tension with a knife.

Although there are a lot of really big names competing at the Olympia, the general consensus is that the Men’s Open division will come down to either Heath or Curry as the winner. Between Brandon’s impressive victory at the 2019 Olympia, and Phil’s return to competition after a long hiatus, all signs are pointing to a victory for one of these two men. They know it too, as they have each been asked about the other in interviews, leading up to the contest. They both seem to be focused on themselves, and not thinking too much about the other people competing.

However Brandon Curry and Phil Heath were left with no choice but to think about each other recently, as they touched down in Florida ahead of the Olympia. When the two bodybuilding champions arrived for the athlete check-in before the events of the weekend kick off. Here, they came face to face for the first time ahead of the show, as each athlete was announced and introduced individually. The intense exchange was captured on video by Antoine Vaillant, and posted to his Instagram Stories.

The tension in the room is palpable, as Heath avoids looking at Curry and Brandon just stares him down. It is hard to tell where either man is, in terms of their physiques, but they seem dialed in ahead of the contest. This exchange, or lack thereof, is enough to get anyone hyped up to see them go head-to-head on the stage.

Phil Heath and Brandon Curry are not the only former champs that are competing this weekend. Longtime veteran and 2008 champ Dexter Jackson is making his final walk this weekend, as he plans to retire after the 2020 Mr. Olympia. When he was introduced, it was clear that everyone there has the utmost respect for him, as they all cheered him on strongly. Video of this was captured by Dennis James, who has been working with Big Ramy in his final stages of prep for the contest.

There are a lot of things about the 2020 Mr. Olympia that are worth looking forward to. The most exciting thing is easily the rivalry between Phil Heath and Brandon Curry. It will be awesome to see them on stage together and see who will walk away with the Sandow.