Phil Heath Shows Off Massive Arms In The Gym 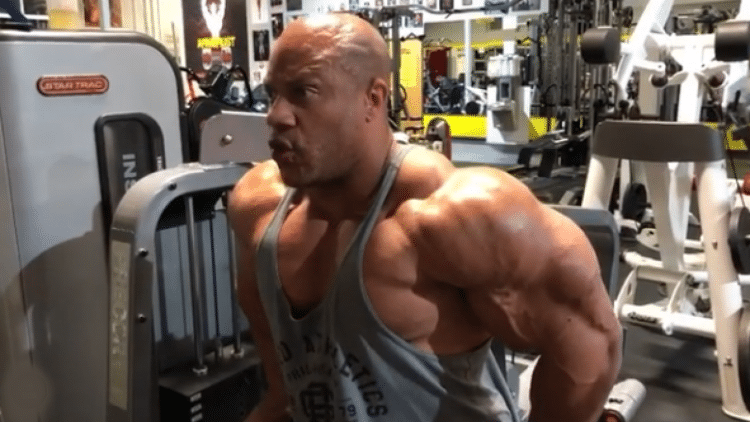 Phil Heath has made it clear that he is getting back to competing in 2020. Subsequently he is looking to make sure he is ready, by doing some big lifts in the gym.

Heath took 2019 off from bodybuilding competition, but never took time away from the gym. He showed how incredible his arms are at a dinner with Dexter Jackson. In addition to that, he also got some training in with Dwayne “The Rock” Johnson, further improving his arm size. On the other hand, he also is getting work in on his abs too, making sure he stays well rounded.

Heath showed how great he looks again, with a recent gym update. He posted two videos to his Instagram, showing off the work he is putting in. In the post, he said that he had taken three days off from the gym, but that he was glad to be back to training.

Check out the videos:

Looking at these videos, it is clear that Phil Heath still has a lot to give. He won the Mr. Olympia seven times, all the way up until 2018, where he lost the title to Shawn Rhoden. As a result, when Rhoden was unable to compete in 2019, there was thoughts that Heath would decide to compete. Nevertheless, he maintained his decision to stay on the sidelines for the year.

It will be interesting to see how Heath looks, when he decides to take the stage again. With a physique like this, it seems likely that he would best most of the competitors who took to the Olympia. Therefore, it will be exciting to see him go toe-to-toe with the likes of Brandon Curry, and Shawn Rhdoen.

Phil Heath has clearly been working hard each and every time he hits the gym. Fans from around the world are watching and waiting for his return to competition.