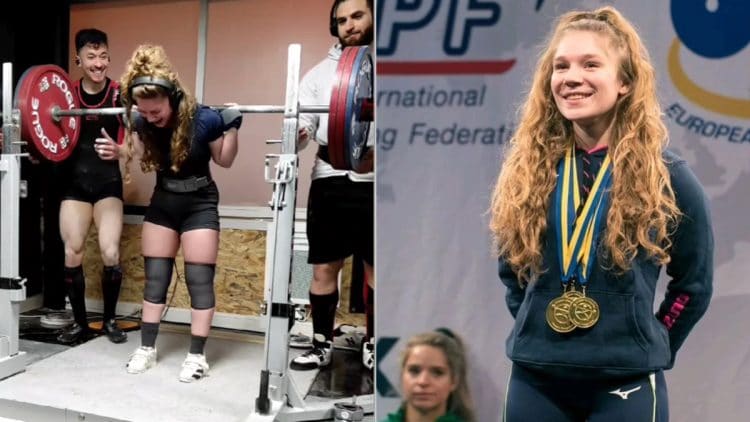 One of the fastest rising competitors in powerlifting, Tiffany Chapon continues to elevate her game with consistent lifts that have many fans wondering how it’s possible. Recently, the French powerlifter shattered her world record unofficially after raw squatting 160 kilograms (352.7 pounds) raw.

Tiffany competes in the 47kg weight class which makes her squat all the more impressive given that she was lifting nearly three times her bodyweight. Setting the initial world record at the 2021 EPF European Classic Powerlifting Championships, the young prodigy put forth a jaw-dropping squat amounting to 153kg (337.3 pounds) that saw her reach gold.

This isn’t the first time the all-time world record holder wowed an audience on Instagram with impressive performances. Despite healing from a battle with COVID-19, Tiffany still posted a 410 kg (903.9 lbs) total (squat, bench, deadlift) from a training session back in late Jan.

Tiffany Chapon Continues to Raise the Bar in Training

Chapon accomplished her raw 160kg squat with a lifting belt, knee sleeves, and wrist wraps. Ready to shake up more IPF world records, Tiffany was seen on her Instagram page on Feb. 21, 2022, sharing a video of her dominating an unofficial squat record of 160kg (352.7lbs).

Compared to other lifters, Tiffany implements a narrow grip. In addition, the powerlifter uses a narrow stance under the barbell. Though, it’s clear that Tiffany’s compact approach to heavier squats certainly works for her. While she endured a grind during the ascent, Chapon showed off increased mobility when her butt nearly touched her heels at the bottom of the mat during the descent.

While Chapon hasn’t mentioned when she will officially compete again, it’s evident that she’s been training to make sure she has another dominant year in the sport as she did in 2021. Her squat is just one kilogram lighter than the heaviest squat ever recorded in the next weight class up, (52KG).

Tiffany Chapon continues to make improvements to her technique and overall strength. Having already matched the current squat world record in 47KG training, the potential of her smashing the all-time world record in competition remains sky-high for 2022.