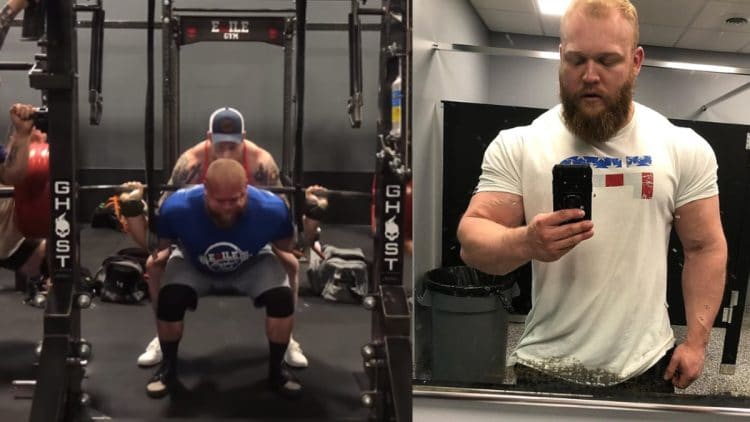 Squatting over 800 pounds is nothing new for Phillip Herndon. However, he usually performs the lift of these proportions with knee wraps. That was not the case in his most recent training session from May 30, 2022, as Herndon crushed an incredible raw squat session. He shared his top single on Instagram, and it just turned out to be his new raw squat PR of 825 pounds (375 kilograms).

Phillip Herndon’s new PR is considered raw by powerlifting standards because he used a lifting belt, wrist wraps, and knee sleeves. Herndon already holds the All-Time World Record Squat W/Wraps in the 110-kilogram weight class. However, he is now coming within a comfortable reach of the All-Time Raw Squat World Record, as his new PR was 35 pounds lighter than the official heaviest in the 110-kg weight class. Kevin Oak currently holds the record, as he squatted 859.8 pounds (390 kilograms) at the 2020 WRPF Hybrid Showdown II.

Phillip Herndon is preparing for one of the biggest powerlifting meets on the East Coast, which is the 2022 WRPF American Pro. It will take place July 29-30, in Manassas, VA, so Herndon has enough time to make up the 40 pounds and break the World Records.

Phillip Herndon mostly competes in the Raw With Wraps division, as he only had one raw performance in the last four years. That was at the 2021 USPA Pennsylvania State Championship, where Herndon set a competition raw squat PR of 350 kilograms (771.6 pounds). Just one year has passed since then,  and Phillip is squatting significantly more in training.

Despite being only 26-years-old, Phillip Herndon has already accumulated 35 sanctioned competitions. In addition, he has placed first in 23 of them, and he is just now growing into his prime years. He began his career in local Junior competitions, and is now competing at the highest stage. Phillip Herndon also claimed the squat World Record at the 2022 USPC Mid-Atlantic Classic, having lifted 435 kilograms (959 pounds).

Phillip Herndon is undoubtedly on his way to becoming one of the greatest pound-for-pound powerlifters ever. His lifts never cease to amaze anyone who witnesses them, but he is now also focusing a lot on the other events. So his next performance could be one for the history books.