Pull-Ups Vs. Chin-Ups – Which One is Right for You?

Pull-ups and chin-ups are two of the best back building exercises around. But, is one better than the other, and which one should you do? In this article, we explore the differences between these two moves so you can choose the right one for your needs. 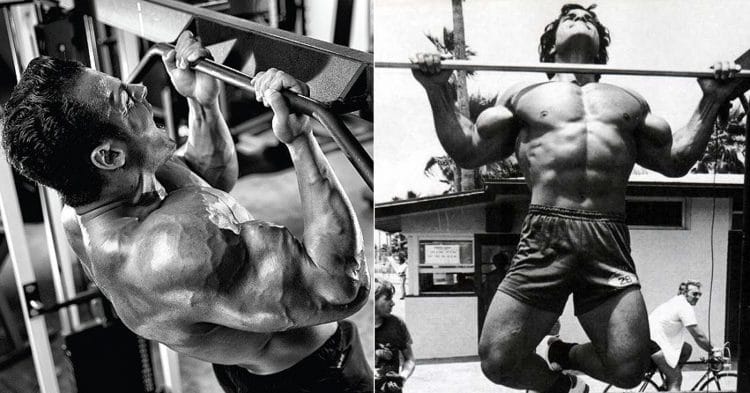 Pull-ups and chin-ups are compound exercises. That means they involve multiple joints and muscles working together. To a lot of people, these two bodyweight exercises seem like they’re interchangeable. After all, they look quite similar. But, in reality, they’re different enough that they should be considered separately.

But is one better than the other, and if so, which one should you choose? Let’s investigate!

How to do pull-ups and chin-ups

Before we deep dive into the differences between these exercises, let’s make sure you know how to do them properly. That way, you’ll be able to enjoy all their benefits while keeping your risk of injury to a minimum.

You can make both pull-ups and chin-ups harder by wearing a weighted vest or using a pull up/dip belt. 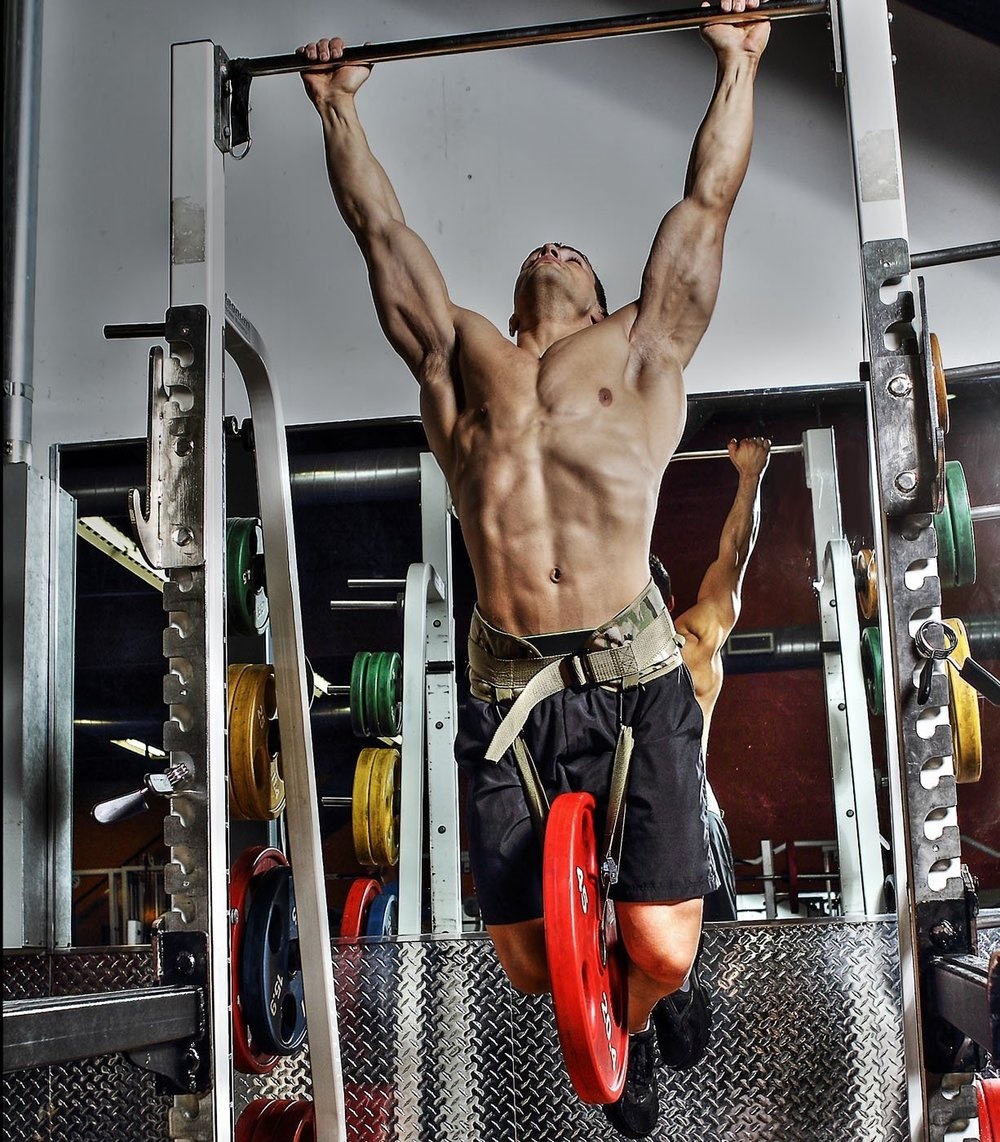 Make these exercises easier by looping a resistance band over the bar and under your legs, using it to provide some extra thrust.

Avoid doing pull-ups behind the neck. This puts a lot of extra stress on your shoulders and could lead to injury while offering no advantages over the safer, regular version.

The most obvious difference between pull-ups and chin-ups is the position of your hands. In fact, it’s your hand position that determines if you are doing pull-ups or chin-ups.

Pull-ups use an overhand or pronated grip. That means your hands face away from you. Typically, pull-ups are done with the hands slightly wider than shoulder-width apart. However, some bodybuilders do them with a very wide grip, which makes this already demanding exercise even harder.

Chin-ups are done with an underhand or supinated grip. The hands are normally about shoulder-width apart, although some people prefer to put their hands a little closer together.

There are other grip variations you can use, including a mixed grip, but the only one really worth mentioning is a neutral grip. With this hand position, your hands face inward in what is also known as a semi-supinated or parallel grip.

Is this a pull-up or chin-up? That’s up for debate, but, as the arm action is most similar to chin-ups, this variation is probably best called a neutral grip chin-up.

Pull-ups and chin-ups are both vertical pulling exercises. Lat pulldowns fall into the same category. But, because of the difference in hand position, these exercises involve different joint movements.

With pull-ups, the main joint action is shoulder adduction. This means your humerus (upper arm) is drawn into the side of your body. This makes pull-ups a frontal plane exercise.

Shoulder adduction and extension both involve the latissimus dorsi muscle. Known as the lats for short, this is the muscle on the side of your upper back. When well-developed, the lats look like wings and give your upper back its width. Good lats give you a V-shaped torso that can also make your waist look narrower.

Pull-ups and chin-ups also involve elbow flexion. This means, as well as your lats, they work your biceps too. Because chin-ups involve a supinated grip, your biceps are in a better position to pull than in the pronated pull-up. This means that, for biceps growth, chin-ups are arguably the better exercise.

While these opinions do make a certain amount of sense, the truth is that pull-ups and chin-ups work the lats to a very similar degree. In fact, according to studies, there really isn’t much difference between pull-ups and chin-ups for lat activation (1). Despite involving different movements, both of these exercises can help strengthen and build your lats, and there isn’t much difference between them.

However, those same studies revealed that there is more biceps activation in chin-ups than in pull-ups. This may help explain why some people feel that pull-ups are a more effective lat exercise; they simply feel their lats working more because their biceps aren’t contracting as hard.

That biceps data is important and helps explain why most people find chin-ups a little harder than pull-ups. During chin-ups, using a supinated grip, the biceps are in a stronger position. Overhand pull-ups place the biceps in a mechanically disadvantageous position.

This makes sense when you think about these two arm actions during isolation exercises. The elbow movement during chin-ups is a lot like barbell biceps curls. In contrast, pull-ups are more like reverse barbell curls. Anyone who has ever done these exercises knows that they can lift more weight or do more reps with underhand biceps curls than overhand reverse curls.

Pull-ups and chin-ups, when done correctly, are both very safe exercises. Providing you warm up properly before doing them, they are no riskier than lat pulldowns or any other back exercise. In fact, because they don’t lock you into a fixed pattern of movement like machines can, pull-ups and chin-ups might even be safer than many other back exercises.

That said, because of the different hand positions, there may be differences in comfort and safety that means one exercise is better for you than the other. 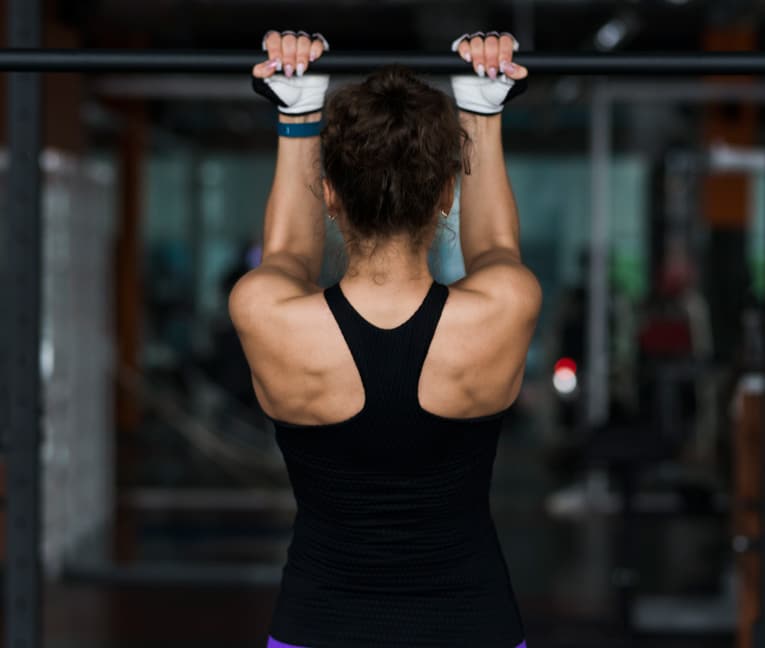 Pull-ups, especially when done with very wide hand placement, can be hard on your shoulders. To do pull-ups, you must put your shoulders into an internally rotated position, and that can be a cause of shoulder pain. Also, the wider you place your hands, the more stress there is on your shoulder joint. Because of this, very wide grip pull-ups are not recommended.

Overhand pull-ups can also be hard on the elbows, especially the lateral or outside part. Pain in this area is often called tennis elbow.

Wrapping up: Pull-ups vs. chin-ups – which one is best?

Ultimately, both pull-ups and chin-ups can help you build the back of your dreams. They both work your lats equally well and also involve your biceps too, although chin-ups are a little more biceps-centric.

Pull-ups and chin-ups both have benefits and drawbacks, most of which depend on your personal mobility and flexibility, and your injury history. Some people find pull-ups more comfortable, while others prefer chin-ups.

And that’s really how to determine which one is best – it’s the one you can do the best with the least discomfort. If you find that one causes a new or aggravates an old injury, you should do the other one.

But, if you can do both, then you should include both in your workouts. This will give you more of the variety you need to avoid training ruts and keep making progress. You could do pull-ups followed by chin-ups in the same workout, alternate between them both week by week, or do each one for a month at a time.

In the battle between pull-ups and chin-ups, there is no clear winner, so do the one you like the best or, better still, do them both to enjoy all of the benefits these superb exercises can offer.

How To Do The Cable Overhead Triceps Extension w/ Rope

The Navy SEALs are one of the world’s most respected special forces. Just getting into SEAL basic training is a...

Being able to do pull-ups is every beginner’s dream whether they accept it or not. Pull-ups are considered as an...

It’s hard to believe that CrossFit has been around for over 20 years. In the last two decades, CrossFit has...

Pull-ups, and their close relative chin-ups, are great for building a bigger back and stronger arms. But, after a few...