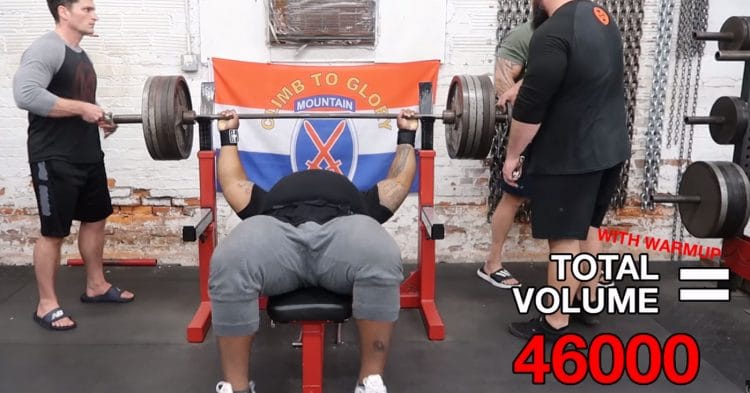 If there’s ever a Mount Rushmore for the world’s elite strength athletes, you best believe Julius Maddox will be on there! The Kentucky native blew away all expectations when he effortlessly broke the all-time raw bench press world record in August of last year with 739.6 lbs.

So as if that wasn’t heavy enough, he continued to set the bar higher and higher (pun obviously intended). In March of this year, he achieved a 350kg/770 lbs bench press which currently stands as the heaviest in history. And as hard as it is to fathom, there was only one direction to go from there, and that was up. He attempted but failed a 790 lb bench press a few months later.

But then 33-year-old Maddox decided that he wanted to be a demi-god and go for an 800 lb bench press as part of the Beasts of The Bench event earlier this year. Well, he darn near could have gotten it, however, the bar was misloaded and he ended up suffering an injury as a result… and he was pissed (but who wouldn’t be).

But Maddox is on a mission and that was only a roadblock in his journey to 800 lbs.

He was in Columbus Ohio recently where he joined up with world champion powerlifter Matt Wenning for a ridiculous bench press session where he did 500 lbs for 50 reps. And no, it wasn’t all at once because that’d be impossible, even for him. The workout consisted of 10 sets x 5 reps and the total volume for this session was a whopping 46,000 pounds (including the warmups).

And what’s just as crazy… he says it took only an hour and twenty/thirty minutes to complete.

So he started with some light dumbbell presses (35 lbs/15 kg per dumbbell), reverse-grip pulldowns, and triceps pushdowns to get himself warmup up for the heavy pressing. Maddox explained in the video that he has been suffering from inflammation in his elbows.

But this type of warmup and exercise sequence was exactly what he needed to be able to complete the session without experiencing pain, discomfort, and decreased performance. Wenning provided a very good explanation of how the warmup strategy would be very beneficial for Maddox.

For example, pure bench press athletes like Maddox are always using the basic pronated bench grip. But the body is meant to move in different positions and angles. So using a reverse grip on pulldowns allowed him to loosen up much better. Not to mention, the 35 lb dumbbell presses were all he needed to condition the muscles and joints but not fatigue himself, which was hindering his ability to train how he wanted to.

“The key is to warm up, not destroy,” said Wenning.

So they got into the workout and provided the total volume in pounds throughout the session. After the workout, Maddox ended by explaining a little about his current strategy.

“For those of you who don’t know, we have dialed everything down as far as intensity wise, which is weight, just so we can rebuild a stronger foundation.”

He then mentioned a few areas that he’s working to improve and that was a wrap for his ginormous bench press workout session.