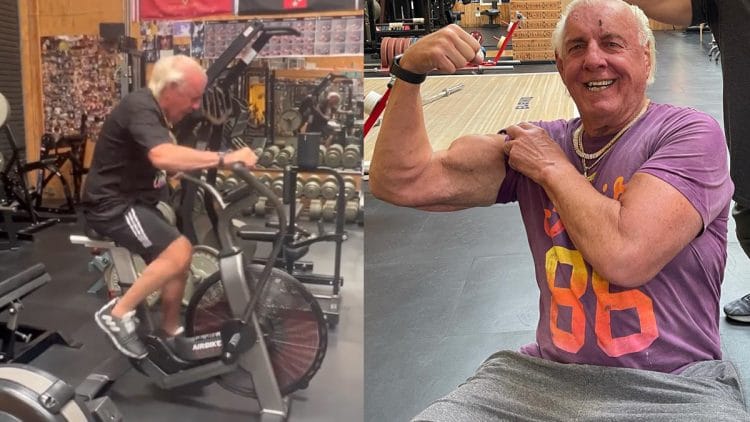 Spanning a career that’s lasted almost fifty years, Ric Flair is regarded as one of the best wrestlers of all time. In a recent post made on Twitter, the 73-year-old can be seen smashing through a series of workouts in preparation for his final wrestling show scheduled for July.

Known for his incredible tenure with World Championship Wrestling (WCW), Flair spent much of his career contending for titles with a number of prominent wrestling organizations. In the WWE, he managed to amass a staggering 16 titles and was the company’s first heavyweight champion. He was considered a major pay-per-view attraction during his time competing professionally in the sport.

Arguably one of the most famous wrestlers in the world, Flair’s time in the limelight has not been without chaos. Back in 2017, the iconic legend broke a finger during an altercation with a fan at Game two of the NBA Finals. Despite the minor injury, Flair remained in good spirits after posting his mangled hand online.

As a result of his successful career, Flair remains the only wrestler to be inducted into the WCW’s Hall of Fame on two occasions. Enjoying his twilight years, the credentialed wrestler provided his massive fanbase with a dose of motivation, courtesy of a grueling workout he posted on social media.

In a recent post published on Twitter, the charismatic icon offered a lesson in motivation by sharing one of his workout routines.

“Success Is The Sum Of Small Efforts Repeated Day In And Day Out! WOOOOO!” Ric Flair posted.

Success Is The Sum Of Small Efforts Repeated Day In And Day Out! WOOOOO! pic.twitter.com/9ThR7qDTne

Flair practiced four different exercises. First, he started with seated T-bar cable rows. For his second movement, the Pro wrestler utilized the elliptical cycle, pushing the pace, and proving that even in his later years, he still has plenty of gas in the tank. Then, in what was perhaps the most straining exercise, Flair moved on to sled pushes with minimal weight. Before ending the routine, Flair got a good burn in by hitting a Battle Rope Finisher.

The ‘Nature Boy’ ran into health complications at 70 years old. Specifically, Flair underwent heart surgery in May 2019. After the scary ordeal compromised his health, Flair said that he will no longer take life for granted, adding that he would be back to his usual self, ‘wooing’ in no time.

With intentions of completing one last wrestling rodeo, the 73-year-old is clearly putting in the work and doesn’t plan to slow down. As of this writing, Flair intends to perform at his last show this July, but no opponent or potential match-up has been announced.