Reigning 212 Olympia champion Derek Lunsford shows how he maintains his massive build in the off-season with a comprehensive breakdown of the six meals he eats throughout the day. 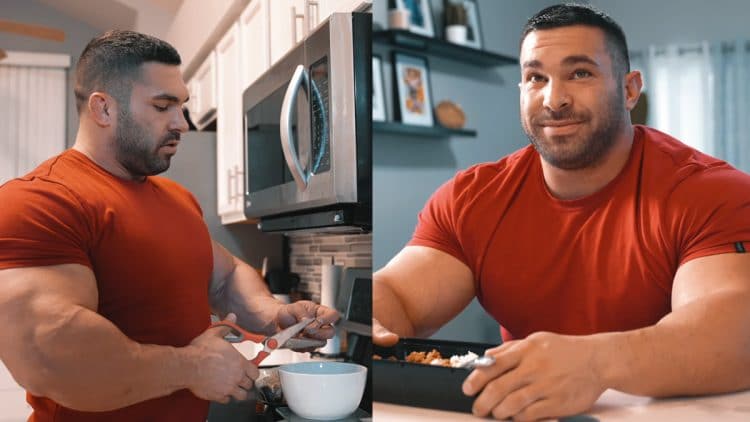 212 Olympia champion Derek Lunsford is one of the hottest names on the calendar this bodybuilding season. In a recent video shared on YouTube, Lunsford provided fans with a full day of eating in preparation for 2022 Olympia.

As a 212 Men’s Bodybuilder, Lunsford is making a name in the sport at a rapid pace with impressive muscularity and a fierce commitment to his craft. In 2017, Lunsford took his physique to 212 Olympia, securing fifth place in his debut. He learned from his mistakes, entered the 2018 Olympia a year later in the 212 division, and walked away from the show in second place to seven-time champion Flex Lewis. Lunsford took the next year to prepare his physique for yet another Olympia competition.

When 2019 rolled around, Lunsford’s consistency in the sport saw him reach the Olympia podium, and once again landed in second, but this time to champion, Kamal Elgargni. The following year in 2020, the 29-year-old made it to the O stage only to fall back to fourth place. Despite the obstacles, Lunsford finally reached the pinnacle of the sport at 2021 Olympia, earning his first 212 crown.

Ahead of his next performance, Lunsford walked his fans through an average day of eating, as his off-season efforts start to pick up. Below you can find Lunsford’s full day of eating, which consists of six meals.

Meal One 50 grams of Protein, 60 grams of Carbohydrates

At each and every meal, Lunsford’s goal is 50 grams of protein and 75 grams of carbohydrates.

For what many consider the most important meal of the day, Lunsford’s breakfast consists of egg whites, mushrooms, steak, and potatoes.

“We’re going to make egg whites, with mushrooms and three ounces of Icon Meals streak. About 200 grams of egg whites, and I’m going to cut up some potatoes for him and air fry it.” Lunsford’s partner says.

After his first meal, Lunsford opts to take some supplements. Specifically, he takes two scoops of Evogen products, Evolog and Evovite. He likes to consume these supplements two to three times a day as well as a one to two probiotics. Lunsford insists that consuming all of these supplements with a meal will prevent nausea, versus taking the supplements on an empty stomach.

“I love to use this one about three or four times per day.”

After hitting a cardio session, Lunsford finishes his first meal of the day.

“I feel good, I feel healthy. I feel like I want to go do stuff.” Lunsford says.

“Normally I do about six ounces of rice, but we are going to do eight ounces. So, my carbs got pumped up a little bit this week, I was doing 200 grams of carbs a day, moved to about 300 [grams] and then 400 grams of carbs.”

Lunsford explained that he likes to consume food with consistently sized bites.

“Truthfully, some people are like ‘I want to make sure it tastes good so I can follow a diet.’ To me, if it tastes good, I want to eat more of it. So, if I’m dieting, and I’m hungry, even after I eat a meal, then I want to make it taste not bland but not as good as it could be, so that way I’m not craving it every day.”

After mentioning that he doesn’t have a favorite meal, Lunsford moves on to his third course of the day.

Lunsford starts his third meal with a pre-workout shake and added cream of rice. He uses the chocolate Evogen as his base protein powder.

“Meal number three, I’m doing almond milk. Normally, I would do water, tastes great actually but we have almond milk. It tastes like the last little bit of milk from your cereal when you eat cinnamon toast crunch, that’s exactly what this tastes like.”

“The only time I do protein shakes is post-workout, and sometimes I’ll have a second shake in the day, but I like to eat whole food. Chicken, beef, salmon, whatever.”

After taking a late nap, the former 212 Olympia winner starts meal four and clarifies that he still has cheat meals.

“Eight ounces of ground chicken, she made it, ground it up and cooked it. It’s taco seasoning and we have rice to go along with it. This looks to me about eight or nine ounces of rice, like earlier.”

“Today, I’m not training, I’m resting. So, I’ll eat five meals for sure and late tonight I’ll eat a sixth meal. I do have cheat meals sometimes, like twice a week I’m having cheat meals. Last night, we had sushi, typically, I’ll have either Sushi or burgers or Persian food, something like that.” 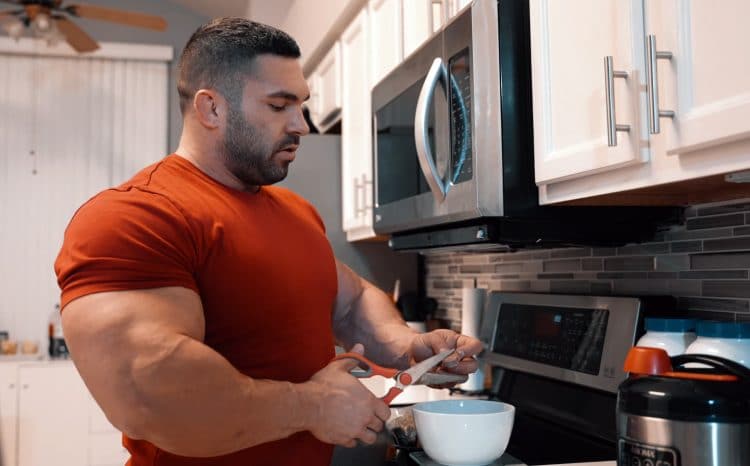 Lunsford starts meal five by cutting up some steak to prepare with white rice. According to the decorated bodybuilder, eating red meat is a must at least once a day during the off-season.

“It’s quick and easy. I like this meal. Steak and rice, it’s a staple. I think you need to eat at least one red meat meal a day in the off-season, maybe two. I wouldn’t eat too too much but one to two meals a day is good. You’ll probably notice your strength goes up, volume will increase, so this is important to get at least a little red meat into your diet consistently.”

Lunsford opts for another shake made with almond milk and supplements, made with two scoops of Evogen Isoject.

“That’s it guys. A full day of eating. We did two whole food meals for meals one and two. Did a shake for the third meal. Did the same, did two more whole food meals and a shake before bed. So, that’s it. Nothing really special. That’s what I do.”

The 212 bodybuilder chose to consume less carbohydrates for his final meal of the day.

Even on the sidelines, Lunsford is still maintaining a high profile at bodybuilding events. After reigning Mr. Olympia Mamdouh ‘Big Ramy’ Elssbiay was absent for a guest posing appearance at the 2022 Pittsburgh Pro, Lunsford replaced him and stole the show alongside 2021 Arnold Classic champion Nick Walker.

Without a doubt, Lunsford’s commitment to bodybuilding is serving him well in the off-season. The demands of a professional bodybuilder are hard to maintain, but Lunsford is approaching his everyday diet in a calculated manner, with his eyes locked on to bodybuilding’s most prized stage.

Skinny Forearms? Build Your Lower Arms with These 13 Exercises and Workout!