Learn How To Do The Kettlebell Seesaw Press 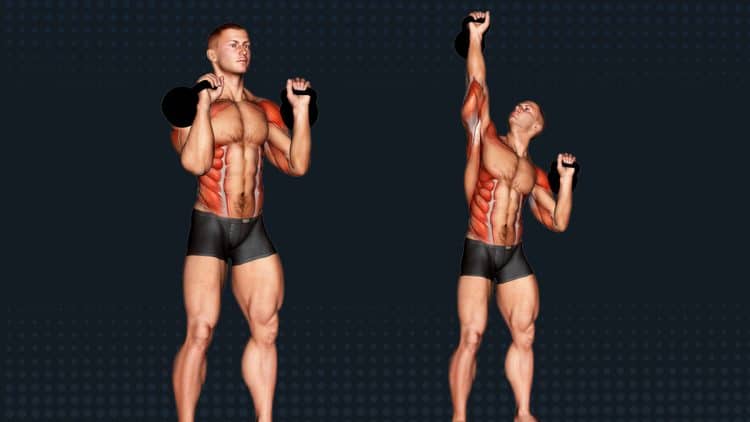 The kettlebell seesaw press is a version of the alternating kettlebell overhead press. It has carryover to other exercises and there are also many variations of this movement. It’s not the simplest exercise to perform as you should know how to double clean kettlebells and then alternate pressing the weights overhead but with enough practice, we think it can be beneficial for everyone.

Learn about what muscles are involved, how to do it for best gains, benefits, variations, and how to include it in your training regime.

This is a kettlebell alternating press variation that we think is one of the best exercises you can do for the upper body. In this guide, you’ll learn about what muscles it works, how to do it, benefits, variations, and how to include it in your workouts.

How To Do The Kettlebell Seesaw Press

Before you perform the kettlebell seesaw press, you should know how to double clean kettlebells. This is the portion of the lift where you lift the kettlebells off the ground and into the front rack position before you do the alternating press.

It involves swinging the kettlebells between the legs and then lifting them into place.

If you do not know how to kettlebell double clean, we highly recommend you watch this video.

Here are step-by-step instructions for the kettlebell seesaw press.

Placing the kettlebells back on the ground.

This part of the lift may be just as important because many hurt themselves attempting to set the kettlebells back down. That’s why it’s recommended to have some experience doing exercises that involve using two kettlebells at the same time.

Here’s a great video tutorial that we recommend you take a few minutes to watch if you want to perfect this movement and be as efficient as possible. Although, you can just follow the written instructions if you have more training experience and a proper understanding of how to perform similar movements.

Let’s discuss some of the reasons you should do the kettlebell seesaw press.

Kettlebell training is not just for functional fitness. You can still build tons of strength and muscle using this unique training implement as long as you’re progressing with the weight and reps.

Kettlebell presses are also great because you have to stabilize the weight which also improves stability in the shoulder joint. As you probably know, the shoulders are a ball and socket joint prone to injuries and it helps to do movements like these for short and long-term longevity of the joints.

You cannot rush heavy kettlebell overhead presses (or any weights), both for safety and effectiveness. Any shoulder press using the oddly-shaped kettlebell will really challenge you to balance the weight overhead but also keep it overhead and not in an awkward position which makes the movement less efficient.

Has carry over to other exercises

If you do Olympic-style lifting, CrossFit, or simply want to get better at functional fitness and strength training, then doing alternating overhead presses using a kettlebell should have carryover to these activities.

Freeweight training is anything but stable and weak primary or secondary muscles can cause energy leaks that affect your performance.

Your core group of muscles are crucial when it comes to doing any form of exercise, especially ones that involve the entire body. If you cannot brace your midsection and keep it rigid enough, well, you won’t be able to lift moderate to heavy loads.

The good news is, resistance training builds a stronger core the more you progress in your workouts.

Include variety in your training

The kettlebell seesaw press mixes things up from the average workout program that focus on the basic lifts. And because the kettlebell is a unique design, it’ll challenge the muscles and stabilizers in a different way, especially when you start using heavier weights.

There’s one drawback to this exercise, in our opinion.

This is especially important for the first part of the kettlebell seesaw press when you have to double clean the weights by using a swing to get them into position.

If using light kettlebells, you could get away with simply picking up the weights and getting them into position. However, it’s most efficient to do a double clean, especially if you plan to progress with this movement and do it safely both when picking up and setting the kettlebells back down.

There’s a right and wrong way to use kettlebells.

The kettlebell seesaw press has its own advantages. But we also like these variations that mix up training and target different components of fitness and performance ability.

The bent press is a great exercise but also a good progression movement before you do a single and double kettlebell press. It helps to develop the muscles that assist and stabilize.

While we prefer kettlebells here, you could also use dumbbells whether you just prefer them or you don’t have access to kettlebells.

Here’s a video showing how to do the dumbbell kettlebell clean.

This is a more advanced exercise and you should be able to do a single-arm kettlebell press before you can safely and effectively do the kettlebell double press.

Watch this video tutorial to learn this press.

If you want to challenge yourself even more, the kettlebell double to seesaw press is where it’s at. This movement combines the two-arm press and seesaw press.

You want to alternate this pattern for the desired number of reps.

There are a lot of great ways to incorporate this movement and each one may offer its own unique advantage. Training variety is very important for making progress but also preventing boredom which is actually more important than a lot of people realize.

Here are some ways we would incorporate this exercise in our workouts.

CrossFit involves a lot of kettlebell focused exercises and training and the clean and press are very common in these types of workouts.

Circuit training involves performing several exercises one after the other with little to no rest in between. This is one of the exercises we’d add in because it’s challenging, keeps your heart rate up, and burns calories.

You actually don’t have to do a special workout to do this exercise. You can do the standard 3-4 sets with 30-60 seconds rest in between. This may also be the best option if you’re using heavy kettlebells because it will allow you to take longer rests in between and focus on increasing the poundages.

There’s no perfect strategy here as you should train according to your goals. We recommend using all different sets and reps combinations to maximize your progress. Here are our set and rep recommendations depending on what your focus is.

The kettlebell seesaw press works a variety of muscle groups including some that help to assist in the exercise. We’ve included descriptions for the muscles involved below.

The deltoid anterior or front delts is one of the three heads that make up the shoulder muscles.

This muscle is involved in arm flexion, stabilizing the arm while the deltoid lateral abducts the arms (raise the arm away from the midline of the body).

The seesaw press is a front delt dominant exercise.

The deltoid lateral is primarily responsible for abducting the arm from 15 to 100 degrees. It also helps to prevent displacement of the glenohumeral joint when the arm is pressed up against the body and under load.

When well developed, the lateral deltoids contribute to roundness of the shoulders and upper body width.

The serratus anterior, also commonly called the “boxer’s muscle”, is a fan-shaped muscle located along the outer ribs between the pectoralis and latissimus dorsi muscles.

The long head starts from the shoulder and extends down to the elbow.

Overhead presses work the upper chest to a degree.

The rectus abdominis is also commonly referred to as the abs or abdominals. These muscles are front and center when the shirt comes off and create the highly sought-after “six pack” look.

The abdominals are responsible for crunching both the pelvis and rib cage toward the stomach (e.g., crunch variations, sit-ups, etc).

The obliques (external and internal) are core muscles located on either side of the rectus abdominis or “six-pack” muscles. They facilitate trunk rotation and contralateral rotation, and with the erector spinae and rectus abdominis, the obliques help with lateral flexion of the trunk.

While there’s not much rotation during the seesaw press, the obliques are still engaged.

The kettlebell seesaw press is a phenomenal exercise variation that we recommend for any and everyone. It has so many benefits and is one of the best ways to mix up your upper body training, in our opinion.

Kettlebell training has its own advantages, one of which is that it’s absolutely great for improving functional aspects of fitness.

Try this exercise next time you train if it’s not already a regular movement in your routine and we think you’ll understand why it can be great for your progress. There are also some awesome variations of the kettlebell seesaw press and we encourage using them too as training should be fun and exciting as well as effective.

Your shoulder muscles, correctly called your deltoids, are made up of three sections of fibers called heads. The anterior or...

An all-around beneficial movement, the kettlebell hang clean is great for building functional strength in ways most are not used...