Roelly Winklaar shows off his massive arms while hinting at a comeback, as William Bonac also give a sneak peek of his physique 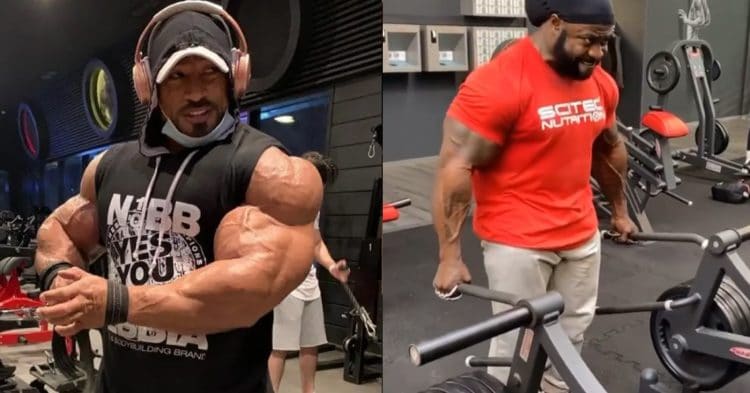 It has been a long time since Roelly WInklaar was seen onstage, competing in a bodybuilding show. However now it seems that a return could be imminent, after a recent update from both he and William Bonac.

As much as many would argue that the sport of bodybuilding is much better when Winklaar is actively competing, it has been a while since that has happened. In fact, he has not competed since 2019.

After a strong fifth place showing at the 2019 Mr. Olympia, Roelly made a quick turnaround to compete at the Yamamoto Pro. While he won the contest, earning an invite to the 2020 Olympia, a bout with COVID-19 forced him to pull out of the event just a few days before it started.

That may have been the most recent time we saw Roelly Winklaar compete, but we got to get a glimpse of his physique recently, during a guest posing at the 2021 Emerald Cup. It was clear here that he was still in tremendous shape, and this appearance had many yearning to see him back on stage.

It would appear that this time will be coming soon, if a post to his Instagram is to be believed. Here, the Curacao native showed off his enormous arms, while hinting that a comeback could be in the cards for the near future.

There are some people who believe that he could have been the Mr. Olympia winner in recent years. While your mileage may vary on that idea, it cannot be denied that he has an amazing physique, even after this long layoff.

One of the biggest proponents of the idea that he should have won the Olympia, is William Bonac. He also shared a few updates recently, that had fans chomping at the bit to see him return to action soon, as well.

He is also looking to be in phenomenal shape, just like his friend Roelly Winklaar. This is clearly a product of the work he has been doing in the gym, which he also showed with a subsequent post demonstrating some heavy shrugs.

Hopefully with these updates, we can look forward to seeing both Roelly Winklaar and William Bonac on stage competing soon. It will be interesting to see what they still have left to offer this year.

Get Back to Old School Training Without the Tech