Ronnie Coleman Explains That He Will ‘Never Gonna Quit Working Out’

The 8x Mr. Olympia doesn't care that people think he should stop training! 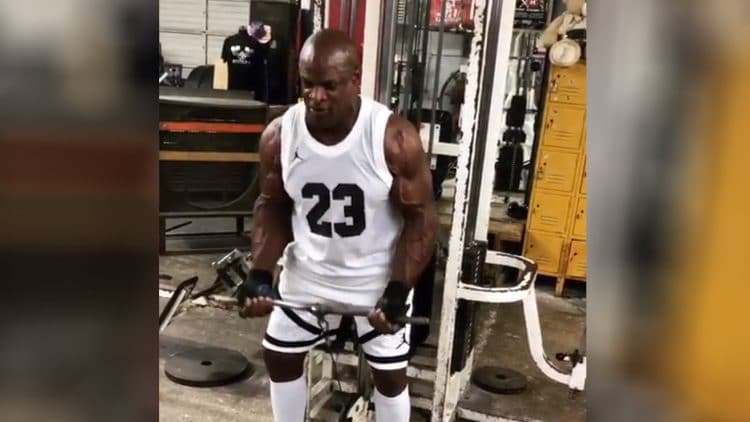 Ronnie Coleman has been hitting the weights pretty consistently as of recent and he’s not shy about letting people know that he will never stop training, despite so many people saying he should stop for his health. Now, Coleman had several back surgeries after his career in competitive bodybuilding but he almost faced a harsh reality of never being able to walk again.

He trained in between a few surgeries before he could recover which many believed to have caused him to have to undergo additional surgeries.

Well, he denied his training as being the cause but then it seems, later on after it was obvious to him that the training was causing the problems; he understood that he needed to fully recover and that workout out would make his situation much worse.

But the 8x Mr. Olympia champion came through and is still doing what he loves… and yes, he can walk. But he’s obviously not at his best. Although, he’s still sporting some impressive guns for what he’s been through and the fact that he’s 55 years old.

Here’s a recent video of him training and an Instagram message explaining how little he cares when people say he should quit training.

Even directing a comment toward the 2008 Mr. Olympia winner Dexter Jackson (@mrolympia08)…

“There’s nothing better to do on a Saturday night than have a nice back and biceps workout.

Yeah I know what some of you are thinking and no I’m NEVER gonna quit working out.

Working out is the best thing to happen to me all day. I would rather workout than eat or sleep. I’m coming up on year 43 when it comes to working out.

I fell in love with this when I was 12 years old and I’ve never stopped since I started. So @mrolympia08 and all the rest of you guys, quit wasting your breath and your time commenting and giving out y’all’s lame ass advice about me quitting.

Trust me I love you guys to death for being concerned about me but it’s not gonna happen. In closing I would like to say, oh yeah it ain’t over mulbuckers, once again it’s on like Ding Dongs.”

It’s clear Ronnie Coleman has no intentions of giving up what he loves to do more than anything… like eating and sleeping even.

Ronnie Coleman is one of the most successful bodybuilders on the planet, though he has been enjoying retirement in his...

Bodybuilding legend Ronnie Coleman recently shared three keys to building muscle. Coleman is regarded as the 'Greatest Bodybuilder of All...