It is time for an upgrade. Get rid of your tiny spare wheels, forever! 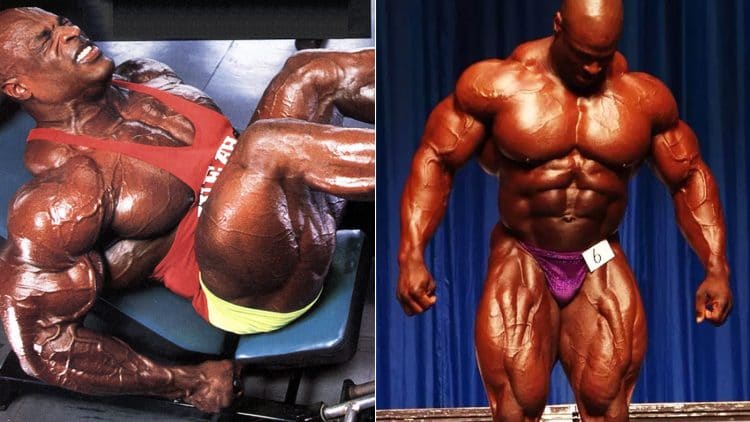 Coleman saw what Dorian Yates had started and pushed it to its limits. Before Yates, bodybuilders primarily focused on muscle symmetry and conditioning, but he turned the game on its head. Dorian Yates got so huge that he single-handedly turned the bodybuilding events into freak shows.

Ronnie Coleman took it to a whole new level and out-sized all his opponents on stage. Ronnie Coleman won the Mr. Olympia title for eight consecutive years and came to be known as the “King of Bodybuilding.” The muscle mass wars we see today on Mr. Olympia stage are Coleman’s giving.

Just as Columbus discovered America, Ronnie Coleman deserves the credit for uncovering how far the human body can go in terms of muscle mass. In his hay days, Coleman’s legs were a spectacle to watch. His legs are a combination of hard work and genetics. Although you cannot do much about your genetics, you can strive to develop your twigs into trees with Ronnie Coleman’s leg workouts. 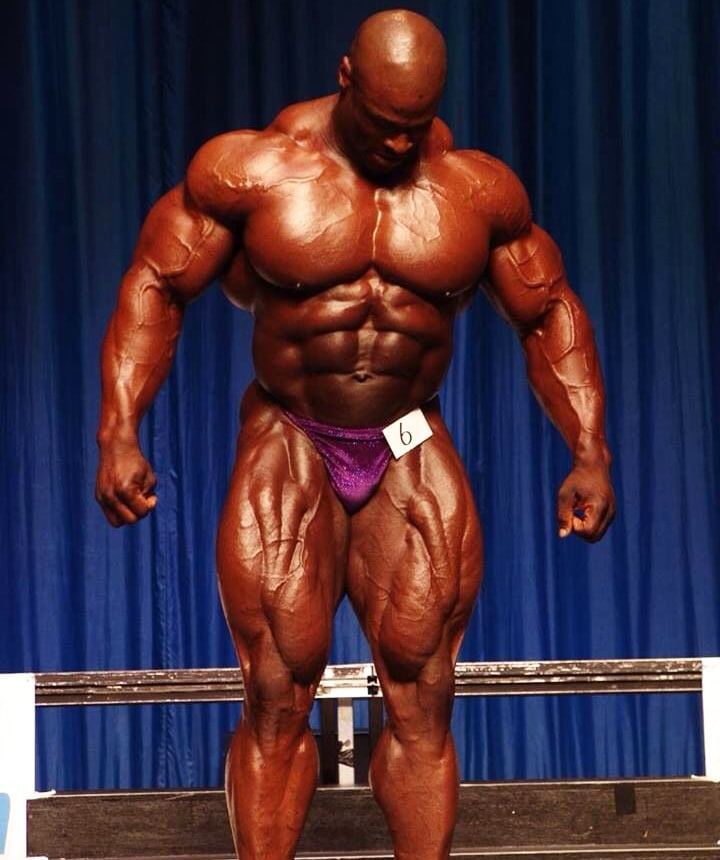 If you want to transform your legs, you need a customized training program. If you don’t think having a workout plan is vital to a successful transformation, you should save yourself the trouble of going to a gym. As Benjamin Franklin once said —

‘If you fail to plan, you are planning to fail!’

Many people make the mistake of switching training programs too often. They should take a leaf out of Coleman’s book and stick with tried and tested principles to shorten their transformation journies. Coleman prefers a few exercises that he claims target his muscles optimally. No matter what exercise he performs, he follows the same principles.

Watch Ronnie’s leg training videos closely, and you’ll notice that he never locks out his knees at the top of the movement on a squat or leg press. If Coleman would have been training at a normal gym, we bet brofessors would call him out for not maintaining a full range of motion.

Why are partial reps so effective, you ask?

Ronnie Coleman believes that the bottom position (and not the top) of most quad-focused exercises is what makes his quadriceps grow.

Coming 70% of the way up and then dropping back down maximizes the amount of time he spends in what he believes to be the most productive part of the movement.

Related: A Rep And A Half Routine – Bodybuilding Routine That Works 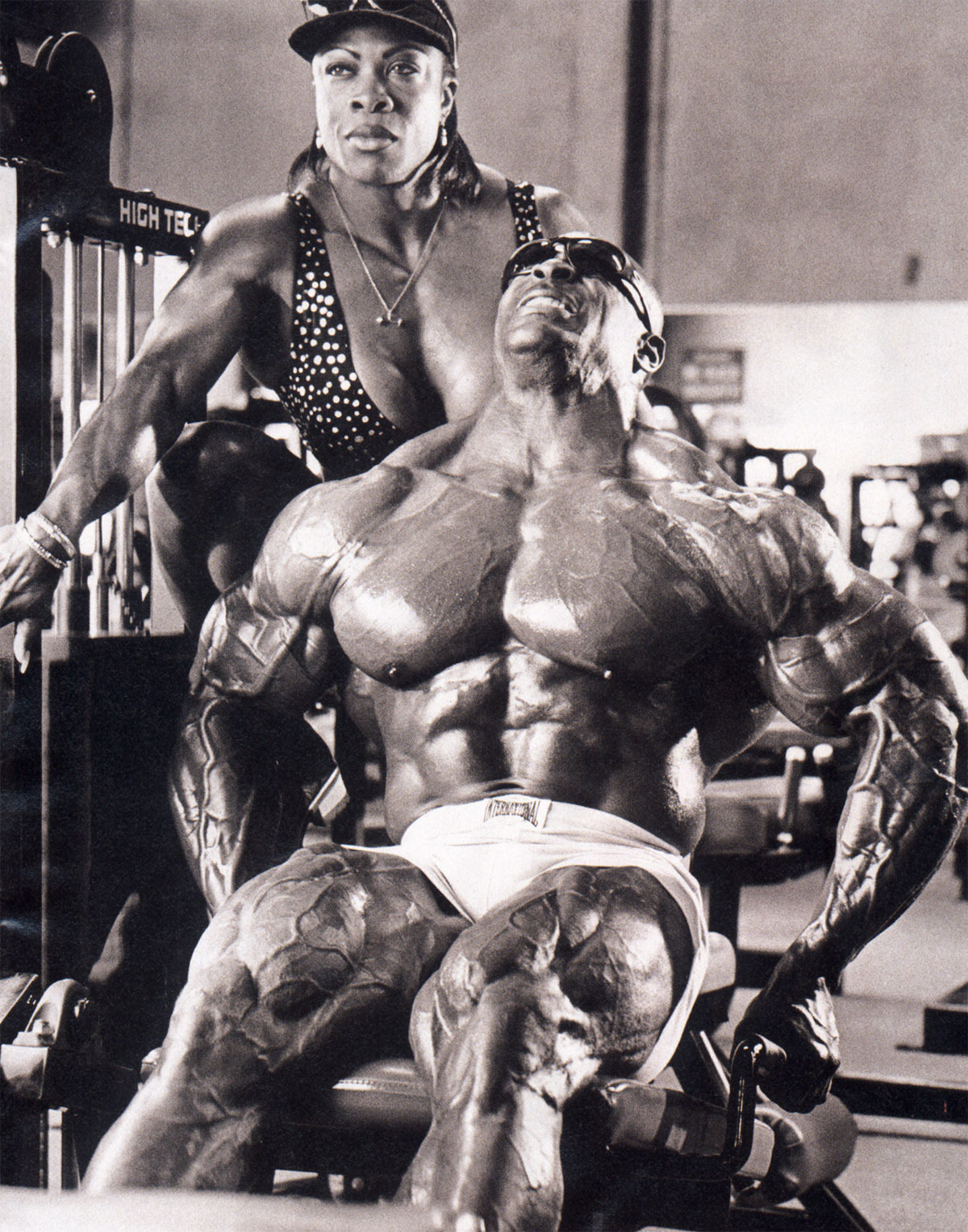 Many people lift the same amount of weights for the same number of repetitions every day in the hopes of building muscle mass. The day your muscles get used to your workouts is the day they stop responding – and growing.

If “bodybuilders do not lift heavy, weightlifters do” is your defense for not using challenging resistance, your future inside the weight room is gloomy. Training to get stronger over time will help you improve muscle stimulation and recruitment.

Ronnie tried to train with heavier weights every year while he was competing. If you can lift a particular amount of weight with relative ease, you should pick up heavier weights for the next round.

Coleman went super heavy on mass-building exercises like squats, hack squats, and leg presses. On the other hand, he trained for the pump on exercises like lunges, leg extensions, and curls.

3. Butt To The Ankles

Coleman believes that going “butt to ankles” gives him the most muscle stimulation. You might have heard that going so deep could hurt your knees or lower back, but it has worked great for pros like Coleman, Tom Platz, Kai Greene.

Gym bros will tell you that going so deep can cause your knees to lock out at the bottom. The King believes that going ass to the grass builds up tension in your thighs that gives you the power to push through the lowest point of the squat.

Some people have trouble following a full range of motion due to a lack of mobility within the joints, stiff shins, calves, or lower back and bad knees. If you are one of these people, going a little below parallel should work just fine. 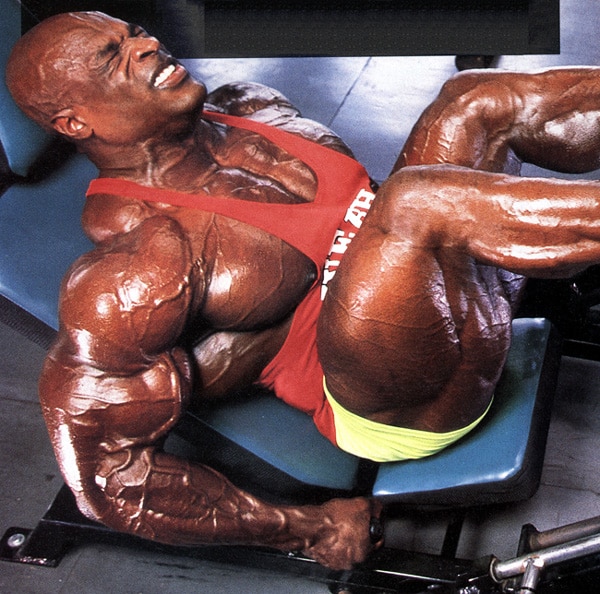 You limit your muscle development every time you get into the weight vs. reps argument in resistance training. You should save yourself the trouble and go the Ronnie Coleman way by lifting heavier weights for a higher number of reps. Why settle for one when you can have both?

The 8X Mr. Olympia performed 10 reps of front barbell squats with a monster 500 lbs. He then moved on to isolation exercises and performed up to 20 repetitions of each lift.

Also, as you would see in the workout videos below, Ronnie worked in a bare-bone gym and did not rely on fancy equipment. In the end, your training intensity is going to make all the difference. Remember: Doing ordinary stuff in the gym and expecting extraordinary results will get you nothing more than disappointment and frustration.

Although he was one of the strongest bodybuilders in his competitive days, Coleman did not focus too much on how much weight was on the bar. He trained with the goal of muscle annihilation and not to stroke his ego.

Ronnie Coleman’s leg workouts usually started with a warm-up with 4 sets of 30 reps on the leg extension in a pyramid fashion to prepare for the squats. After his squat menace, without worrying too much about the weights he was lifting, he focused on muscle stimulation in exercises like leg extensions, leg curls, walking lunges.

Coleman also spent a decent amount of time cooling down after his workouts. Stretching was a crucial part of his workouts, and he did not leave the gym without doing some quad, hamstring stretches, and a full split.

6. Train With A Spotter

A spotter can help you take your workouts to the next level. Ronnie almost always had a spotter, but you’ll hardly ever see the spotter assisting him with his sets. In Coleman’s case, the spotters helped him strip the numerous weight plates he had on the bar during drop sets.

If you thought you could build legs like Ronnie Coleman by training them once a week, you are in for a rude shock. You will have to suffer self-inflicted nausea twice a week to add muscle mass to your legs.

Coleman trained each muscle group twice a week using a push/pull/legs split. If you want to leave nothing to chance, here is the exact training split Ronnie followed throughout his bodybuilding career:

Do not be fooled by the exercises on Coleman’s leg workout schedule. He kept things simple but destroyed his legs through his workout intensity.

Squats, leg presses, hack squats, and leg extensions are a constant in the police officer’s workouts. He starts his workouts with some heavy-ass squats and can be seen squatting 800 lbs for four reps in the video above.

Ronnie’s squatting technique is not for the faint-hearted. He does not stop for rest at the top of every rep. Coleman turns into a machine as soon as he has a bar on his back. No matter how pumped your legs are, never leave a set, exercise, or workout unfinished. Prove your mettle and worthiness for the monster wheels by following the Coleman workouts to the T.

Leg press will mean something entirely different to you after you watch Ronnie do the exercise. Many people use leg press as a “cool-down” exercise after squats, but that is not what Ronnie Coleman is about.

He does not half-ass his way through any lift. The owner of the Metroflex gym had to legit pop out a calculator to figure out how much weight was on the machine.

Ronnie Coleman usually does five sets of the leg press and pyramids up to the heaviest on the fourth set. After hitting failure on the fifth set, he has his spotters remove one plate off each side and knocks out reps until failure. He repeats this until there is only one plate remaining on each side.

Coleman performs high repetitions on the leg extensions to build definition and striations in his legs. Follow the same technique as in the case of leg press. Pyramid your way up to the heaviest weight on the fourth set, hit failure on the fifth, and then drop the weights until you go through the entire stack.

For this workout, the 8X Mr. Olympia’s hamstring routine includes kneeling leg curls and stiff-legged deadlifts. He emphasizes establishing a strong mind-muscle connection with posterior muscles and training them to failure.

When was the last time you saw someone front-squat 500 lbs? Watch enough Ronnie Coleman workout videos, and you’ll realize he got no chill.  Studies have shown that front squats are better than back squats at isolating the quadriceps. Front squats are also advantageous for people with knee problems such as meniscus tears and long-term joint health.

For machine hack squats, follow the same principle as leg press and extensions from the previous workout. By the end of the exercise, your quads will be begging for mercy.

Walking lunges might look easy but are lethal enough to kill you. Coleman took the walking lunges to another level by doing them under the scorching Texas sun.

Ronnie’s hamstring routine in the second workout is rather straightforward. He believes that his hamstrings get enough stimulation through the first leg workout and other exercises like the deadlifts and bent-over rows that he only needs these two exercises to wrap up his hamstring training.

Remember: The goal here is to train to failure while maintaining a mind-muscle connection. You should feel every muscle fiber in your hamstrings working while performing these exercises.

Ronnie Coleman believes that high intensity paired with heavier weights and higher repetitions can take your leg gains to the next level.

The exercises Coleman uses can be done by anyone irrespective of if you are a beginner or an advanced lifter. But before you try “lifting peanuts” Coleman style, we recommend that you first master the correct form of performing these exercises.

You could also watch these workout videos as motivation for your leg training sessions. Coleman training videos are not only great pre-workouts but are also potent intra-workout fixes.

Finally, I leave you with my favorite Ronnie Coleman quote-