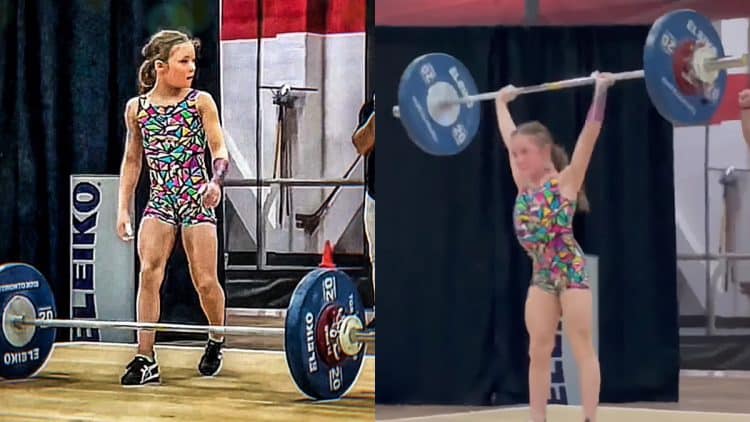 Rory Van Ulft, a 9-year-old gymnast and weightlifter, made history recently by becoming the youngest person (men and women) in history to Clean & Jerk 2x her bodyweight in a competition. Rory lifted a total of 66 kilograms (145.5 pounds), while her own bodyweight was only 32.8 kilograms (72.3 pounds). This means that Rory was able to lock out more than twice her own bodyweight above her head, an accomplishment that is truly remarkable for anyone, let alone a 9-year-old child. The video footage from the competition was shared on Rory’s official Instagram account.

The incredible feat was accomplished at the 2023 Variety Village Open, which took place on January 21st, in Toronto, Canada. Prior to this event, Rory had already broken six provincial 15U and 17U records at the same competition, but this lift served as a cherry on top.

Rory Van Ulft’s total score for the day at the competition came out to 254.39 Sinclair. This score means that it was also the best ever official performance by a woman in the 40-kilogram weight class, adding another achievement to Rory’s amazing resume.

Rory Van Ulft’s name has already been in the headlines, since she has amazed a sum of people with her deadlift prowess. She has achieved various feats of strength, but one of her greatest came in September, when Rory deadlifted 111 kilograms (244.7 pounds). To make it more significant, that deadlift came out to 3.43x her bodyweight. Considering Rory’s incredible deadlift strength, it is easy to understand why her clean and jerk are absolutely incredible.

Rory Van Ulft’s goal is to compete in the Olympics one day, and she has two ways of doing it. Seeing that both weightlifting and gymnastics are featured at the Olympic Games, it is just a matter of time when Rory will accomplish it. In addition, seeing how dominant she is amongst her peers, Rory could very possibly end up winning some medals there as well.

Rory Van Ulft is already a 3x US Youth National Champion, despite competing in the division of 13-years-old or younger. She is constantly beating athletes significantly older than her, while some of her performances are also greater than what many boys of the same division can put up.

The proportions of the weight that Rory is lifting and her own bodyweight are unfathomable. So, when also taking her age into the equation, Rory is clearly putting her name into the history books as one of the greatest and strongest 9-year-olds ever. She will be turning 10-years-old in around two weeks from now, which will bring some new adventures and mind-blowing feats of strength.

8-year-old weightlifter Rory Van Ulft started training shortly after her fifth birthday. She then went on to become the USA...