Rory Van Ulft is already a very successful weightlifter and at only 9-years-old, she can pull some incredible weight. 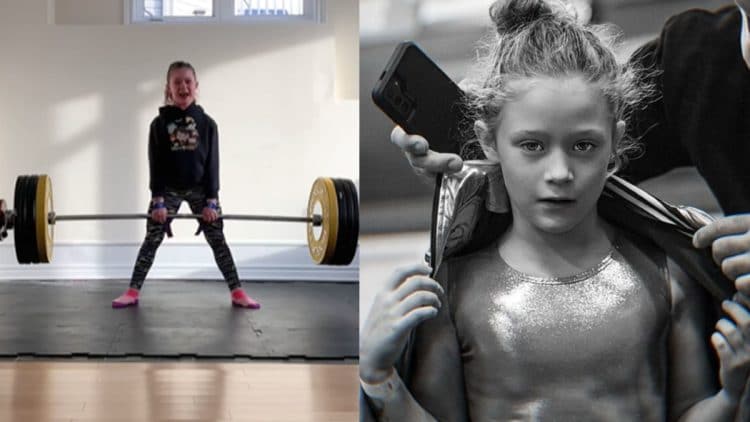 Most of us didn’t get the grip of the deadlifts until our late teen years, but a 9-year-old weightlifter, Rory Van Ulft, has already perfected it. On April 2nd, Rory attempted to claim her first major PR, and scored the 100 kg (220 lbs) deadlift milestone. Her attempt was successful after a long battle with the bar. She also only weighed 30 kg (66 lbs) at the time of the lift. This means that Rory Van Ulft has managed to pull 3.2x her bodyweight.

Another important factor of Rory Van Ulft’s 100 kg (220 lbs) deadlift is that it was done without a lifting belt. The only equipment she needed was a pair of lifting straps. Rory was also using a sumo stance for this lift. The beginning of the pull did not look too promising, but after separating the weight from the floor, Rory’s lockout phase looked incredibly comfortable.

Rory van Ulft’s 100 kg (220 lbs) deadlift even left the 5x WSM Competitor, Travis Ortmayer, in awe, as he left a comment under the post, Holy shit. The deadlifts have a lot of carryover on the snatches and clean & jerks, so Rory’s recent improvement will be very beneficial in her future weightlifting journey.

Rory Van Ulft’s main sport is weightlifting, despite her potential for powerlifting. However, she has previously revealed to us that her goal is to compete in the Olympics one day. She has already claimed some extremely impressive achievements in the sport, and is considered one of the greatest rising stars in the world. Rory Van Ulft is the reigning US Youth National Weightlifting champion at 30 kilograms in the 13 & Under division. She has won two consecutive titles in the 2020 and 2021 editions of this competition. While taking part in them, Rory was also just 7 and 8-years-old respectively, which makes her the youngest ever to win this competition.

Rory Van Ulft’s lifts at the 2021 US Youth Nationals were also National Records in both events and the total. Her numbers from that competition were:

Although nothing is official, it would be surprising if Rory Van Ulft does not show up at the 2022 US Youth Nationals Championships. The competition will take place from June 25 – to July 3, 2021, in Las Vegas, Nevada. Rory still has 4 years left in the 13 & Under age division, so she will probably absolutely destroy all the records by then. In addition, if she can deadlift 100 kg (220 lbs) at this age, it will be amazing to see how much Rory will pull once she gets into her teen years.