'The Persian Wolf' showed off his current physique a little over a month following his 2022 Mr. Olympia victory. 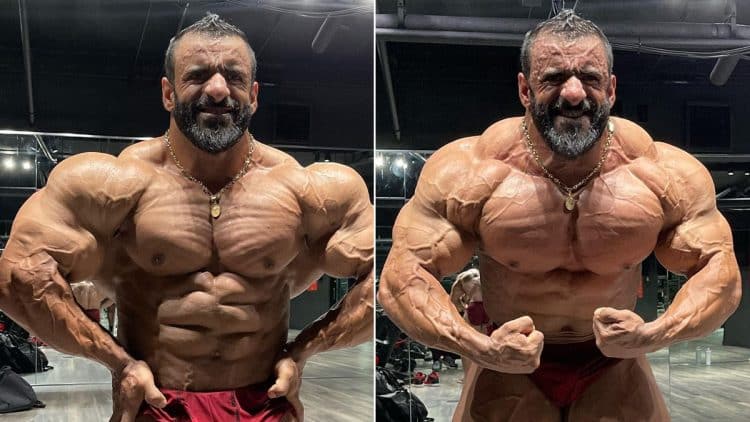 Hadi Choopan is taking full advantage of the rebound period following his major victory last month at the 2022 Mr. Olympia contest. In a recent post made to Instagram, Choopan showed off his peeled and vascular upper body during the 2023 off-season.

A former 212 Bodybuilding competitor, Hadi Choopan switched to the Open in 2019 and found success immediately by claiming gold at the Vancouver Pro. This earned him an invitation to his first Olympia show, where he debuted in third.

Instead of grinding away at various pro shows, the Iranian native used the time to try and craft a better package. However, he ended up dropping to fourth at the 2020 Olympia competition. His consistent nature paid off at 2021 Olympia though as he recemented his status as number three in the world.

On his fourth Mr. Olympia attempt (2022), Hadi Choopan won and brought arguably the most conditioned package of anyone on stage. He dedicated the victory to the women of Iran and became the first Iranian-born Mr. Olympia champion.

His victory stirred a little controversy among bodybuilding veterans. Names like Rich Gaspari and Flex Wheeler implied that the Mr. Olympia is no longer won from the back. Gaspari compared the detail of Dorian Yates’ back with Choopan’s and said competitors today lack dryness.

According to Choopan, the comparison was unfair and cited a number of factors that affect picture quality. Moreover, he suggested the juxtaposition was like comparing Gaspari’s arms to eight-time Olympia great Ronnie Coleman.

Taking advantage of his time away from the stage, Choopan gave fans a physique update where he showed off a couple poses.

Weeks following his first Olympia victory, Choopan was mobbed by fans in his home country of Iran. His coach, Hany Rambod, recently broke down what it was like training Derek Lunsford and Choopan at the Olympia last month. He said the experience reminded him of when he trained Jay Cutler and Phil Heath at the same time for Olympias from 2009-2011.

Instead of taking an entire off-season to improve, Walker decided to enter the 2023 Arnold Classic. Seasoned bodybuilding coach Chris Aceto believes if Walker pulls off the victory in Ohio, he’ll have a lot of momentum going into his next Olympia against Choopan.

Derek Lunsford is another top threat to Choopan at the next Olympia event. He has opted to skip the 2023 Arnold. He wants to use the time to focus on his health so he can bring a package worthy of dethroning his teammate when he steps back on stage.

The reigning champion is determined to replicate the success he had in 2022. Judging by his off-season condition, Choopan plans to bring an even better package to the 2023 Olympia contest in November.