Dexter Jackson kills back day training in the gym. 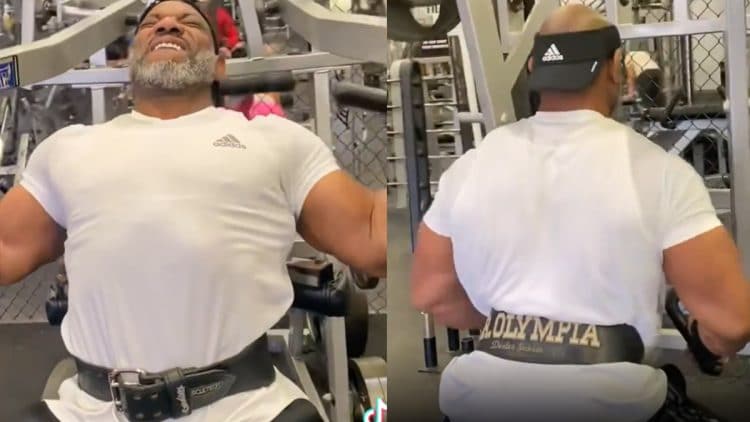 Retired IFBB Pro Dexter Jackson is maintaining a monster physique while enjoying retirement. In a recent post on Instagram, Jackson showed that he’s not slowing down after hitting some demanding back workouts.

Jackson has competed in the sport for nearly three decades and has faced some of the most prolific bodybuilders to ever grace the stage. He holds the distinction of having won the most bodybuilding shows (29). Along his path as a Pro, Dexter realized the pinnacle of his career after defeating fellow legend Jay Cutler in 2008 to win his lone Mr. Olympia title. In addition, he’s found plenty of success while competing at the annual Arnold Classic, a show in which he’s won a total of five times.

Before competing at 2020 Mr. Olympia, “The Blade” decided that win or lose, he would retire from the sport, a decision he followed through with after placing ninth. However, given his ability to lift heavy weights while in retirement, many fans are wondering if the legend still has enough juice for one more show.

Olympia President Jake Wood hinted that Masters Olympia, a competition for older bodybuilders could return soon. Wood went so far as to say “definitely by 2023“. Jackson would be the perfect candidate to compete at the event, especially after seeing him plow through exercises on social media.

Dexter Jackson Not Slowing Down in Retirement

The bodybuilding legend took to his Instagram page and demonstrated a series of back workouts. During the training footage, Dexter practiced some bent-over reverse cable flyes and utilized machines for a variety of workouts.

At the end of last year, Dexter appeared noticeably downsized after sharing a training video. Though, it looks like Jackson has since put on some mass, especially in his arms and biceps. Taking to the comment section, even two-time Classic Physique Olympia champ Breon Ansley expressed excitement for Dexter’s possible comeback, writing, “We waiting patiently on that comeback💪🏾🥇” In response, Dexter laughed it off by replying with “Lmao! Y’all gone be waiting a lifetime lil bro”.
Spanning from 1994 to 2004, a Masters Olympia champion was crowned. The show was brought back in 2012 by popular demand, and Dexter Jackson walked away with the first-place trophy.
Dexter would be an ideal competitor for the returning Masters Olympia but has consistently brushed off the notion of one day competing at another big show. Following his epic career, Dexter has utilized hormone replacement therapy to reinvigorate his body after a lifetime of competition.

Here are the Masters Olympia Winners:

Dexter maintained an incredibly busy schedule as a bodybuilder and has yet to express clear intentions of mounting a return to the sport. Nevertheless, fans don’t miss an opportunity to nudge “The Blade” to once again perform on stage.

At 52 years old, Dexter is defying father time with an amazing physique. While he downsized at the end of last year, it certainly looks like he’s packing on some muscle now. Dexter may not appear interested in a bodybuilding return, but he’s staying incredibly healthy in retirement.