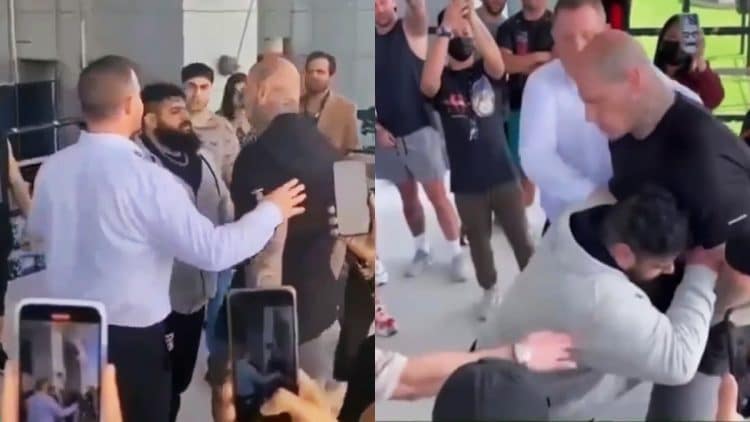 The excitement around the boxing match between Iranian Hulk Sajad Gharibi and bodybuilder Martyn Ford went to a different level when the two faced off for the first time. Ford and Gharibi have exchanged barbs on social media for the past several months and the rivalry quickly turned into a bitter affair. Recently, when the duo shared the stage for their first staredown it went exactly as it was expected. Sajad Gharibi and Martyn Ford came to blows on stage and had to be separated to precipitate the situation.

Sajad Gharibi and Martyn Ford will settle their beef on April 2nd in the O2 Arena in London. They met for the staredown on Thursday morning. At first, Sajad Gharibi initiated the heated exchange and grabbed hold of Martyn Ford in an attempt to take him down. They were separated and stood for the stare down once again. This time, it was Martyn Ford that got the better of Gharibi and sent the Iranian Hulk to the ground with a shove. Those around had to intervene and separate the big men to avoid the situation from escalating further.

Sanctioned by the Professional Boxing Association, the fight is a four-round exhibition. Each round will be two minutes long. It is a Boxstar Celebrity Boxing event and Sajad Gharibi vs Martyn Ford will be the main event. The card has 12 other fights on the undercard. The recent altercation between Sajad Gharibi and Martyn Ford ensured that there was enough hype created around the event five weeks out. Considering the main event and the line-up of 12 solid fights, it seems that the iconic O2 arena in London will witness an exciting night of fights.

Martyn Ford and Sajad Gharibi are physical specimens that carry superhuman attributes. While Ford is 6ft-9in tall and 300lbs, Gharibi is a much shorter 6ft-2in and 390lbs individual. On paper, it appears to be a battle of reach versus brute power and size.

Martin Ford vs Sajad Gharibi was announced back in October 2021 and it will mark Gharibi’s boxing debut. Both men have trained vigorously for the fight and have shared their training videos on social media to build up the fight into a mega affair. Ford has been training with elite fighters as of late and has experience in MMA and Brazilian jiu-jitsu.

Interestingly, around 20 thousand fight fans are expected to attend the event. However, there will be only one winner on April 2nd. Who do you think it will be?