Pro bodybuilder Sergio Oliva Jr. shares his disappointment with the art of posing in the Open division. 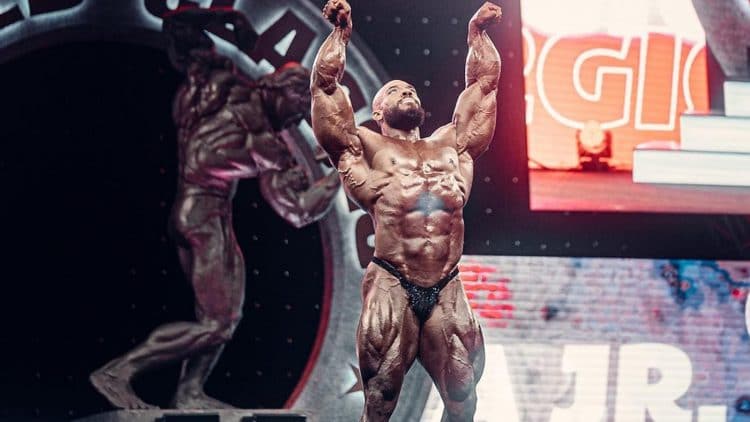 Open pro bodybuilding competitor Sergio Oliva Jr. took to social media recently where he expressed some frustration regarding the attention given to the posing portion of competitive Open bodybuilding.

This comes right after the 2021 Arnold Classic Ohio that took place over the weekend of which Oliva Jr. competed in and placed 6th. He also won the “Best Poser Award” for the second consecutive year.

Sergio has followed the footsteps of his legendary father and three-time Mr. Olympia Sergio “The Myth” Oliva. Not to mention, his mother was also a successful competitor. Perhaps this also contributes to his passion on the subject.

“I’m starting to feel posing is officially dead in open bodybuilding,” he wrote on Instagram.

He then went on to explain that it seems only a few other guys in his division aside from him really puts effort into their posing routines. What’s worse is Sergio gets the feeling that the judges and sport, in general, just do not care anymore.

“There’s realistically 2-3 guys besides me who even make an effort. But mostly I feel the judges and sport just don’t care. Anyone who knows me knows I have done a choreographed routine since I was a 176lb middleweight in NPC. Over 15 years of different routines never doing the same routine twice.”


While posing is just one component of competing in the sport of bodybuilding, the Chicago native doesn’t think posing should give competitors a huge advantage especially if someone brings a better overall package.

However, he does feel that it should be important enough that if two guys are neck and neck, the one with a superior posing routine should be acknowledged for that.

“I don’t think a posing routine should make you beat guys who are better than you or anything on that level but I did believe if it’s close between you and another guy it should give you the extra nod. The guy who practiced and portrayed a bit of art or even just came up with a bad ass exciting routine just to put on a show should be rewarded or even respected.”

“Making at least 1 or 2 younger people watching say “one day I wanna be like that” and actually gets into the sport because of a performance that touched them.”


And while no one can say that bodybuilders get into the sport just for the prize money, the gap in payouts between a first and a sixth-place finisher is huge, especially at this level. It’s clear that his frustration comes from the fact that he does compete at the highest level in the sport and doesn’t his efforts are taken seriously.

He even put it to the test…

“On a pro level it does matter if you move up one spot because it’s the difference between 5k-15k depending on what show, which helps pay for so much for your family.”

“I appreciate when someone even just tries. I did feel I should’ve been up a spot or two just on condition and symmetry especially coming back harder and drier at night (but that’s a different conversation) but I def told myself no matter what I would move up if it was close between me and the guy who put absolutely zero effort into his routine….. and it didn’t…..”

Although Sergio does go on to say he’d apologize for what he believes to be his worst routine yet.

But at this point, he feels there is no point anymore…

“All the hours of practicing, studying routines, hurting my knees and joints, and giving myself rug burn really didn’t matter. I’m glad I could put on a show for @schwarzenegger himself and my fans that care about me at the Arnold and I did want to say i’m sorry to them also, because that was the worst routine I’ve ever done in my career.”

“So I think I’m done doing routines….”. “No one in the sport cares let’s face the facts. Low key I always thought judges watched me since I was a kid fucking try my hardest to make shows entertaining and help sell tickets/live streams to ultimately make the sport better and keep alive some of the virtues from the past…..but they don’t. Shoutout to all the men and woman who bring art to the sport who don’t even get any respect✊🏽”

Sergio seemed to receive a lot of support in the comments where many agree with his statements. He’s known to be one of the more outspoken competitors in the division, never shying away from saying what’s on his mind.

But it’s also important to mention that to his defense, there was some controversy regarding the 2021 Arnold Classic scorecards.

Seeing as Sergio did win the Best Poser Award, it only makes sense that his routine points would reflect that on the scorecard. After all, it’s one of the judging categories, as we all know.

However, that wasn’t the case. In fact, his routine points were that of his sixth-place finish. Therefore, the five competitors who placed ahead of him all received higher scores in the posing category.

But most would without a doubt put his routine near, if not at the very top, as he clearly deserved the Best Poser Award. So the format of the scorecard is causing a lot of confusion and this no doubt warrants some sort of explanation. 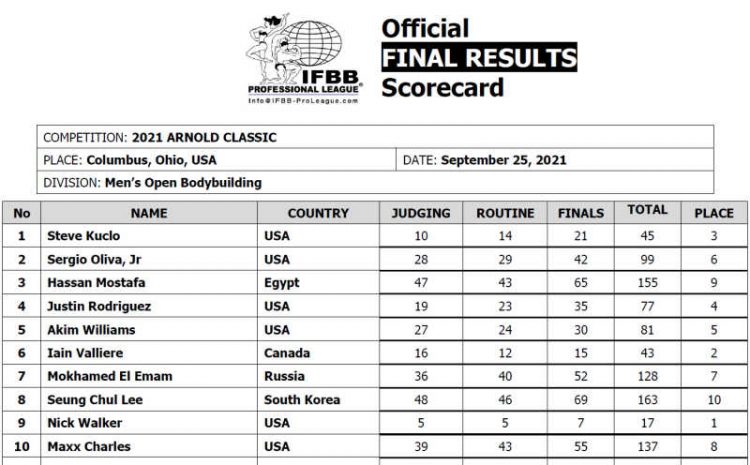 Arnold Recap and Next Show

Sergio also posted a video to Instagram the day after the Arnold Classic where he shared some interesting details from the event and discussed some other topics.

It’s no secret he’s been through lots of ups and downs in recent years but he explained that it felt good to be back on stage since last competing at the 2020 Arnold Classic where he placed 5th.

Related: Sergio Oliva Jr. Hospitalized With ‘The Worst Pain I’ve Ever Been In’

Although he admitted the 2021 Arnold was the worst he’s looked, it was one of the best experiences he’s ever had, mainly because of how well all of the Open guys got along during the event.

Oliva Jr. also addressed some of the bodybuilding drama including some back and forth between he and Nick Walker and even praised the young champion for his amazing shape. But admittedly, a lot of the trash talking that goes on is to draw interest to the sport.

“Going into the show we looked insane stupid, and we just f-d up the water,” said the 2017 New York Pro champion.

Preparing for a bodybuilding competition is a tough process especially when competing against the very best in the world. However, he realizes that having not been on stage consistently has affected his ability to show up in peak form.

But it’s just looking forward from here and making sure to correct those issues.

“It was just one mistake”.

Sergio says he will be doing the Legion in a month and right now his life is the best it’s been. So we should see him competing a lot more and making improvements.

“No matter what this is what I love to do. I love bodybuilding and I would do it if I sucked,” he said.

You can play the video below to hear the full thing.

What do you think about the scorecard situation?