Emotional Sergio Oliva Jr. Says Shawn Rhoden Died Because ‘He Couldn’t Do What He Loved’ 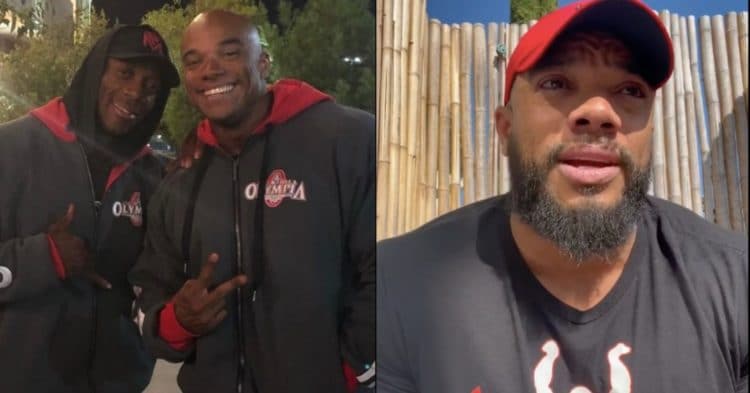 The majority of the bodybuilding world was shocked and upset by the news that Mr. Olympia winner Shawn Rhoden had unexpectedly died at age 46. Sergio Oliva Jr. is taking the news particularly hard, because he feels that this sport killed Rhoden.

Oliva Jr. was friends with and competed alongside Rhoden, even sharing the stage with Flexatron the same year he won the Olympia title. This would also be the last time that Shawn competed, as allegations of sexual assault led to his Pro Card being revoked, while the legal process was never resolved before his untimely passing.

Speaking in an emotional video on his Instagram page, Sergio said that he believes it was the stress of this situation, and his inability to compete, that led to Shawn’s reported heart attack. While it may not have been in the way that some may think, Sergio feels that the sport of bodybuilding is what killed Rhoden.

“People need to know that this wasn’t a suicide. Shawn didn’t die from gear. He’s not getting ready for a show, he’s not taking all these cutters and s—t that would effect his heart. The thing that killed him is this sport. Not the way you think, it’s because he couldn’t do what he loved,” Oliva Jr. said.

“The stress, the constant disappointment, constantly getting his hopes up, getting his dreams toyed with. It just took a toll on him. Couldn’t do what he loved. That’s all he wanted to do. This f—king sport, this f—king lying b—ch, that’s what killed him.”

Sergio Oliva Jr. continued to emotionally explain that he is devastated for the friends and family of Shawn Rhoden, for losing what he considered to be a great man. This is a sentiment that seems to be shared throughout the community, as well.

The one thing that amazes Sergio though, is the fact that Shawn never gave up hope that he would be able to compete again, even after three years of nothing changing. Sergio does not understand why this was the case, and feels that if Shawn moved on he might still be alive.

Related: Flex Lewis Pays Tribute To Late Shawn Rhoden: ‘I Feel This Life Could of Been Saved‘

“He died from his heart, probably, yeah for sure, being broken. So I just wanted to clear the air before people start to say s—t.”

Like a lot of people, Sergio Oliva Jr. was able to benefit from the kindness and generosity of Shawn Rhoden. He specifically said that Shawn had a saying he liked to use as a motto, and it was something that he would tell Sergio whenever something was going on in his life.

“He was always the same person, no matter what. No matter what situation he was in. He had every right, if he wanted to take his life, he could’ve. No one would’ve blamed him. He was probably so lonely at times, and still, you never heard him complain. Never heard him complain. He was never upset, he was just always ready to get back on the boat, and he’s never going to get a chance to clear his name. That’s the worst thing about it…

It is clear that Shawn Rhoden meant a lot to the bodybuilding world, even if things were complicated towards the end of his life. It was hard to see Sergio Oliva Jr. so heartbroken like this, but it likely portrays the emotions of most people who knew Flexatron.