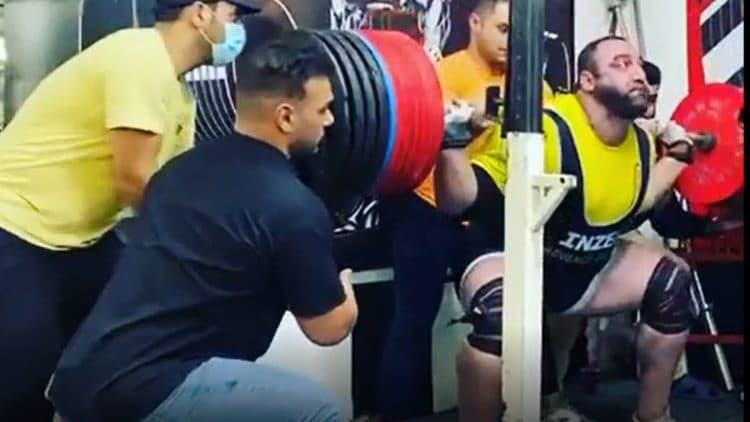 After recently claiming the All-Time Heaviest Squat & Total in Asia, Shahram Saki is back in the training room.   Saki just achieved his most impressive strength record to date. Judging by his posts from the last few weeks and the recent feat of strength, it seems that Shahram is going after the All-Time Squat World Record. Saki is very close to accomplishing what he set out to do, having squatted a colossal 510 kilograms (1,124.4 pounds) in training.

Granted that Shahram Saki did use knee wraps to aid him in the lift, but even as such, his recent lift is 5 kilograms (11 pounds) over the current Squat W/Wraps All-Time World Record. Daniel Bell holds the record, as he squatted 505 kilograms (1,113.3 pounds) at the 2021 WRPF Kern US Open.

Shahram Saki’s exact bodyweight at the time of this lift is unknown, but he competes in the +120-kilogram weight class. Although Shahram’s depth in the 510-kilogram (1,124,4-pound) squat is questionable, his lift is still very impressive. According to the powerlifting standards, the hip crease has to drop down below the top surface of the leg. Judging by this, Shahram’s lift would potentially not count in a competition, but with a bit more training, there is no doubt that he could correct this.

Shahram Saki At A Glance

Stepping into his early thirties, Shahram Saki seems to have just now fully focused on powerlifting. He had his first competition in 2017 and did not compete again for the next four years. In July 2021, Shahram made a comeback, and after training for the past nine months, took part in his third sanctioned powerlifting meet.

As his 510-kilogram (1,124.4-pound) squat suggests, Shahram Saki has made some unfathomable progress in the past few months. So it makes sense that all of his competition PRs have come from his most recent outing.

Shahram Saki has not yet revealed what his next competition will be, but he has been fully focused on the squat in the past few weeks. He could potentially only be looking to break the squat World Record, which he is very capable of. Shahram has conquered the Asian continent. Now the only thing left to do for him is to become the greatest in the world.