Seven-time Mr. Olympia Phil Heath reflects on the mindset necessary to win multiple Mr. Olympia shows, "I Know The Secret To My Own Success". 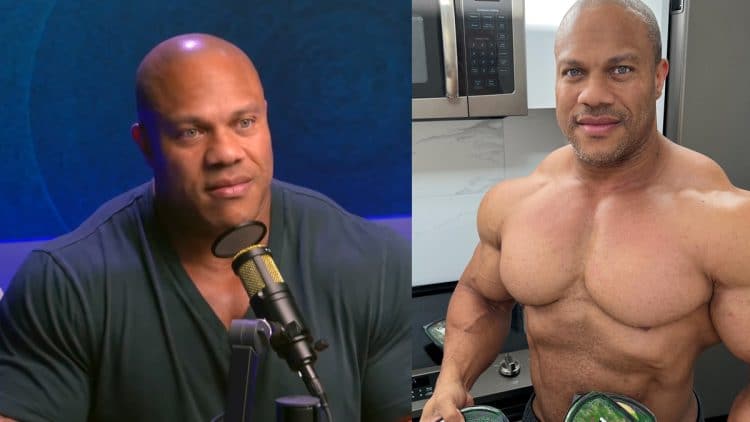 Phil Heath is a legend of the sport and one of the most successful bodybuilders to ever walk the earth. In a recent interview, Heath reflects on the mentality necessary to achieve greatness and touches on the chance of returning to tie Ronnie Coleman’s record of eight Mr. Olympia titles.

As a seven-time winner of Mr. Olympia (2010-2017), there are very few bodybuilders who have reached the pinnacle of the sport like Phil Heath. Phil captured seven titles at the most prestigious show in the world leaving only Lee Haney and Ronnie Coleman with more Sandow trophies to their name (8). In 2018, Phil was dethroned by the late Shawn Rhoden. However, that didn’t stop “The Gift” from competing with the best in the world. He continued to hover around the podium and secured third place at the 2020 Mr. Olympia.

While Phil never announced his retirement, it remains unclear if the decorated champion will return to competition imminently. Due to a previous COVID-19 infection, Heath lost a considerable amount of weight, dropping to 225lbs. Fortunately, it looks like Heath has packed on more muscle mass judging by some of his recent training sessions. Phil is adamant that unwavering confidence can go a long way and maintains that it played a key role in his development en route to becoming an elite-level bodybuilder.

In a recent YouTube interview, Heath underlines how often he had to make tweaks to his physique in order to stay on top of the sport. Brimming with confidence after his first Olympia victory, Phil believed after winning one event, that he could one day win ten of them.

“I had arrived. That’s how I felt. It was all worth it. This is your new start. Because now you’re Mr. Olympia, you’re not these guys. You’ve already beat them. That’s in your rearview and fans may look at that like that’s cocky, no man, I did the work. I know the secret to my own success.

Can I tweak it now? Absolutely. How did Ferrari win all those championships? They tweaked it. Zero to sixty in eight seconds, the first car and they got better and better. I look at that, and say ‘why not me?’ So, I put something out there that was nuts. I’m going to win ten of these damn things. People were like this guy, freakin’ arrogant, a-hole, blah blah. Well, I’m like wait a minute, if your kids tell you, dad, mom, stranger, what do you want to be when you grow up? And they say, doctor, lawyer, entrepreneur, YouTuber whatever, you don’t piss on their parade. So who are you to tell me any different?”  Phil Heath said.

According to Phil, he made the mistake once of aiming for top-3 at the Arnold Classic but admits that his efforts resulted in him placing in fifth.

“Yeah when I did my first Arnold Classic I put it out there that I wanted to be top three. Being top three got me fifth. See, so sometimes, you say I want third. It may not work out like that and you got fifth. See I know, I won’t mention his name, he won one Mr. Olympia and he said, all I wanted to do is win one and that’s all that happened. You sell yourself short, and that’s okay, that’s their dream, whatever. For me, hell no. I looked at it for what it was. I was young enough and I was good enough. I didn’t have any injuries at the time. It was more like why not?”

After an unsatisfactory performance, Phil knew he was young and skilled enough to be the best bodybuilder on the planet. Heath believes many athletes hold themselves back by placing limitations on what they can achieve.

“For sure, it was like, I mean, how can I transform this body into this is crazy. It comes from hard work, discipline, and all that but when I recognized that I could do this better. Again, I talk about video games. The best thing is not just to get, you know I’m like old school arcade games. You go to an arcade, and you’re like I got my name in the game but you’re 10th dude. Don’t you want to be a number one, and that’s how I looked at it. I have an opportunity if I choose to play that game again and just challenge myself. How big can I go. It can be in anything. Literally anything. Just how competitive with myself can I do this, how can I game-ify this?”

Similar to boxing, Phil believed that by neutralizing his opponents’ strength, he would find success as a byproduct.

“To visualize, based on what I previously had done, what I want to improve on. So you mentioned leg days. One of the things I realized, is that I had really good leg development. However, I wanted to maximize it to neutralize another competitor’s leg development.

My mind was thinking like a boxer, this guy has got a great jab man and my jab may not have to be as good as his but I have to be able to move accordingly just to do the counter. If I can neutralize his strength, how is he going to deal with mine? When I’m doing legs, my mindset was you must treat this day better than any other day. This leg day because average person, if I say by raise of hands who wants to train arms with me. Everybody is going to raise their hands. If I say chest. If I say legs, they start squirming. I recognized that I was the same, but I wanted to present a challenge to myself so I did legs twice a week and cardio.”

Many have questioned when Heath will make his anticipated return to Mr. Olympia but the bodybuilding legend tabled the idea, indicating that there is only a 5% chance he actually returns to tie Coleman’s record.

“I’ve liked that last part that you said at some point because that means it doesn’t have to be today. 5%, at some point. Right now, it’s staying at 5%.” Heath added.

With a great legacy intact, it remains unclear if/when Phil Heath will return to a bodybuilding show. Despite speculation given his growing physique, Heath’s desire to compete is low judging by the recent interview.