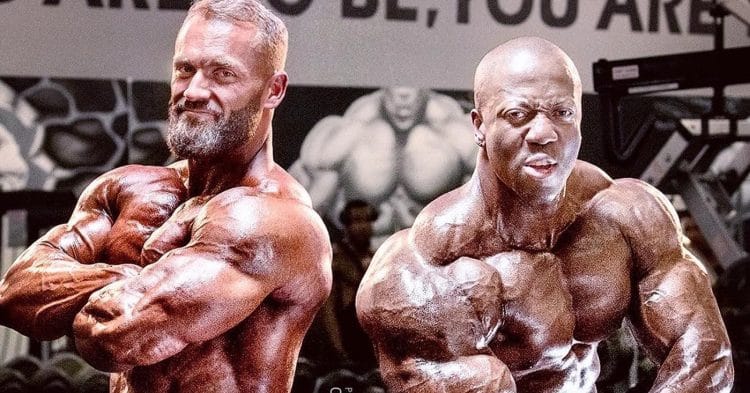 IFBB Pro bodybuilder Stanimal De Longeaux recently shared some lesser-known details about the events that led to late Shawn Rhoden’s untimely death last year. The bodybuilding world was shocked by the news of Shawn Rhoden’s passing on November 6th, 2021 due to a heart attack. Rhoden was a perennial contender in the Open Pro division and won the prestigious Mr. Olympia title in 2018 to end Phil Heath’s seven-time Olympia winning streak. The last couple of years of Rhoden’s life saw him fight to clear his name from an infamous case. However, his contribution to the sport is undeniable.

Stan De Longeaux is one of Shawn Rhoden’s close friends and training partners and he was privy to some details that only Rhoden’s close circle was aware of. During his recent visit to The Menace Podcast on the Muscle And Fitness YouTube channel, Stan spoke about Shawn Rhoden’s recent medical history and events that led to his unfortunate death.

Stan affirmed that Shawn Rhoden had suffered two prior heart attacks before the fatal attack that claimed his life. He also stated that Rhoden had kept it a secret and Stan was one of the few people privy to this information. During Stan’s move to Chicago from Los Angeles, Shawn Rhoden probably suffered a heart attack. However, he was not aware of it at the time, and during his stay at the hospital after the second heart attack, the doctors speculated that the previous one might have been a minor heart attack.

“The night before we were supposed to have dinner, he was on his way and he didn’t feel good.”

“He had hard time breathing and getting weak. But later on when he actually had a case, a second heart attack and he ended up in hospital… when they asked him did you have prior episodes or stuff like that… he did mention this case. They were like yeah…  That was like… first small heart attack.”

Stan De Longeaux added that the doctors were monitoring Shawn Rhoden after the second heart attack. They advised Rhoden to ‘dump some blood every 56 days, which probably means blood transfusion. According to Stan, Rhoden recovered well and looked healthy until the fatal heart attack took him.

“I don’t know what his doctors told him precisely, but he was getting monitored and he was good until like…” Stan De Longeaux continued.

Stan’s opinion on steroid use and Rhoden’s passing

Steroids are an integral part of competitive bodybuilding and it is nearly impossible for anyone not using them to reach the absolute top of the sport. A lot of health issues that bodybuilders face are attributed to the rampant use of steroids and other performance enhancers. Unsurprisingly, steroids use was speculated to be a contributing factor in Shawn Rhoden’s case.

However, Stan De Longeaux claimed that Rhoden was definitely not over-using steroids. He further claimed that the late bodybuilder had barely taken them in a couple of years before his death. Stan said:

“Well, that’s the main thing. So we can address the elephant in the room. It’s like a lot of people say, ‘oh, he keeps getting on gear.’ He was not on gear. Since 2019 he barely had a couple of shots here and there.”

“Shawn was… the worst was that he was not persistent, he was always missing shots even when he was on prep for the Olympia. There was never a guy who abused anything.”

“I’m not saying that steroids didn’t cause anything. I think the effect of steroids helping him get big and heavy has a strain on his heart but it was not like the abuse of it.”

Stan De Longeaux’s claims about Shawn Rhoden’s limited use of steroids cannot be denied. However, every individual’s body responds to substances in a different manner. While some may get away with massive steroid abuse, others can experience the negative effects even with limited use. Therefore steroids can very well be a contributing factor in Shawn Rhoden’s unfortunate death.

Continuing further on the topic, Stan claimed that Shawn Rhoden was taking necessary care after a heart attack but he did not feel familiar symptoms before the fatal heart attack. He believes that could have caused him to not seek medical help in time.

While Shawn Rhoden’s reluctance to seek frequent medical help might come as a surprise to many, Stan claimed that a past experience had permanently altered Rhoden’s perception of a hospital. Stan De Longeaux revealed:

“Shawn was like very afraid of the hospitals because that’s you know, his dad was never sick for a day of his life. One time he ended up in hospital… when he ended up in the hospital, they told him he’s gonna die within six months! So (Shawn Rhoden) was always scared of hospital. That’s kind of stupid but that’s (because) he was afraid of that.”

However, Stan opined that if Shawn Rhoden was not afraid of visiting hospitals, the doctors would probably have addressed the situation in time and saved him before it was too late. Unfortunately, we can only wish that it had never happened. Stan De Longeaux stated that he has become more aware and cautious about his health due to Shawn Rhoden’s passing and that should count for something.

Courtesy of the Muscle And Fitness YouTube channel, you can watch the full video of Stan De Longeaux’s visit to The Menace Podcast here: