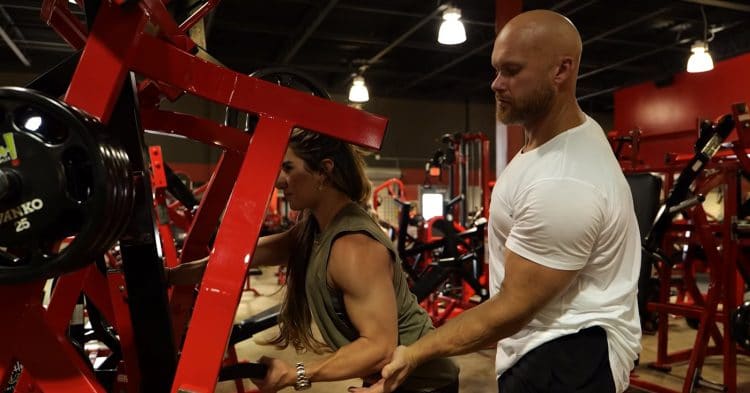 We most recently shared the daily nutritional regime of world record-holding powerlifter Stefi Cohen. And as you’d probably guess, she has to eat a lot to maintain her superhuman strength and incredible physique.

But even more recently, Cohen posted a few videos of her training with IFBB Pro bodybuilder Ben Pakulski to improve upon her physique and learn more about hypertrophy (muscle growth).

Now, powerlifters and bodybuilders often use the same exercises/equipment but their goals are generally much different. The main focus of a powerlifter is to lift maximum poundages and therefore, they train using low rep ranges without much concern about feeling the contraction and stretch in a muscle.

Bodybuilders, on the other hand, are more focused on maximizing muscular contractions, stretching the muscle under loads, and time under tension to break down muscle tissue. This stimulates a repair response and the muscles grow back bigger with strategic nutrition, sleep, etc. Their rep ranges can vary from low to high.

That doesn’t mean a powerlifter can’t have a muscular, lean physique or that a bodybuilder can’t be really strong. In fact many times this is the case, not to mention, they’ll use rep ranges completely outside of what they typically utilize. But they’re most definitely not one and the same for the most part.

But anyway, let’s get into Stefi Cohen’s recent training session where she utilized 3-rep sets under the guidance of Ben Pakulski because apparently, this is a super-effective method to gain size faster.

So the video started off with Pakulski giving Cohen some lat training instruction and correcting her form, as they performed a straight-arm pushdown on the cable machine. She explained that learning how to maximize muscle contractions was very challenging and it exposed some deficits that she never thought of before.

The key points for this exercise were to keep more upright, not overstretch the arms and allow them to come too far up, and pull down, not back, to fully stimulate the lats.

They moved onto the standing machine row where Pakulski guided Cohen throughout the entire movement of which he was very strategic about how it should be executed. Essentially, she had to maintain a very rigid position, keep her shoulders down, and really focus on the contraction in the lats. Then, she was instructed to extend the arms forward to get an optimal stretch in the lats during the negatives.

Pakulski explained that it was more of a down movement than a back movement which allows for a better contraction in the target area.

Cohen definitely noticed a big difference as if she never felt her muscles working as they were with this exercise, even saying, “That’s crazy” at one point. She didn’t even realize that she had just completed a 3-rep set… “it felt like I did 20“. But it makes total sense seeing as how slow and methodical she had to be for this movement and was definitely distracted by this.

“It’s true though people always asking for number of reps and tempos and shit, it’s like first let’s contract this thing through an entire rep and then eventually three reps, and then an entire set. Progressive is f-ing tremendous. Not having to worry about tempos and periodization and nobody is at that point, very few people.”

The next form tip was to load the weight through the heel by stabilizing the same side foot as the working arm on the ground. This really activates the glutes which in turn, will allow for a better lat contraction. Cohen felt the movement a lot in her bicep so Pakulski had her stand closer to the machine and more upright to reduce the amount of leaning forward and elbow flexion which would solve that issue.

Stefi Cohen really learned how to maximize the muscle/mind connection during this training session.

“Three reps is hard and crazy, I have to focus so much because I really want to do it the lazy way and use the muscles that I usually use which are not the right ones. I already feel it, my lats are already sore,” she explained.

Next was the vertical machine row where Cohen was given more tips about how to effectively train the lats. And both of the previous movements were actually applied to this exercise. So she started off by positioning herself to achieve an optimal range of motion and then Pakulski made sure she was good to go.

The ideal way to perform this exercise is squeeze the knees together to keep the hips tight, lean your upper body slightly back and pull down but not back and in. This allows you to pull in the direction of the muscle fibers. The upper body should not move from the original position.

They hopped over to another machine where Pakulski pointed out that he thinks Cohen has a weaker serratus muscle (helps to rotate or move the shoulder blade forward and up) on her left side which is affecting her performance on that side.

For the last back exercise, Pakulski suggested Cohen lift some heavy weight (which is what she does best) as he explained that he thinks there’s some utility in doing some metabolic stimulus to the muscle which creates a good balance along with their hypertrophy-focused movements.

So, they threw some weight on the horizontal row machine and she did her thing. But it wasn’t without some constructive criticism which is what she was there for, after all. Pakulski recommended she grab lower on the grip to activate more of the lats rather than focusing on pulling more with the forearm flexors and biceps.

For shoulders, Cohen did some dumbbell side raises which is one of the best isolation exercises for the lateral or middle head of the deltoids. And again, Pakulski chimed and from what it sounded like, he said, “I really don’t love the way you’re doing this“.

He proceeded to hand her lighter dumbbells and helped her to correct her form. So she performed the reps and looked pretty good but when he offered more instruction, she jokingly said, “you can never please this guy“.

He then gave some valuable tips for working the muscles in the direction of the lateral deltoid fibers.

But that wrapped up the session and it seemed very productive and insightful for not only Stefi Cohen but for anyone watching as well. Cohen mentioned that she’ll be training with Pakulski in about a month, whether she meets up with him in Tampa, or whether he comes down to Miami to train with her.