Life and Accomplishments of Ariel Khadr 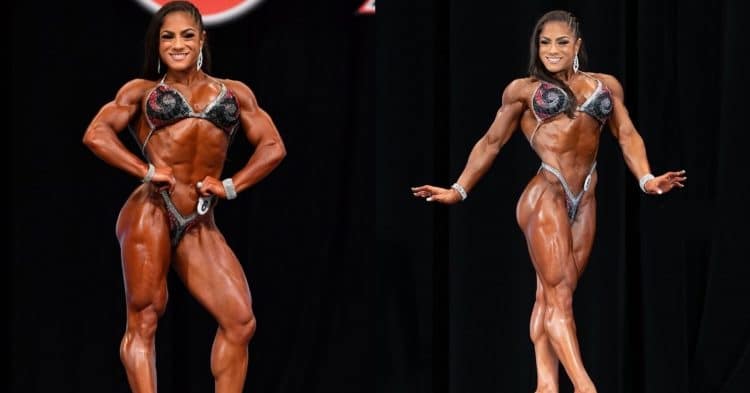 Ariel Khadr is an IFBB Pro Fitness competitor and model. This is the story of how she went from a young and aspiring gymnast to one of the most promising athletes on the Olympia stage.

Born an only child, Ariel Khadr had parents that taught her the importance of discipline and hard work at an early age. This translated perfectly when she started to train in gymnastics at the age of 11.

This was something that came naturally to her, even leading her into the world of martial arts, where she got her black belt in Taekwondo. In addition to that, she was able to earn a place on the gymnastics team for Rutgers University in New Jersey, where she attended on a scholarship.

Before she went off to college though, Khadr decided to try her hand at a different sport: bodybuilding. Initially competing in a Figure competition, Ariel quickly realized that her skillset was better suited for Figure competition.

The first time that Ariel competed, she won a local Figure competition. However when she realized that her calling was in Fitness, she quickly found success here too.

In fact, Ariel Khadr went on to win the 2009 NPC Team Universe Fitness competition at just 17 years old, earning her IFBB Pro Card. This made her the youngest person in IFBB Pro history to qualify for pro competition.

Despite this high level of success, Ariel actually took some time away from the stage, to pursue her first love with gymnastics. She used that scholarship to go to college, trying to get the most out of her skills.

Unfortunately injuries began to pile up, and Khadr found herself unable to keep up with the high physical demands of competition. So at 19 years old, she called an end to her endeavors in this sport, and refocused on Fitness competition.

After her career in gymnastics ended, Ariel Khadr decided to return to the bodybuilding stage, and make her pro Fitness debut at the 2015 Europa Phoenix Pro. She hardly missed a beat too, as she came in third place at this show.

Ariel followed this up with a win the following year, at the 2016 Toronto Pro. This opened the door for her to compete for the first time at the Olympia, where she landed in the seventh place position in the Fitness Division.

Khadr would continue earning invitations to the Olympia, returning in 2017 and 2018. She came in seventh place in both of these years as well.

However she would not be deterred, and decided to take a year off from competing to better sculpt her physique. She came back in a big way in 2020, coming in second at the Fitness International and winning the Tampa Pro, before scoring a much improved fourth place at the Olympia.

When it comes to her training, Ariel Khadr likes to blend both traditional fitness training, with that of her gymnastic routes. This leads to her finding increased flexibility, conditioning, and strength, while sculpting a good package for the stage.

Ariel trains gymnastics around five days a week, with 45-60 minute cardio sessions at the end of each 3-hour long training. She also weight trains thrice weekly, splitting legs, shoulders, and upper body workouts throughout those sessions.

As for her favorite body part to train, Khadr loves to work the back, doing supersets twice a week. One of those sessions uses lighter weights, while the other includes heavier weights.

“My training philosophy is BE CONSISTENT and like what you are doing. You can never achieve what you want if you don’t enjoy it,” she says.

Below are some of Ariel Khadr’s favorite back workouts:

Additionally, Ariel Khadr includes ab workouts with each of he training sessions, so that she maintains a toned core. This is her favorite shoulder and abs combo workout:

Nutrition is something that Ariel Khadr takes with the upmost seriousness, naming it the most important attribute in someone’s fitness journey. She says that having a strict and consistent diet is paramount to success in any athletic endeavor.

“I believe that diet is almost everything when it comes to pursuing your goals. I’m always on top of my diet, and only allow myself a ‘cheat meal’ once a week. It might sound crazy for a teen to have the ability to always eat clean. But, my parents are both bodybuilders and they eat the same foods I do,” she says.

In fact, Khadr noted that the hardest thing about her fitness journey was cutting down on the cheat meals, and keeping herself consistent. However once she figured that out, the evidence of it working was clear.

Even during the offseason, Ariel keeps clean diet and rarely strays from what she eats. These are the foods that she tends to eat the most, although they fluctuate based on what her needs are at the time:

There are few words to describe Ariel Khadr and her rapid rise to success, other than calling her something of a phenom. She is still young and has a bright future ahead of her, to fully realize that potential.

Beginning her fitness journey at a young age, she has grown into one of the best Fitness athletes in the world today. It will be worth watching to see how the rest of her career unfolds.