Following the 2020 Mr. Olympia, the sport's biggest athletes have been reacting to their performances at the show 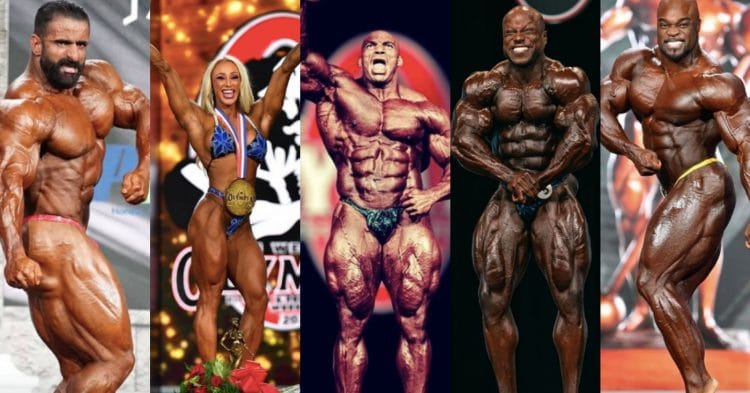 The 2020 Mr. Olympia took place December 17-20th in Orlando, Florida. Big Ramy crowned 2020 Mr. Olympia and earned prize money of $400,000. Following the contest, several of the sport’s biggest athletes have reacted to their various placements at the contest.

The 2020 Mr. Olympia promised to be a one of a kind experience, and it delivered on that promise. The best bodybuilders in the world took the stage to prove themselves, and over the course of the weekend, we saw some incredible action. There were some upsets and surprises, as well as crazy comebacks and results that were expected. In the end, it was one of the better Olympias in some time, with interesting storylines unfolding throughout.

Now that the athletes have had time to reflect on the contest and digest everything that transpired, a lot of them have reacted to their performances. Today we take a look at some of the biggest athletes who competed at the 2020 Mr. Oylmpia, as they discuss what happened over the weekend.

2019 Mr. Olympia champ Brandon Curry came in this year’s Olympia looking better than he did when he won the title last year. The only problem with that, is Big Ramy also looked better than ever, and was able to win this year’s contest over Brandon. Following his solid second place performance, Brandon took to his Instagram to thank his fans for the support, and show that he was keeping a positive mindset about the contest.

“There is still victory, even in defeat.

Mission accomplished in more than 1 way. My coach @abdullah_fs_alotaibi and I gave it everything we had and were able to bring a completely brand new package. I made every sacrifice required of me to be at my all time best and I have peace with that…we can only control the things that we are given control over…and although what I brought wasn’t good enough to retain the title as Mr. Olympia 2020, once a Mr. Olympia, always a Mr. Olympia. 🏆

This one will go down in the history books!

In the words of the great @schwarzenegger “I’ll be BACK!”

Chris Bumstead was looking to retain his title of Classic Physique Olympia champ, after winning in 2019. He had a lot of steep competition in his way however, not least of which was former champ and bitter rival Breon Ansley. In the end, he would secure his second straight win in the Olympia, and posted after the fact to reflect on his rivalry with Breon, and actually show respect to the man who came in third.

“It’s no secret rivalry makes things a bit fair more exciting. That’s not just for the fans, but for competitors as well.
This man puts in the work and shows up on the money every damn time and while I was extremely focused on just myself this past year, there is no doubt I didn’t know he was busting his ass to take that title back from me. I appreciate your relentless battle and hope we get to do it again @breonma_🙏🏼”

The man Bumstead was talking to, former two-time Olympia champ Breon Ansley, showed his appreciation for the respect shown by his rival. He also posted to his own Instagram with a video to reflect on the contest. Here he made it clear that he would be going nowhere, despite rumors that he may move back up to 212, and that he will be back again next year, even better than before.

“Of course guys, what happened after last night, I’m very disappointed,” Ansley said. “It wasn’t the outcome that we worked so hard for…We will be back. We will be back next year, strong. Guys, I promise you that. There could have been some things that I could have changed this prep and I’m confident in that. I’m confident that I can still bring a winning physique, winning package, winning Classic Physique to the stage, and that it can be one thousand percent this time.

“So hats off to Chris, hats off to Terrence (Ruffin),” Ansley said. “They’re great competitors, great champions. We will just take our third place, learn from it, rest a little bit, and get back to the drawing board.”

Coming into the 2020 Mr. Olympia, there was hype around Big Ramy’s appearance and special invitation to compete, but few expected him to look the way he did. All around he came in sharp and conditioned, and looked better than he ever had before, leading to him being crowned the 16th Olympia champ. Following his performance, he shared a brief message that still managed to show how much this moment meant to him.

Coming in fourth place, many people felt that Iranian bodybuilder Hadi Choopan deserved to even beat Phil Heath. In the end he did not, but he is still happy with the way he performed at the Olympia. Posting to Instagram, he took a second to thank everyone involved in making this contest happen through the global pandemic, while expressing how difficult it was for him to make it in order to compete.

“Thanks for all people who managed and performed Mr Olympia 2020 event. It was not easy at all with covid 19 pandamic.

Thanks to all of my opponents to give me this opportunity to compete with them.

Thanks to US authority who gave me this chance to present in competition.

Sepciall thanks to @ad_supplementsMr saif and Mr khaled for their hospitality in UAE.

And finally I would like to thanks all of fans around the world who supported and encouraged me. I will promise to do better in future hopefully.”

Coming in fifth place at the 2020 Mr. Olympia, William Bonac looked as good as ever, but just was not able to break through the super steep competition in the top four. After the fact, he assured fans that this would not be the last time they saw him, and that he would return to the big stage soon. Moreover he congratulated Ramy on his impressive win.

“I ain’t giving up, this was my seventh time competing at the Mr @mrolympiallc I’m coming back each year until I reach the ultimate top.
Fall seven times & stand up eight

Congratulations to our new Mr O @big_ramy
Patience is bitter but it’s fruits is sweeter than honey.🍯
Always put your faith in Gods hands and not in someone else hands.🏆”

After winning the Men’s Physique Olympia in 2018, Brandon Hendrickson was disappointed about failing to retain this throne last year. So he showed up to the 2020 Mr. Olympia with a chip on his shoulder, and that paid off as he regained the title by the end of the weekend. Posting after the contest, he explained the insane emotions he felt when it was announced that he won.

“WE did it!! I say “we” because I definitely didn’t do this alone! Thank you to all who have been apart of this journey..thank you for all the messages and comments that helped motivate and push me to keep going harder..Last night, after they announced my name as the winner, for the first time I was actually speechless lol I didn’t know what to feel or what to even say haha it was such a surreal moment for me..like me?!? And again?! Wow😳 I can say I’m a 2X men’s physique OLYMPIA champion! “

Heading into the 2020 Mr. Olympia, few expected to see Shaun Clairda in the top position of the 212 division. However he looked unstoppable on stage, and was able to dethrone 2019 champ Kamal Elgargni to win the competition. Speaking on Instagram after the fact, the new champ explained how good it felt to win the biggest contest in the world, while competing in his 50th show.

This wasn’t just the 21 weeks of prep for this one show but 16 years of not only hard work, consistency & dedication but having absolute belief that one day I could make my dream a reality & today was that day!

What made this victory even sweeter was that it was my 50th show I’ve done in my entire bodybuilding career. Couldn’t ask for a better way to celebrate a milestone.”

Classic Physique Olympia runner-up Terrence Ruffin looked the best we had ever seen him, on stage this year. While he was not quite good enough to beat Chris Bumstead, he did beat former Champ Breon Ansley, which was a big feather in his cap. After the contest, he spoke highly of the champ, while assuring Chris that he was coming for the throne next year.

“I’m gonna be making a few posts today but I wanted to first share my thoughts on my placing and the current champ @cbum
So going back to October 2016 where me and Chris first met and competed together I remember him asking to do this shot on stage. Lol I told him nah let’s do an abs and thigh instead (I wasn’t confident in that shot and I was like that’s a big mofo lol). Little did I know I wouldn’t get an opportunity to stand next to him again until 4 years later.
This time around I enjoyed every single moment of being up there and battling it out with the best in the world.
Chris is a class act, a friend & totally deserving of the title. Brother, is going to be a privilege to add some pressure to your prep next year and everyone coming for top your going to be waiting a while 💯.”

Shanique Grant won the 2018 and 2019 Women’s Physique title came in second at 2020 Mr. Olympia. She lost by 1 point to Sarah Villegas. Many fans felt she was the deserving winner. See below what she says about her loss.

Winning the 2020 Fitness Olympia, Missy Truscott easily established herself as the best in the world. She blew the doors off of the competition, and reached some new heights in her career. After the contest, she spoke on how much this meant to her considering this was her dream since she was 17 years old.

“GOD is good! 🙏🏻🥰
As the weekend comes to an end and the emotions are starting to set in I am feeling beyond blessed to have been titled the new Ms. Fitness Olympia! This has been a goal of mine since I start lifting at 17 years old. 💫”

What was your favorite performance from the 2020 Mr. Olympia?