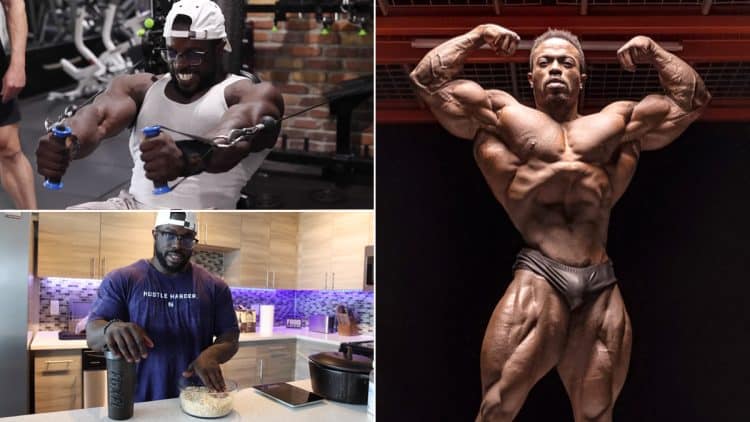 IFBB Pro bodybuilder and Classic Physique competitor Terrence Ruffin recently shared a crushing upper body workout along with his pre-workout and post-workout meals. Ruffin is one of the foremost competitors in the Classic Physique division. His resume includes second-place finishes at the 2020 and 2021 Olympia and first-place finishes at the 2021 and 2022 Arnold Classic.

Ruffin last competed at the 2022 Arnold Classic that took place from March 3rd to 5th in Columbus, Ohio. It was the first major pro show of the year, and winning the contest has earned Ruffin a lot of momentum to prepare for the Olympia scheduled for later this year. His off-season training has been going on at a good pace. Recently, the 28-year-old shared a demanding chest, triceps, and shoulder workout on his YouTube channel and gave his fans a sneak peek into his meals.

Ruffin started the video with his pre-workout meal, which consisted of:

Terrence Ruffin joined hands with Canadian IFBB Pro bodybuilder Cody Drobot for this training session. Drobot could not train for a long time and was three weeks out of the 2022 IFBB Tampa Pro at the time of shooting the video. The show marked his Pro bodybuilding debut in the 212 division.

Upon arrival at the gym, Terrence Ruffin made an intra-workout drink. It included BCAA, EAA, and pre-workout to keep him going through the grueling session.

“With a normal dumbbell or barbell, it pretty much loses the advantage (before you fully extend your arms out), and it’s basically taking tension off. But (the converging chest press machine) has tension all the way to the top. So just to really have that idea of finishing, keep your focus on your upper arm and (when) your bicep is just kind of really driving into the side of your chest.”

Terrence Ruffin and Cody Drobot performed the sets in a slow and steady motion and then moved on to the next exercise.

The duo worked the upper chest muscles next with seated chest flyes on a cable machine. Unlike free weights, cable machines allow better control of the weights and keep the muscles under tension throughout the range of motion for the particular movement.

Terrence Ruffin performed the seated chest flyes with slow reps and wrapped up the chest exercises.

Ruffin and Drobot moved on to the shoulder exercises next and performed shoulder presses on the Nautilus shoulder press machine. The machine is designed to guide the trajectory of arm movement throughout the range of motion to work the arms and shoulders. As a result, the chances of injury due to a lack of control over weights are significantly reduced.

The bodybuilder duo mixed the shoulder workout with triceps and squeezed the triceps extension in between two shoulder movements. They performed the exercise with D-handles.

(Note: The reps and sets were not revealed in the video.)

Terrence Ruffins concluded the video after showing his post-workout meal, which consisted of:

When asked if there was a specific reason for consuming rice crisp cereal instead of cream of rice in the post-workout meal, Ruffin stated that convenience was the only reason.

Additionally, the 28-year-old stated that consuming fast digesting proteins like whey is better around workout time. It helps a lot, especially if you consume a lot of food throughout the day.

By the time the video came out, 2022 Tampa Pro was in the books. Cody Drobot had a strong showing at the event as he secured a fourth-place finish in the 212 division behind Keone Pearson (winner), Kerrith Bajjo, and Nathan Epler.

Meanwhile, Terrence Ruffin is going strong with the 2022 Arnold Classic Physique win under his belt. However, the competition is fierce at the top, and he has to compete against the reigning Classic Physique Olympia champion Chris Bumstead and other top competitors when Olympia returns to Las Vegas in December. Looking at Ruffin’s dedication to his craft, he is all set to give other competitors a tough time. Bringing home the Olympia Classic Physique crown is also not out of the realm of reality for Ruffin.