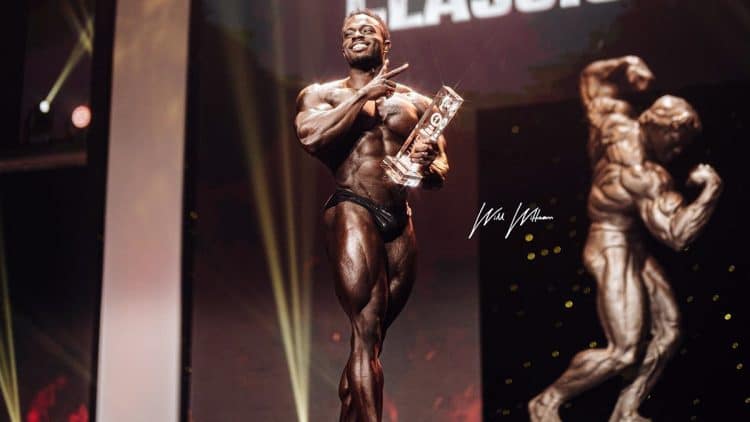 Since the roster included the two to fifth-place finishers of the 2021 Classic Physique Olympia, bodybuilding fans were expecting a heated contest for the 2022 AC Classic Physique throne — and a heated contest they got. Terrence Ruffin, Breon Ansley, Urs Kalecinski, and Ramon Rocha Queirozwere were in the first callout. The first callout had made it pretty evident that Terrence Ruffin was leading the pack.

The 2022 AC is scheduled for March 3-6, 2022, at Battelle Grand Ballroom of the Greater Columbus Convention Center in Columbus, OH. The Classic Physique show took place on Mar. 4, 2022.

The Arnold Sports Festival management had upped the ante by raising the prize money for the winner of the Classic Physique division from $7,000 in 2021 to $60,000 in 2022. For comparison, Chris Bumstead was awarded $50,000 for winning the 2021 Classic Physique Olympia.

Since the Arnold Classic is considered the second biggest bodybuilding show behind the Olympia, Terrence Ruffin will be viewed as Chris Bumstead’s number one challenger for the 2022 Classic Physique Olympia throne. The 2022 Olympia is scheduled for Dec. 16-18 in Las Vegas, NV.

Terrence Ruffin is the AC Classic Physique defending champion. “Ruff Diesel” was also the runner-up behind CBum at the 2021 Mr. O showdown and was one of the favorites going into 2022 AC.

The defending champ had solid competition from the 2018 Arnold Classic and 2X Classic Physique Olympia champion (2017 and 2018) Breon Ansley. Ansley won the inaugural AC Classic Physique title in 2018 and looked hungry for his second AC title win the moment he stepped on stage.

To add to the drama, the pre-judging round for Classic Physique was relatively short and had only three callouts. Interestingly, the final callout did not involve any shifting of athletes. It could either have meant that the judges had already made up their minds or they were spicing things up for the finals.

Ruffin successfully defended his AC throne at the 2022 showdown and has made history by becoming the only bodybuilder to have won two Arnold Classic Classic Physique trophies.

Terrence looked in total control from the moment he walked on stage. Even though Ruffin is one of the shorter athletes on the roster, he has one of the widest backs, which makes him stand out. Ruffin knows bodybuilding shows are won from the back, and his back happens to be his strongest suit.

Terrence Ruffin kicked off the individual posing routine and looked magical in every pose. It is no secret that he is one of the best posers in the bodybuilding industry, and he knows how to make the most of his posing skills.

Ruff Diesel’s V-taper is one of the biggest reasons behind his success. His cobra back has a life of its own and bites his opponents out of the competition.

Queirozwere is arguably the most muscular and thick Classic Physique bodybuilder. He arguably had the best conditioning on stage. The moment he stepped on stage, it looked like he would give the two Arnold Classic champs on the roster a serious fight for the gold. His upper chest striations made him stand out against his competition. He also had a height advantage over his competition.

One of the biggest drawbacks for Ramon was that he started sweating during callouts. Due to the heavy sweating on his back, his tan went for a toss which messed up his conditioning. However, he came back with a new tan in the finals for his posing routine and secured his runner-up finish.

Unlike his Classic Physique peers, Kalecinski kept his physique under the wraps during the 2022 AC prep. We got a look at his physique in its full glory on the stage for the first time after the 2021 Olympia where he finished fourth — commendable for his debut Olympia showdown.

The 23-year old gave Ansley a run for his money in the legs department and has one of the best abdomens in the Classic Physique division. It was the German’s debut Arnold Classic USA.

Arnold was in the commentary box when Urs came out to pose. The Governator complemented his posing but suggested he build more mass in his upper body to improve his ranking.

Ansley hands arguably had the best legs on the Classic Physique stage and he knew it. He did not spare a chance to show off his legs and abdomen.

Right out the gates, he looked bang on the money. His posing and conditioning had improved by leaps and bounds since the 2021 Olympia showdown. All the work with the bodybuilding legend Chris Cormier had seemed to pay off.

Michael Daboul had one of the best conditioning on the AC stage which earned him his fifth-place finish.

Peter has great arms and has one of the best side chest poses of the bunch. The Hungarian bodybuilder had been pulling a lot of eyeballs on social media leading up to the 2022 Arnold Classic.

It was no surprise that Terrence Ruffin won the Best Poser award at the 2022 AC Classic Physique.

Check out the 2022 Arnold Classic Results For All Divisions.

The Classic Physique 2022 was a close-fought battle and kept the bodybuilding fans at the edge of their seats.

Kalecinski and Queiroz entered the AC weekend as two competitors that would be battling for third and fourth place but that quickly changed as soon as the newcomers stepped on stage.

Do you agree with the AC 2022 Classic Physique results? Who do you think should have won the title? Let us know by tagging us on social media and in the comments below.

The 2022 VanCity Showdown show took place this weekend October 1, 2022. The show was located in Burnaby, Canada and served...