The incredible pull was achieved by Terry Hollands after just four deadlift sessions. 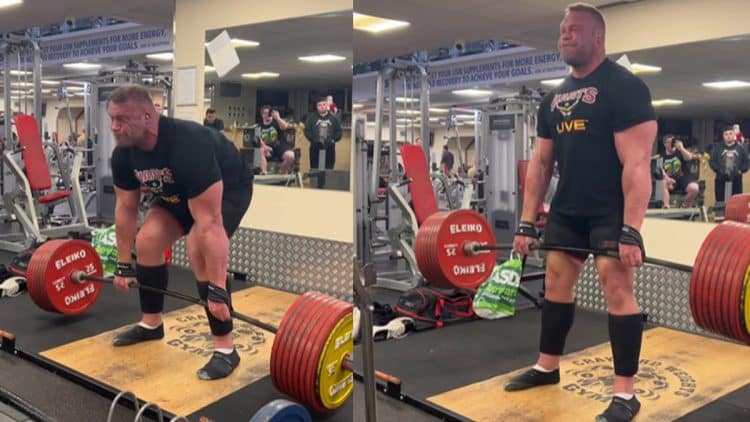 Terry Hollands is one of the most successful Strongman athletes in history, who, despite retiring more than one year ago, has decided to make a comeback to the sport. Furthermore, he is coming out from retirement to compete at the 2023 Britain’s Strongest Man contest, which will take place on January 26th, 2023, in Sheffield. He is already back to performing some mind-blowing lifts, with the most impressive accomplishment being his recent deadlift of 400 kilograms (881.8 pounds).

This impressive feat is one of the greatest milestones in Strongman, as every athlete strives to achieve it. Terry Hollands is even prouder of the fact that he accomplished it in just four deadlift sessions throughout the year. This achievement is made all the more impressive by the limited number of sessions it took. It is worth noting that Hollands used lifting straps and a lifting belt to complete the lift. It is possible that he also used a deadlift suit, though this is not clear from the video as he was wearing a t-shirt and shorts. The stance with which he performed the lift was conventional. Despite this, all of the methods and techniques employed by Terry Hollands are within the rules and regulations of the sport of Strongman.

Terry Hollands is determined to be at his best when he competes in Britain’s Strongest Man contest, and he states that he will need to be at 90% of his peak career performance to be competitive. That does not pose a problem for him, since he is getting better with every training session.

“I said when I was going to compete again I need to pull 400kg by the end of the year.

4 deadlift sessions in a whole year and back to 400 is good progress.”

Terry Hollands has always been incredible in the deadlift event, having pulled over 400 kilograms (881.8 pounds) on multiple occasions throughout his career. However, the recent deadlift is more special than any before, since it marks his quick improvement. Terry’s goal is to perform the best he can, as his son will be witnessing him compete for the first time since he is now 7-years-old.

Terry Hollands has had one of the most incredible Strongman careers, as he competed in 101 International and National competitions since making his debut in 2005. He has finished in the top 10 nine separate times at the World’s Strongest Man contest, with his greatest result being third place in 2011. Hollands has also won five shows throughout his career, one of them being the 2007 Britain’s Strongest Man.

Despite retiring from Strongman, Terry Hollands has not shied away from other strength sports, as he went through an incredible body transformation and took part in some bodybuilding shows. However, having won Britain’s Strongest Man contest once already, Terry could not hold back from trying to reclaim the title once more.