The two-time World's Strongest Man bronze medalist has lost a considerable amount of weight on his journey to becoming a bodybuilder, "Safe to say we made some good changes". 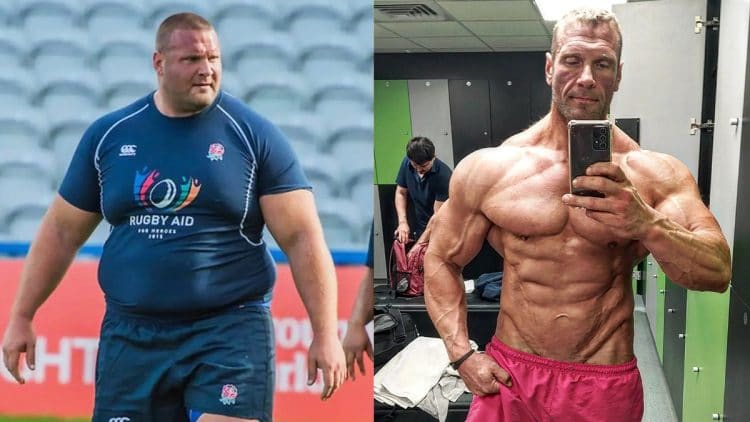 Strength athlete Terry Hollands has made a name for himself in strongman but is focusing his efforts solely on bodybuilding as of late. Hollands revealed his return to competitive bodybuilding will take place at the Fit X Insight Supps contest in Leeds, England.

Terry Hollands is a decorated strongman athlete known for pushing the bounds of human strength. His consistency is marveled, and his accolades are among some of the best in the sport. During his time competing as a strongman, he held the English Strongest Man, UK’s Strongest Man, and Britain’s Strongest Man titles. In 2021, Hollands made it the 2021 WSM contest, but would, unfortunately, suffer an injury as a result of Event 1 forcing his withdrawal. Following the undisclosed injury, Terry opted to retire from WSM competitions.

Focusing his efforts on bodybuilding, and modifying his physique, Terry has applied the same ambitions that he had as a strongman to his new craft. He competed at his first bodybuilding show in 2019 earning first place in the Beginners category, second in the Masters’ category, and finished second in the Open Super Heavyweight category as well. The impressive performance qualified Hollands for the 2brospro British Finals, but decided not to compete due to other commitments. Terry shared his dramatic physique transformation from earlier this year and it’s evident that he’s addressing prep in a methodical manner.

Terry Hollands Determined to Make Statement at Next Show:  ‘I Always Want To Be Better’

In a recent post made on Instagram, Terry Hollands revealed some of the improvements he’s made to his physique one week into prep for the upcoming Fit X bodybuilding event in London.

“#transformationtuesday 1 week into prep to now.

Safe to say we made some good changes.

I’m not satisfied with the look I’m bringing as I will always want to be better but I’m happy with where we got in the time frame we had but we keep moving after these 2 shows” Terry Hollands posted.

Hollands’ weight has been up and down as a professional strength sports athlete. At one point during his strongman tenure, he was weighed 447.5 lbs. After steady dieting and training, he has lost a massive amount of weight. In addition, judging by his recent physique updates, his abs have come up a ton too. Terry has kept fans on the pulse as to how he plans to approach his prep during his current bodybuilding season.

Terry Shares Prep Diet and Training Ahead of Bodybuilding Return

Documenting his return to bodybuilding, Terry said his diet is ‘quite boring’. He ingests two meals by 9 a.m. For breakfast, the former strongman star eats whey, oats first, and then chicken, and broccoli with rice for his second meal. Staying committed to meal prep is essential for Terry in maintaining a ripped physique because it enables him to track his ability to diet with fewer hurdles present when preparing and/or weighing food.

Committed to excellence, Terry is focused on maintaining healthy choices to facilitate his return to the stage and is ‘not eating for enjoyment’. Hollands adjusts macros as needed and says that his second meal was made up of 180 grams of grilled chicken breast, 200 grams of rice, and a handful of broccoli stalks (50 grams approx.). If he’s feeling hungry, Terry consumes vegetables because of their caloric values and nutritional value.

Courtesy of his YouTube video, Terry mentioned that his diet consisted of 335 grams of protein, 200 grams of carbohydrates, and 90 grams of fat which amount to 2,950 calories daily.

Before working out, Terry takes a pre-workout. During his training session, he ingests a combination of EAAs and L-Carnitine. Holland starts his routine by performing incline dumbbell bench presses, cable flyes, dumbbell flyes, machine incline presses with 3 45-lbs weight plates on each sleeve, and finally the pec deck for chest day.

“Finally made it home. Absolutely exhausted. All my food has gone in. Been up since really early this morning, so should sleep well tonight especially with the amount of carbs I’ve had. Yeah, it’s been a good diet” Terry Hollands said.

Terry is making sure to address prep thoroughly so that he presents his best package yet on stage. With his eyes on a May 8 show in London, all that’s left to see is how he fares in his anticipated return to bodybuilding.