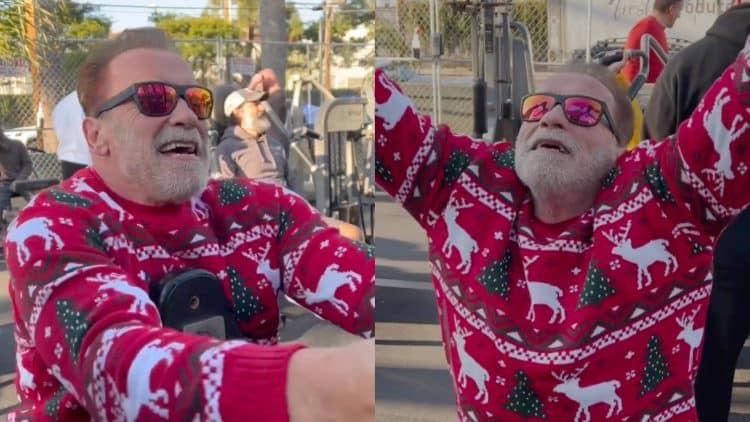 Legendary bodybuilder Arnold Schwarzenegger is easily one of the most popular and successful athletes in the sport. The seven-time Mr. Olympia winner has cemented his status as an all-time great and has a creative footprint that goes beyond bodybuilding. In a recent Instagram post, Schwarzenegger shared the holiday spirit with a Christmas workout.

Arnold Schwarzenegger gained popularity as a Men’s Open division competitor, taking home seven Sandow trophies during his days of competition in the 1970s and 80s. He is widely credited as one of the leading figures who helped elevate bodybuilding on the global stage. His starring role alongside fellow standout Lou Ferrigno in the documentary Pumping Iron (1977) skyrocketed the celebrity of bodybuilders in the mainstream.

In 1989, the IFBB launched an annual multi-sport event featuring bodybuilding, strongman, fitness, figure, and bikini shows in honor of ‘The Austrian Oak,’ called the Arnold Sports Festival. It is regarded as the second most prestigious event in the sport after Joe Weider’s Olympia Fitness & Performance Weekend.

Following two challenging years due to the COVID-19 pandemic, the organizers decided to remove a few divisions from the 2023 Arnold Classic. The decision drew the ire of the community, with two-time Women’s Physique Olympia winner Sarah Villegas expressing her disapproval over the choice.

Manager Matt came to the defense of Schwarzenegger about three months ago. He revealed that Arnold lost an eye-watering four million dollars putting on the contest in 2020 and praised his undying support for the game despite not making any money back. Arnold chimed in the discussion by expressing gratitude for the kind words and argued that he saw the show as an investment for the sport instead of a loss.

In a recent post uploaded to Instagram, Arnold Schwarzenegger shared the holiday joy with a Christmas training session.

“Merry Christmas! Use that holiday cheer to power up your pumps, and really enjoy your time with your family. Here’s my gift to you. Starting on Jan 1, I’m going to send a daily email with challenges, recipes, and health and fitness info to pump up my fitness crusade. It’s free.”

Arnold Schwarzenegger promotes a positive mindset and often leads by example. In October, he encouraged his 22.9 million followers on the photo-sharing social media platform to join in raising money for a children’s charity program. He offered private training sessions for $150,000 and was able to raise over 5 million dollars for the charity program.

Bodybuilding has come a long way since Arnold’s days of gracing the stage. He has been an outspoken critic of the mass monsters of today and called for a need to go back to the more symmetrical physiques of the past. He reiterated his stance on preferring muscle quality over mass after the 2022 Mr. Olympia wrapped up last weekend.