In spite of Hollands' best efforts, his return to Strongman will not be as expeditious as he had hoped. 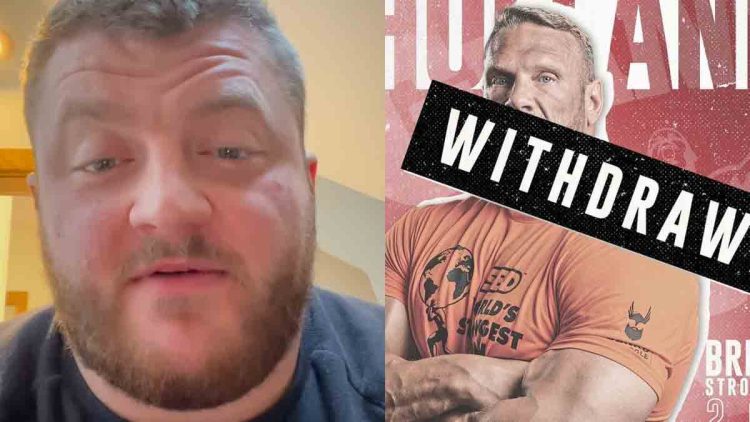 The first major Strongman competition of the new season will be the 2023 Britain’s Strongest Man, which will take place on January 26th, 2023, in Sheffield. However, just one week out from this competition, the 12-man roster took a massive hit, as both Terry Hollands and Luke Richardson withdrew from the competition. The replacements have already been found, as two rising stars of Strongman, Kane Francis and Cilléin Groom, stepped in.

Terry Hollands’ withdrawal from the 2023 Britain’s Strongest Man contest is definitely bad news for fans of the sport, as it was supposed to be his comeback from retirement. His impressive feats of strength and dedication to the sport made him one of the most prominent figures in the strongman community over the past decade.

Many were excited to see him compete again, and his withdrawal is a setback for those who were looking forward to watching him in action. Terry has not yet revealed the exact cause of his withdrawal, but according to Giants Live Instagram page, he suffered some kind of an injury. Furthermore, it is uncertain at this time if Hollands will be rescheduling his return from retirement for another event.

“Sorry for everyone that I won’t be competing, but for me at the moment, I am not in a position to do it… I need to have a social media break and just focus on being me for a few days and not Terry the Strongman or Terry the Bodybuilder.”

Luke Richardson, a well-known strongman athlete, also withdrew from the 2023 Britain’s Strongest Man contest. Similar to fellow competitor Terry Hollands, Richardson was set to make a comeback to the sport after being sidelined for a significant amount of time. However, his absence from the sport was not due to retirement, but because of a severe injury instead.

Luke Richardson suffered a bicep tear while training with Atlas Stones in 2022. Unfortunately, his troubles with injuries have not ended there. His recent withdrawal from the 2023 Britain’s Strongest Man was due to another injury, which Luke revealed on his Instagram. The incident happened during his final deadlift session prior to the competition, where Luke tore his lat muscle.

It is likely that Luke Richardson will be unable to compete in the 2023 World’s Strongest Man and Europe’s Strongest Man contests due to the injury he sustained. However, he is keeping a positive attitude, as he plans to come back stronger than ever.

“I’ve had to pull out from Britain’s Strongest Man because on Tuesday I tore my lat. It was my last session, it was like a taper deload session and my lat tore… I’ve got quite good at dealing with this stuff now, so it doesn’t faze me particularly.”

There was no doubt that the comeback of Terry Hollands and Luke Richardson represented one of the most exciting scenarios that could occur in a competition, but unfortunate circumstances prevented it from occurring. However, the 2023 Britain’s Strongest Man still has a lot of talent to offer. So, it will be an entertaining start to the season.