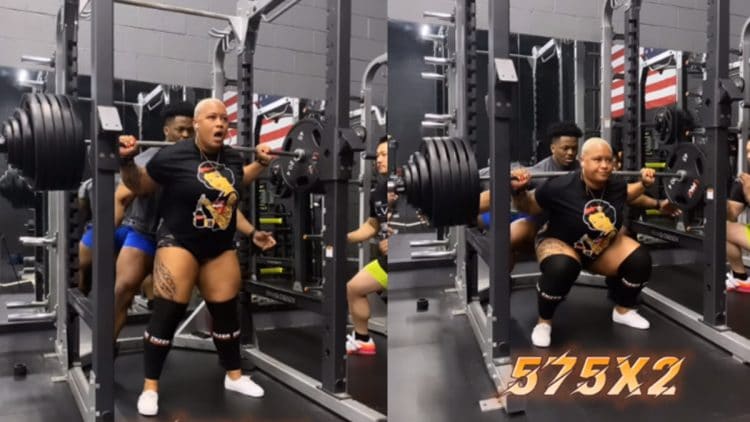 Marissa Wilson is working hard in the gym to become one of the standout athletes in the sport of powerlifting. By now, Wilson’s astounding squat strength is nothing new. For the past few years, Marissa has been on an upward trajectory, and she is still making a lot of improvements. Despite setting a new competition PR just a few months ago, she is now able to do multiple reps with that weight. The feats of strength Wilson has accomplished are not over. On May 2nd, Marissa shared a squat of 575 pounds (261 kilograms), which she did for incredible two repetitions. For reference, her competition PR is almost 20 pounds lighter.

To aid her in this feat of strength, Marissa Wilson only used a lifting belt and knee sleeves, meaning that it is raw by powerlifting standards. Marissa stated in the caption of the post that this is her new PR. She also took the opportunity to thank Tamara Walcott for her support. Tamara is one of the greatest female deadlifters in the world, and she is guiding Marissa to become the greatest in the squat event.

“I am at a loss of words to be honest. I am just beyond proud of myself!”

Marissa Wilson is just 4 weeks out of her next competition, where she will attempt to shock everyone. Marissa will compete at the 2022 USPA Drug Tested National Championships, which will take place from May 27-31, in Atlanta, Georgia. Her current bodyweight is not known, but she usually competes in the 90+ kilogram weight class.

Marissa Wilson is 30-years-old, but she is just now perfecting her lifting, and as a result, her results are improving drastically. She first started powerlifting in 2018 and has been gathering some valuable experience for the past 4 years. Marissa has taken part in a total of 8 sanctioned competitions throughout her career, and won six of them. She did not win any major contests yet, but is looking like a heavy favorite for this year’s USPA Drug Tested Nationals. Judging by her recent training performances, Marissa could easily beat all of her competition PRs as well.

All of her PRs were set just a few months ago at the 2022 USPA Drug Tested Hershey Winter Classic, as Marissa had an incredible performance.

Apart from chasing the heaviest squat possible, Marissa Wilson will also be aiming to Total 600 kilograms (1,323 pounds) for the first time in a sanctioned competition. The next four weeks will be crucial for her, but everything is pointing towards Marissa becoming the American National Champion.